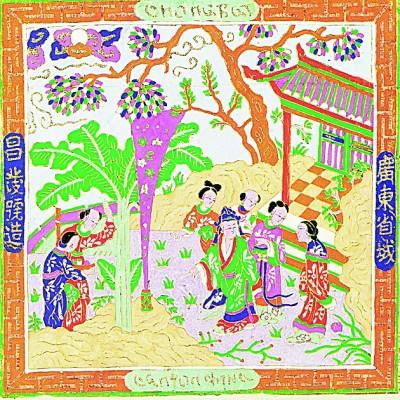 In recent years, in the field of paper-cut intangible cultural heritage, there has been a trend of "innovative and modern paper-cutting", breaking away from the genes and language of traditional Chinese folk paper-cutting, and promoting the so-called "Westernization" and "painting" of "de-folkization". Creation concepts such as "mechanization" and "commercialization" have temporarily caused confusion in the concept of inheritance and innovation in the paper-cut intangible cultural heritage world.

I am deeply disturbed by this.

As a professional researcher who has been engaged in rescue research on intangible cultural heritage for a lifetime, I would like to share my opinion on this.

"Folk" is the bottom line of intangible cultural heritage

"Folk" is the bottom line of non-genetic inheritance.

According to the relevant documents of intangible cultural heritage, the responsibility of contemporary intangible heritage inheritors is to adhere to the "civilian" first.

Only by guarding the right path and bottom line of "civil" can we carry on inheritance and innovation.

why would you say so?

Different from the elite culture, the intangible cultural heritage is completely created by the common folk laborers, and is the result of their continuous innovation from generation to generation.

If we abandon the bottom line of "folk", folk culture such as intangible cultural heritage will be alienated.

"Keeping the righteousness" is the foundation of inheritance

The inheritance of intangible cultural heritage paper-cuts should first emphasize the "inheritance" of "authentic", "true and unmistakable", and "comprehensive and systematic", rather than "creation".

This holistic inheritance is the true meaning of keeping upright, and it is also the first-class task of inheritance!

What is the "righteousness" to be observed in inheritance?

In my opinion, it does not refer to the general laws of artistic creation, but the laws of non-hereditary inheritance.

What is the inheritance to "pass"?

Some people think that inheritance is to teach one's own craftsmanship to apprentices and students, and to pass it on to the next generation.

In my opinion, this understanding is too one-sided and simplistic.

The so-called "original" inheritance is not only a skill, but also an artistic spirit. It is to restore and pass on the "undistorted" and "unchanged taste" of the skills and patterns handed down through the ages. This is the most important and most important. basically.

For example, Chaozhou paper-cutting has many ingenious techniques: Luo Ruiyu cut (carved) a rooster's comb, and created the dark knife method, also known as the pressing knife method, which can create a three-dimensional effect like a relief; Created a unique technique - "shredding" with extra-small scissors (that is, the serrated knife method); Li Mulin also created the technique of "double-sided, the same flower"... In the techniques they created, there is a deep hidden The professionalism and wisdom of the current paper-cutting must inherit the soul and life that cannot be discarded.

In addition, paper cutting must emphasize the power of scissors.

Paper-cutting is the art of forming specific vocabulary by the intersection and separation of scissors (engraving) and paper.

When cutting and engraving a work, the draft only plays the role of composition and layout. The real "shape", "potential" and rhythm and tension actually depend on the traces of the author's cutting (carving) knife.

The predecessors have summed up many classic patterns in the creative practice of the past dynasties, such as "Crescent Moon", "Sawtooth", "Whirlpool", "Fish Scale", "Rice Grain" and "Auspicious Cloud".

These stylized symbols have imprinted the imprint of the inheritance and innovation of the past dynasties of paper-cutting art. They are also the characteristics of Chaozhou paper-cutting art, and they are the right path that must be maintained during inheritance.

Chaozhou paper-cut masters often say: cutting a piece of paper is something that children can do, and it is easy to learn basic cutting methods; but if you want to master it, you have to spend a lot of time; if you want to further master the inheritance and creation, you need to " The ingenious combination of "technology" and "art" and the boundless imagination.

In the past, the old grandmother cut "flowers" of all kinds. She could cut anything you like, and cut it with her own hands. It is lifelike, because they have integrated technology and art into their blood.

"Innovation" is the development of Shouzheng

Using folk thinking, based on the soil and water in the countryside, innovating in inheritance, and inheriting after innovation.

Keep upright and then innovate. This is the road of non-genetic inheritance and development. Paper-cut artists of all dynasties have walked along this road.

"Offering Flowers" is a paper-cut that is used as a decorative offering by folk customs in Chaoshan area. It is a type of paper-cut with a unique form of expression.

This kind of paper-cut originates from the folk customs of the God Tournament and is rooted in the lives of the people.

In cooperating with the activities of the Ying Shen Contest, from the initial use of physical offerings for worship, to the use of simple paper-cuts for decoration, to the improvement of complex and beautiful paper-cuts, the inheritance and development of "offering flowers" is the best portrayal of integrity and innovation.

In the inheritance of thousands of years, the artists, on the basis of inheriting the essence of their predecessors, constantly modify and supplement, keep improving, and temper their skills to become more and more extraordinary, and become classics.

The classic maps that have been handed down to the present are mostly trimmed with objects and images, showing the diversity of subject content and expressions.

The artistic conceptions of these offering flowers are all derived from life and are very delicate.

Its shape is simple and flexible, and the layout and structure are arranged according to the creative method of appendages. It is the result of the collective integrity and innovation of Chaoyang women in the past dynasties.

(Author: Luo Yulin, a librarian at the Guangzhou Municipal People's Government Culture and History Research Institute, a professional researcher in cultural and museology)