Commemorating Leslie Cheung: Nineteen years after his death, when "the wind continues to blow"

China News Service, Beijing, April 1 (Liu Yue) April 1, 2022 is the 19th anniversary of Leslie Cheung's death. 19 years ago today, Leslie Cheung jumped from the 24th floor of the Mandarin Oriental Hotel in Hong Kong and ended his life.   The Sri Lankan has passed away for many years, and every time they think of him, many people still have mixed feelings in their hearts, and their regrets are b 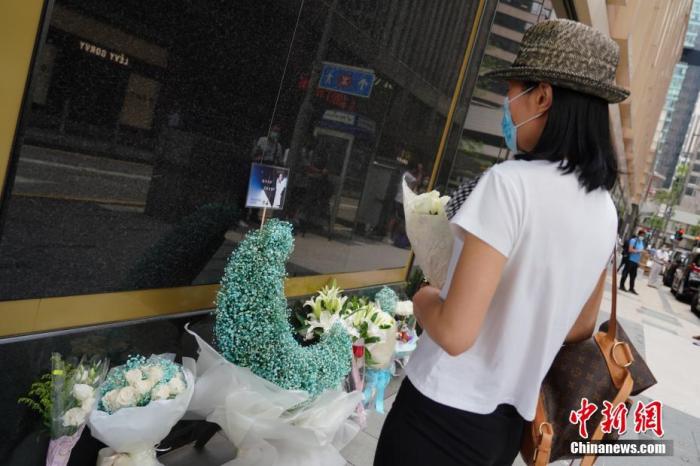 19 years ago today, Leslie Cheung jumped from the 24th floor of the Mandarin Oriental Hotel in Hong Kong and ended his life.

The Sri Lankan has passed away for many years, and every time they think of him, many people still have mixed feelings in their hearts, and their regrets are beyond words.

Data map: On April 1, 2021, fans and movie fans came to the Mandarin Oriental Hotel in Hong Kong to lay flowers and portraits in memory of Leslie Cheung.

Don't dream of idle people, only dream of gentlemen.

What kind of charm is it that after decades of spring and autumn, there are still so many people still fascinated by Leslie Cheung?

There is a color called "Red", and there is a "Peerless Youth" called Leslie Cheung

In 1977, he won the runner-up in Hong Kong's TV "Asian Singing Contest" and entered the music scene.

After working in the arts for decades, Leslie Cheung has left behind many popular classic songs.

the wind continues to blow

can't bear to stay away

There are tears in my heart, I don't want to cry, looking at you

who can take your place

Today I try to stand shoulder to shoulder with you again

That year's love is fresh again

The road of life is like a long road

The road is windy and frosty, and the face is dry

You are already destined to be rich or poor

I am I am a firework of different colors

The sky is wide and the sea is the strongest foam

I was born noble and beautiful

Get me Yan and Tian Qi

Back then, "Across the Four Seas" showed "The True Color of Heroes"

He starred in more than 50 films in total, and was nominated for Best Actor at the Academy Awards 8 times.

"The True Story of A Fei" Xu Zai

"I heard people say that there is a kind of bird in this world that has no feet. It can only fly and fly all the time. When it is tired, it sleeps in the wind. This kind of bird can only go down to the ground once in its lifetime, and that time it dies. when."

Screenshot of the movie "The True Story of A Fei"

"Many years later, I was nicknamed 'Western Poison'. Anyone can be vicious, as long as you've tried what it means to be jealous."

"Ten li Pinghu is full of frost, and every inch of blue silk is sad for the year. Looking at each other in the shape of the moon, I only envy the mandarin ducks and not the immortals."

Screenshot of the movie "A Chinese Ghost Story"

"Across the Four Seas" Azhan

"My name is Yazhan, thank you. I'm a thief. Read the newspaper tomorrow."

Screenshot of the movie "Across the Four Seas"

"When I was on the mission, I never thought of having such a brother."

Screenshot of the movie "The True Color of Heroes"

"I'm talking about a lifetime, a year, a month, a day, an hour, it doesn't count as a lifetime!"

Screenshot of the movie "Farewell My Concubine"

"When love is a thing of the past", we "Love you a thousand times in my life"

How to describe Leslie Cheung?

Under the picturesque brows, is a gentle gentleman's character.

Leslie Cheung took a precious and intimate photo with the stars during his lifetime.

One of Hong Kong's three famous mouths, Huang Zhan, a talented talent who has always been ruthless and pungent towards star artists, commented on Leslie Cheung: "Leslie Cheung is good-looking and has a good personality, so how can I not be partial to him? Leslie Cheung has a good character in him. Really, he is a very real person. In the entertainment industry, everyone keeps a third of what they say. But Leslie Cheung has everything to say, from heart to mouth, without a filter. This matter is the same as me, so I especially like him ."

Sincerity and sincerity are the impressions of most partners who have worked with Leslie Cheung.

Everyone likes to call him "Brother", although the source is no longer available, but this kind nickname also reflects Leslie Cheung's gentleness and affinity.

Dillon commented on his kindness and sensibility: "He loves himself, his career, and the friends around him. He is a very kind person."

Chow Yun-fat, who has collaborated with Leslie Cheung in "Across the Four Seas", described him as "perfect". "He is very good at acting, and he is also a good person. He is a perfect person."

When talking about his brother many years later, the already famous Tranquility also said when talking about the cooperation "New Shanghai Beach" that year, Leslie Cheung took great care of himself, who was a newcomer at the time, "He just loves me very much, he said that I must make a movie for you. ."

Someone once said that true death is to be forgotten.

With those moving melodies, classic characters and unique personality charm, Leslie Cheung, a hearty, gentle, always smiling brother, walked out of time, but stayed in the hearts of the audience. Even after many years, it still makes people fascinated and missed. .