China News Service, March 31 (Reporter Wang Shiyao) On March 31, the final results of the top ten new archaeological discoveries in the country in 2021 were officially announced.   Including ↓↓↓ (arranged by era) 01 Sichuan Daocheng Piluo Site Hand axe and thin-blade axe unearthed from the Piluo site Photo courtesy of Sichuan Provincial Institute of Cultural Relics and Archaeology   At the s 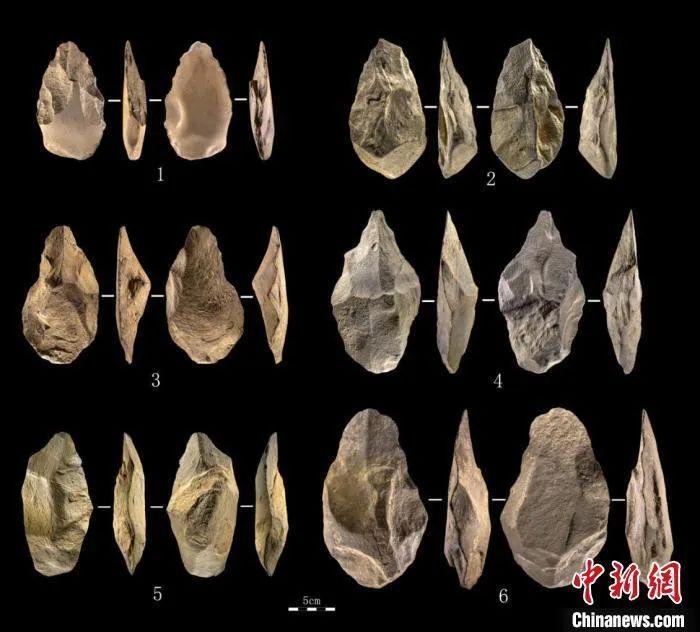 China News Service, March 31 (Reporter Wang Shiyao) On March 31, the final results of the top ten new archaeological discoveries in the country in 2021 were officially announced.

Including ↓↓↓ (arranged by era)

At the southeastern foot of the Qinghai-Tibet Plateau and 2 kilometers away from Daocheng County, next to the secondary tributary of the Jinsha River, the Piluo Site in Daocheng, Sichuan contains secrets.

Several excavation sites excavated at the site are about two meters deep at the deepest. The strata of the excavation section are intertwined with yellow and red. Yellow represents the cold period and red represents the warm period. Each stratum represents tens of thousands of years of time.

Experts believe that this completely resolves the dispute over whether China and East Asia have a real Acheulean technology system, and the academic argument that "Eastern early human culture lags behind the West" is purely prejudice.

Huangshan Neolithic Site is located in Huangshan Village, Nanyang City, about 3 kilometers away from Dushan Mountain, a famous jade mountain in China.

Archaeological experts believe that the Huangshan Neolithic site is a large central site spanning the Neolithic Yangshao Culture, Qujialing Culture, and Shijiahe Culture, involving the nature of jade tool making. It is the area that has been discovered in the Nanyang Basin. The largest site with the highest standard of relics and rich connotations reflects the social complexity and civilization process of the integration and development of cultural exchanges between the North and the South at that time. It is a key site for exploring the origin and cultural development of the Nanyang Basin and Jianghan Plain, and it is also a key site for the study of Chinese civilization. , a major discovery of Neolithic archaeology in China.

The Neolithic site of Jijiaocheng - the expansion process of the city wall and moat (top) and the site of a large house (bottom).

Jijiaocheng Neolithic Site is located in Jijiaocheng Village, Chennan Town, Li County, Changde City, Hunan Province. It is one of the four known prehistoric city sites in Hunan, and it is the central settlement of the Liyang Plain in the late Neolithic Age.

The Huanhao settlement evolved from the Youziling culture period to a large-scale city site in the Qujialing culture and Shijiahe culture periods, which is a microcosm of the prehistoric civilization process in the middle reaches of the Yangtze River.

The settlement structure of the triple ring moat was discovered for the first time in the Yangtze River Basin, which is of great value to the study of prehistoric settlement patterns.

The excavation of the Jijiaocheng site provides important data for the study of the origin of Chinese civilization and the formation of early states.

The site of Dawenkou Cultural City was found in the west of the site.

The Gangshang site in Tengzhou, Shandong is the largest prehistoric city site in the Dawenkou period discovered in the Haidai area. With the excavation of high-grade tombs and jade artifacts, its regional center status is particularly prominent.

The new archaeological discoveries of the Gangshang site have enriched the understanding of the connotation of the central settlement in the Dawenkou cultural stage in the southern Shandong area and even the entire Haidai area, and have important academic value for the study of the civilization process of the Haidai area.

The picture shows the cultural relics in the sacrificial pit of Sanxingdui.

The Sanxingdui site, discovered in the late 1920s, is the largest and highest-level central site in the Xia-Shang period discovered so far in the Sichuan Basin.

In 1986, Chinese archaeologists unearthed more than 1,000 precious cultural relics such as bronze statues and bronze figures in the rescue excavations of No. 1 and No. 2 sacrificial pits, which made the Sanxingdui site truly known to the world.

The Sanxingdui site continued from the Neolithic Age to the early Spring and Autumn Period. At that time, the Sanxingdui culture and Baodun culture coexisted in the Chengdu Plain, both belonging to the first phase of the ancient Shu civilization.

In the late Shang Dynasty, Jinsha culture emerged as an ancient Shu culture that was in the same vein as Sanxingdui and Baodun.

The Zhengjiahu Cemetery is located in Chengguan Town, Yunmeng County, Hubei Province. It is located in the southeastern suburbs of the city site of the King of Chu. It is about 1,000 meters away from the Longgang Cemetery and about 3,000 meters from the Sleeping Tiger Cemetery.

The main achievements of the excavation in 2021 are as follows: a batch of precious written materials has been unearthed. In addition to the wooden slips of dispatching policy, the most precious is the wooden gou (a kind of polygonal wooden slip) from the tomb M274 in the late Warring States period. There are 7 lines, each line contains more than 50 words, and the full text is about 700 words. It is the earliest "first long essay" in the era.

Unearthed a group of rare burial utensil paintings, dating from the end of the Warring States Period to the Qin Dynasty and the Qin and Han Dynasties. The themes are all first seen, filling the historical gap of the materials and types of paintings in the Qin and Han Dynasties. Thought and artistic modeling provided important materials; a large number of exquisite lacquer wood wares were also unearthed, well preserved and with distinctive regional characteristics, which provided important materials for the study of Qin and Han lacquer ware production and circulation and arts and crafts.

Data map: A perspective view of the excavation site of Jiangcun Tomb No. 1 taken on May 15, 2019.

Since 2006, archaeologists have conducted many investigations, explorations and trial excavations in the Jiangcun tomb area, and found that the Jiangcun tomb is in the shape of "Asia", and the ground is not covered with soil.

The side of the tomb is 72 meters long and surrounded by 115 outer pits.

In addition, a variety of techniques were used to detect the "Phoenix Mouth", and it was confirmed that there were only more than 10 clear stone tablets in the Qing Dynasty, and no mausoleum remains were found.

Among them, the tomb of King Xi Murongzhi located in Chashan Village, Qilian Town, Tianzhu Tibetan Autonomous County, Wuwei City is the only well-preserved tomb of the Tuyuhun royal family found so far.

The ancestors of the Tuyuhun people were the Murong clan of Xianbei in Liaodong, and then their branches moved westward to the border areas of Qinghai, Gansu, Sichuan and other provinces, and gradually developed into an independent country, and finally surrendered to the Tang Dynasty.

There are more than 800 pieces of various funerary objects such as textiles and lacquer wood unearthed in the tomb, including wooden hu beds, six-curved screens, complete sets of military equipment mainly composed of iron armors, pen, ink, paper, inkstone and other stationery items, all of which are of the same period in China. The first or rare find of its kind.

Photo courtesy of Xinjiang Institute of Cultural Relics and Archaeology

Located in the desert of Yuli County, Xinjiang, the Keyakkuduk beacon site is one of the beacon groups of the Kongque River, and it is an important military defense and information communication facility on the ancient Silk Road.

After archaeological excavations, the Keyakkuduke Fengsui site was identified as a grass-roots military management institution under Yanqi Town, one of the four towns of Anxi in the Tang Dynasty.

After 10 years, the archaeological excavation work at the Keyake Kuduk Fengsui site in Xinjiang has been basically completed.

More than 750 paper documents and more than 120 wooden slips unearthed in the ruins are the largest batch of Tang Dynasty Chinese documents unearthed in China's domestic archaeological excavations in recent years, and have become the living materials for restoring the life of the frontier soldiers in the Tang Dynasty.

Data map: The stele of the Daming Emperor's Mausoleum located in the Tomb of the Ming Dynasty in Fengyang, Anhui Province.

Fengyang Ming Zhongdu City was built in the second year of Ming Hongwu (1369 AD), and it took a population of one million to build it for 6 years.

Archaeologists focused on the excavation of Tushan Gate and the palace area, and clarified the layout of the palace foundation and some ancillary buildings in the former court area in the palace city.