Exploring the Beijing Antigen Self-Test: Limit the purchase of five per person, and some pharmacies call "can't get it"

China-Singapore Jingwei, March 30 (Lin Wansi) The new crown antigen self-test product has attracted much attention since its inception, and pharmacies caught between downstream consumers and upstream manufacturers are caught between ice and fire.   "It's all about grabbing now. The company's goods are not enough. Whoever applies first will give it to the other." On the 30th, Sino-Singapore Jing 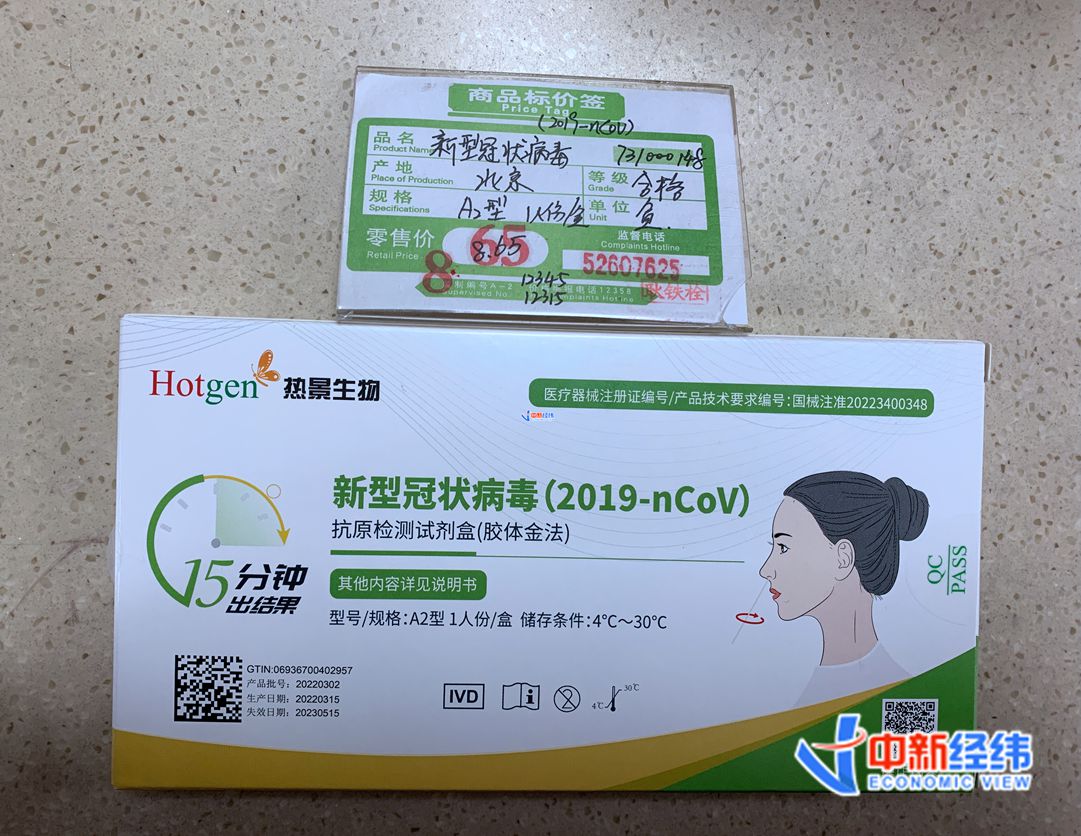 China-Singapore Jingwei, March 30 (Lin Wansi) The new crown antigen self-test product has attracted much attention since its inception, and pharmacies caught between downstream consumers and upstream manufacturers are caught between ice and fire.

"It's all about grabbing now. The company's goods are not enough. Whoever applies first will give it to the other." On the 30th, Sino-Singapore Jingwei visited an offline chain pharmacy in Beijing. A salesperson of a pharmacy that was out of stock told Sino-Singapore Jingwei that they didn't know what to do. Time to arrive, currently only available for pre-order.

There are also pharmacy sales staff who said to Sino-Singapore Jingwei, "It's been four or five days since it arrived, and you are the first to buy it."

"Not many people buy, but one person is limited to 5"

The sales staff of Tongrentang told Sino-Singapore Jingwei that customers who purchased the new crown antigen test kit were not allowed to enter the store, and were required to register their name, ID number, address, mobile phone number and other information.

"People who bought it are okay, not too many. Four or five days after arrival, you are the first to buy it." Tongrentang sales staff brought the new crown antigen detection kit sold in the store to Sino-Singapore Jingwei. The manufacturer is Beijing Hotjing Biotechnology Co., Ltd. (hereinafter referred to as Thermal View Bio).

Sino-Singapore Jingwei observed that the product adopts the colloidal gold method, and the result can be obtained in 15 minutes.

"In the first two days, there are also orders from units, and you have to queue up with your ID card to buy this thing. This thing cannot be bought on your behalf." The above-mentioned salesperson said.

Some pharmacy sales staff also told Sino-Singapore Jingwei that because of the late "start", the store did not wait for the kit.

On the morning of the 30th, Sino-Singapore Jingwei called Baikang Pharmacy in Fengtai District. The other party said that the

new crown antigen detection kit had been sold out, and "come back in the afternoon to see."

"The company's goods are not enough, and some stores have not received the goods."

Golden Elephant Pharmacy told Sino-Singapore Jingwei that it does not know when it will arrive and can only make reservations. "I am not sure how many people have made reservations, but they should quite a few".

In terms of price, Sino-Singapore Jingwei visited Tongrentang, Jiashitang, Guoda Pharmacy and other stores and found that the price of the kits sold by the stores is the price of one-person kits from Rejing Bio and Beijing Jinwofu Bioengineering Technology Co., Ltd. (hereinafter referred to as Jinwofu). Both are 8.65 yuan, and the sales staff of Tongrentang and Guoda Pharmacy both mentioned that one person is limited to five purchases.

"At the earliest, it was more than 24 yuan, but it dropped to 8.65 yuan in the first two days. The price was limited by the state, and we basically had no profit. After mass production, the cost will also come down." Tongrentang sales staff told Sino-Singapore Jingwei.

The sales staff of Jia Shi Tang also told Sino-Singapore Jingwei that the price of the new crown antigen test kit is basically "flat to flat", and the pharmacy will sell it as much as the ex-factory price, and it will be implemented according to the price set by the state.

Beijing has temporarily included the new coronavirus antigen detection reagents and corresponding detection items into the basic medical insurance medical service project catalog, and the medical insurance fund will pay and reimburse according to regulations, and the total cost of each test should not exceed 11.37 yuan.

At present, there are 406 designated retail pharmacies in Beijing that are qualified to sell antigen testing reagents, and the maximum sales price of testing reagents cannot exceed 8.66 yuan per person.

At present, products from Jinwofu, Rejing Bio, Wanfu Bio, Mingde Bio and other manufacturers can be purchased in multiple e-commerce drug buying channels. Between RMB 20, the estimated delivery price for 20 people is between RMB 216 and RMB 328, and the delivery to Beijing is estimated to be delivered within 1-3 days.

Some pharmacies said that there is no channel for reporting negative test results, and the test results will not be synchronized with the health treasure, and the products are only for self-screening.

"There is a drawback.

the community will call to follow up after the purchase, and residents can report the results

The salesperson believes that

generally buying is not for hoarding, because the validity period is only 6 months, it is not realistic to hoard, since it is bought, it must be used.

Tongrentang sales staff told reporters that after purchasing the new crown antigen detection kit, you can use WeChat to scan the QR code on the product box, watch the video of use, and follow the instructions for self-testing.

After washing hands, Zhongxin Jingwei puts the sampler on the side of the nostril, and goes back 1-1.5 cm along the bottom of the lower nasal passage, then sticks to the nasal cavity and rotates around for 15 seconds. Same operation.

Next, Sino-Singapore Jingwei unscrewed the small white cap on the tube cover, added 4 drops of sample liquid to the sample hole (S) of the test card, and observed the results after 15 minutes.

It should be noted that if a red band appears in both the detection area (T) and the quality control area (C) of the test card, it is a positive result.

Once the self-testing residents are found to be antigen positive, they must fulfill their reporting responsibilities.

The "Law of the People's Republic of China on the Prevention and Treatment of Infectious Diseases" and other laws and regulations expressly stipulate that citizens have the responsibility and obligation to report infectious diseases.

In addition, after the new crown antigen detection kit is used up, be sure to package the used disposable samplers, sample processing tubes, etc., and do a good job of garbage classification when discarding.

After the reporter experienced the self-test, they found that there was no strong discomfort during the test process, the speed was fast, and the operation was relatively simple.

On March 15, Jiao Yahui, director of the National Health and Health Commission's Medical Administration Bureau, said at a press conference that antigen testing is an important means of screening and an important supplement to nucleic acid testing. It is necessary to give full play to the "early" and "early" and "Fast" has two advantages.

Antigen detection can identify the possible infected persons as soon as possible, and use the shortest time to control the source of infection, assisting Improve early detection capabilities with large-scale nucleic acid screening.

On the same day, Li Jinming, deputy director of the National Health Commission's Clinical Testing Center, said at a press conference that one of the features of antigen testing is that it is quick and easy.

Li Jinming said that for antigen testing, if an individual is infected with the new coronavirus, the virus content in the pharynx has a process from less to more. If the amount reaches 1 million or even 10 million per milliliter, most of it can be done through antigens.

At this time, antigen screening is added to relevant key groups, and the spread of the epidemic can be quickly controlled through antigen detection.

Li Jinming said that when comparing antigen detection with nucleic acid detection, its specificity is different.

Therefore, nucleic acid testing has always been the basis for determining new crown infection, and it is the "gold standard".

When the antigen test is positive, the nucleic acid test must be used for confirmation.

However, if the nucleic acid test is positive, regardless of whether the antigen test is negative or positive, the subject must be treated as a new crown infection or a confirmed patient to take measures.