Inheritance of Liaoning Porcelain Inheritance: Passing on Chinese Traditional Culture in a Moment 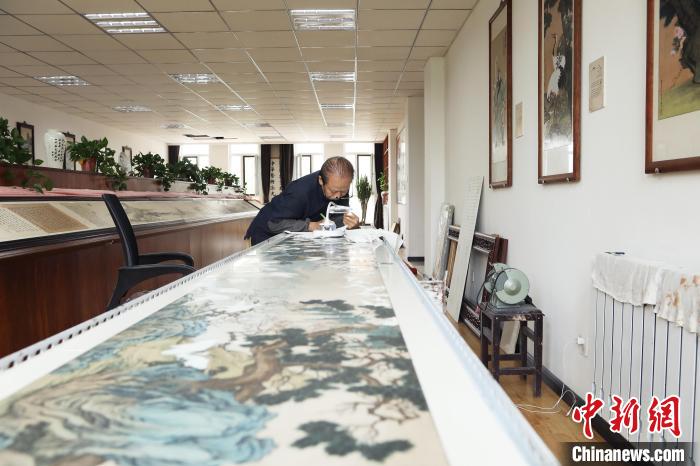 "Porcelain as paper and knife as pen", Zhong Liwei, the representative inheritor of Liaoning Province's intangible cultural heritage engraved porcelain project, has presented the engraved porcelain works carrying traditional Chinese culture to people in a single moment. in front of you.

Recently, the reporter walked into Zhong Liwei's studio to listen to the echoes of the interweaving of porcelain and culture.

"Porcelain carving", known as the danqing on porcelain, is a traditional art that integrates painting, calligraphy, and engraving, and integrates brush, ink, color, and knife.

Zhong Liwei said that Zhong's carved porcelain is carved on the fired porcelain with special knives. People, landscapes, flowers, plants, animals, etc. can be "embroidered" on the porcelain. The artistic effect of touch has the feel, and the view has the brush and ink”.

In Zhong Liwei's studio, the reporter saw works such as "Orchid Pavilion Preface" and "Mrs. Guo Guo's Tour in Spring". These works look like paintings, but when you touch them with your hands, you can find that every line is a quarter of a knife, with the charm of a knife and a knife.

When it comes to engraving porcelain, 68-year-old Zhong Liwei is incessant. He said that engraving porcelain is a unique skill from the palace to the people. The craftsmanship process is very particular. It is composed of processes such as sealing porcelain, and comprehensively uses a variety of knife methods such as the drilling method, the double hook method, and the scraping method to express the perspective effects of light and shade, distance and nearness of the picture, so as to achieve both "golden stone interest" and "brush and ink rhythm". artistic conception.

As the saying goes, "don't work on porcelain without diamonds".

Zhong Liwei said, "In order to achieve the ultimate in the art of porcelain carving, you must not only have a solid foundation in fine brushwork painting, but also have attainments in calligraphy. Unlike painting, carving porcelain can be modified like painting. If you cooperate, the porcelain plate will be broken by one more point, and one less point will have no effect." Now, Zhong Liwei's hands are full of calluses because he has been holding the knife for a long time. , but he always insisted.

"'Persistence' may be the spiritual meaning of this skill." Zhong Liwei said, as the third-generation inheritor of Zhong's carved porcelain, he grew up with the sound of his grandfather and mother's jingle of knives and chisels. At first, he was curious and fun enough to study the porcelain culture with his understanding of the art of carving porcelain and to inherit and carry it forward. It was his persistence and special liking that made him what he is today.

According to reports, Zhong Liwei's works are mainly based on themes such as traditional Chinese Fulu culture, portraits, and famous calligraphy and painting, and each work contains his ultimate pursuit of porcelain carving skills.

Among them, the engraved porcelain work "Fuchun Mountain Residence", which is 10.08 meters long and 0.4 meters wide, is his proud work, and this work won the "Gold Award" at the first China (Kaifeng) Arts and Crafts Fair.

He said that this work was the result of a one-year and four-month period he and his daughter carved with millions of knives and 13 porcelain plates.

From calligraphy, painting to seals, it can be said that this work shows his porcelain carving skills. He hopes that he can use rigorous methods to restore classic works rich in traditional Chinese culture.

"Every carved porcelain work, no matter how big or small, is purely handmade, and each piece is unique and cannot be copied." Zhong Liwei said, "If you do one thing well in your life, you will be successful."

From the childhood carving to the white head, Zhong Liwei, who is in his sixties this year, has been thinking about inheritance: how to spread this craft to more young people.

In recent years, Zhong Liwei's artworks have been collected by many international and domestic collectors in Japan, Germany, and France.