A Russian Soyuz rocket with 36 OneWeb constellation communications satellites is already on the launch pad at the Baikonur Cosmodrome in Kazakhstan. His... 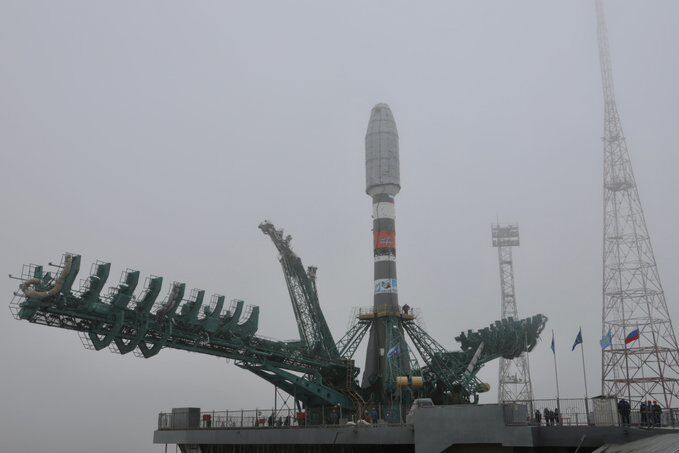 with 36 OneWeb constellation communications satellites is already on the launch pad at the Baikonur Cosmodrome in Kazakhstan.

Its launch is scheduled for tomorrow, but everything seems to indicate that it will not take off in the end.

Russia is beginning to specify the threats it launched last week to the international community due to the sanctions imposed after the invasion of Ukraine.

Dmitry Rogozin, director of Roscosmos, the Russian space agency, has said that his country will not launch the

rocket unless its demands are met, something that seems unlikely considering its nature.

On the other hand, Roscosmos has reported this Thursday that it

will stop selling rocket engines to the US

not cooperate with Germany in joint experiments in the Russian segment of the International Space Station (ISS).

From now on, the Russians will do them independently.

"The Russian space program will be adjusted to the context of sanctions and the priority will be the creation of satellites in the interests of defense," said the head of Roscosmos.

Meanwhile, the launch of the OneWeb satellites is still up in the air.

On the one hand, the Russians want to be assured that these satellites will not be used for military purposes.

And secondly, they demand that the British Government, a shareholder of OneWeb, leave the company.

"Due to the UK's hostile stance towards Russia, another condition for the launch of the OneWeb spacecraft is the British government's withdrawal of OneWeb shareholders," said Dmitry Rogozin.

OneWeb was founded in 2012 (originally as WorldVu Satellites Ltd.) by the American entrepreneur and engineer Gregory Wyler with the aim of facilitating Internet access throughout the world, including remote and rural areas that it does not reach.

The company's headquarters are in London, it has offices in Virginia, and the satellites are manufactured in Florida.

In 2019, the first satellites of the constellation were launched - LEO satellites, that is, those that operate in low Earth orbit.

The plan to deploy a large constellation of satellites was blown up in March 2020, when the company went bankrupt.

in November of the same year, each acquiring 42% of the shares.

So far they have put about 650 artifacts into orbit and have 200 left to complete the initial constellation.

rocket with the company's satellites on board was driven to the Baikonur launch pad on Tuesday, but on Wednesday, the Russians gave until Friday for their demands to be met.

Otherwise, they will remove the rocket from the platform and cancel the launch from the Kazakh cosmodrome, the cradle of the space race - from here the dog Laika, Yuri Gagarin and Valentina Tereshkova took off.

After the dismantling of the USSR, this Soviet spaceport remained in the territory of Kazakhstan, so Russia reached an agreement with the new country to continue using its facilities in exchange for a millionaire annual contribution.

In principle, it plans to use it until 2050, although in 2011 it launched a new and modern cosmodrome, Vostochny, in the remote Amur region, from which it has already made several launches, including the OneWeb constellation satellites that may now be affected their deployment for war.

Some of OneWeb's launches have been carried out from the European Spaceport in Kurú, in French Guiana, such as the one on February 10, the first that the telecommunications company carried out in 2022. 34 satellites were launched, although they were also aboard a

Russian personnel deployed in French Guiana are leaving the facility in response to international sanctions, which is forcing the reorganization of the next planned launches of satellites and ships that were to be carried by Russian vehicles.

Astrophysics They discover a third planet in the closest star, Alpha Centauri

StoriesThe scientists who follow the foot of the La Palma volcano: "Now is the time to enjoy it"