What happened to Putin's desire to include Russia in NATO?

During interviews broadcast by Showtime via the documentary “Putin Interviews,” the latter stated that he had once raised the possibility of Russia joining NATO with former President Bill Clinton, and that Clinton said he had no objection. 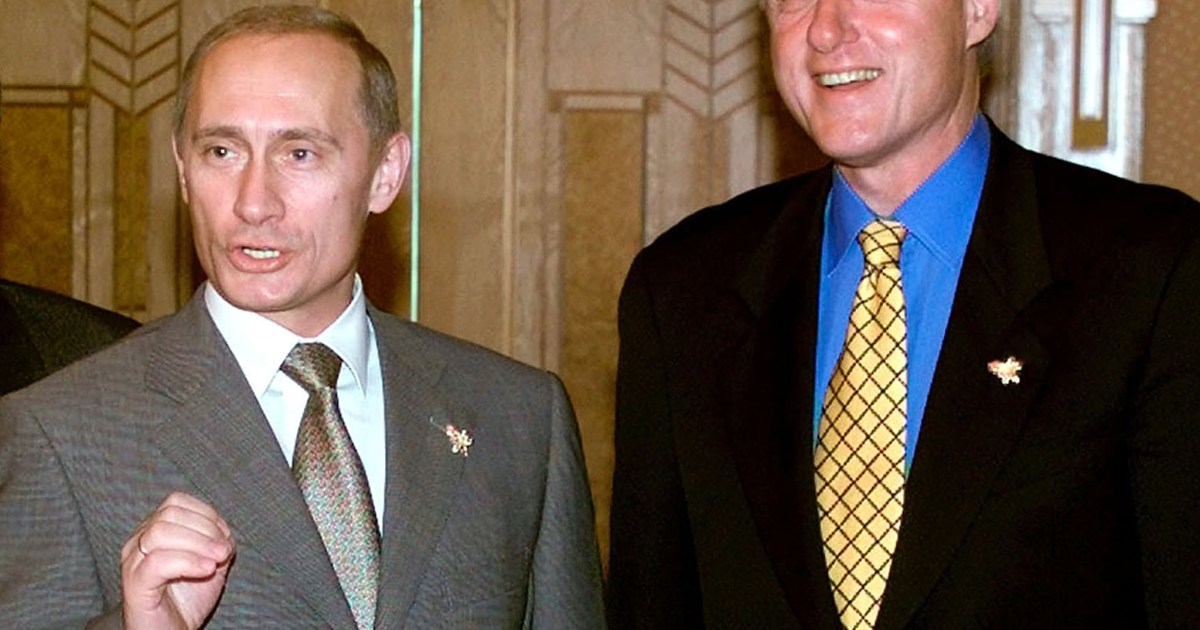 Russia, led by President Vladimir Putin, launched a war against Ukraine for several declared reasons, foremost of which is the threats posed by Ukraine's ambition to join NATO.

At the same time, Putin reiterated Russia's concern about the possibility of Ukraine joining NATO, demanding strict guarantees from the United States and its allies that this would not happen, as Putin asserts that NATO's eastward expansion and approach to Russia's borders is unacceptable.

In an old television interview, he was interviewed by David Frost, the famous BBC journalist;

Putin was asked weeks before taking office if it was "likely that Russia would join NATO," and Putin replied, "Why Not."

Putin told Frost that he would not rule out joining NATO "if Russia's views are taken into account as those of an equal partner."

On the American side, President Joe Biden asserts that placing a Russian veto on Ukraine's accession to NATO is unacceptable and categorically rejected.

However, a little immersion in the political archives over the past three decades reveals another face of President Putin that is completely different from the hostility and existential threats that he sees now from NATO against Russia.

During several interviews broadcast by the "Show Time" network through a documentary film entitled "The Putin Interviews", conducted by the famous American director Oliver Stone, and shown in 2017, Putin mentioned that he once raised the possibility of Russia joining NATO with former President Bill Clinton 2000, and that Clinton said he had "no objection".

According to the Russian president's account, these words made the entire American delegation accompanying President Clinton very nervous.

"Bill Clinton and I, as well as with George Bush, talked about the possibility of Russia joining NATO," Putin told Oliver Stone. "Look where we are now, with NATO approaching our borders."

In another old television interview, David Frost, the famous BBC journalist, interviewed him;

Putin was asked weeks before taking office if it was "likely that Russia would join NATO," and Putin replied, "Why Not."

Putin told Frost that he would not rule out joining NATO "if Russia's views are taken into account as those of an equal partner."

For Putin, it was difficult to imagine NATO as an enemy, Frost said. "Russia is part of European culture, and I cannot imagine my country isolated from Europe, and what we often call the civilized world," he said.

As Sir George Robertson, the former Secretary General of NATO, notes, President Putin wanted to join the alliance early in his rule.

Robertson recalled an early meeting with the Russian president when Putin told him, "When are you going to invite us to join NATO?"

"Well, we don't invite people to join NATO, they apply to join the alliance," Robertson replied.

Putin replied, "Well, we don't stand in line with a lot of countries that don't matter."

The North Atlantic Treaty Organization (NATO) was founded in 1949 from 12 countries led by the United States, then 4 countries joined in the 1970s and 1980s, and the number became 16 when the Cold War era ended in the early 1990s.

The United States respected previous pledges not to include any of the former members of the Warsaw Pact or the former Soviet republics of the alliance, but this changed over time.

A number of former Soviet republics joined the alliance, until the number of its member states reached 30 countries, and the official borders of the alliance reached the Russian borders bordering Estonia, Latvia, Lithuania, and Poland.

NATO expansion measures contradict the pledges the Soviet Union obtained from Washington and the rest of Western capitals in the German reunification talks in 1990. During a meeting between then-US Secretary of State James Baker and Soviet leader Mikhail Gorbachev on the future of European security, Baker famously said, “Not an inch to the east.” ", in an explicit confirmation that Washington does not intend to expand NATO to the east.

Washington believes that Moscow did not object in the past to NATO expansion, and that this only began when missile defenses were placed in Poland and Romania, and some interceptors in the Czech Republic.

At that point, Putin started talking about NATO's use of these neighboring territories to threaten Russia's interest.

In his book "The Great Delusion: Liberal Dreams and International Realities" published in 2018, the famous professor John Mearsheimer says that "Russian leaders after the unification of Germany believed that their Western counterparts understood their fears of NATO expansion to the east, and that the alliance would not expand towards the Russian borders, but the Clinton administration believed On the contrary, in the 1990s I began to push the expansion of the coalition eastward."

But by 2008, NATO had officially adopted a policy revealing its "open door to Georgia and Ukraine" policy.

One of the leaked WikiLeaks documents indicates that Bill Burns, the former US ambassador to Moscow (currently heading the Central Intelligence Agency), wrote on February 1, 2008 a highly classified telegram addressed to then-Secretary of State Condoleezza Rice, in which he confirmed that Putin would look at Any move towards the membership of Ukraine and Georgia in NATO is considered a serious and considered challenge, and Russia will respond quickly.

"This will create fertile ground for Russian intervention in Crimea and eastern Ukraine. The potential for a subsequent Russian-Georgian conflict will be very high," Burns warned.

NATO denies Russian accounts of talk of Russia joining the alliance, and claims that the alliance has always had the view that it is an alliance of democracies.

NATO says that it does not pose any threat to Russia and that it is a defensive alliance, and the coming days and months will show if the alliance is really defensive, or it will be offensive, and Russian President Vladimir Putin may determine this personally.