Jung Ho-yeon's 'Daenggi Meori' shines at SAG... I fell in love with the US fashion map 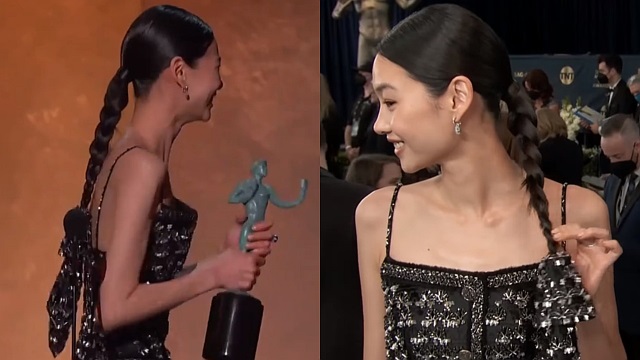 At the 28th American Actors Guild Awards ceremony held in Los Angeles on the 27th local time, Jung Ho-yeon won the Best Actress in a TV Drama for 'Squid Game'.

Jeong Ho-yeon, who not only won trophies by defeating prominent Hollywood stars such as Jennifer Aniston and Reese Witherspoon, but also wrote a record for her acting debut, went on stage and said, "I am truly honored to be here. The 'Squid Game' that made my dream come true I love the team," he said in tears.

On this day, Jeong Ho-yeon appeared in a gorgeous black silk dress made by hand-embroidered sparkling crystals and silver beads.

The dress is a product of luxury brand L, where Jeong Ho-yeon is working as a global ambassador, and it is known that it took 210 hours to make the dress.

In an interview with American entertainment media 'E!', Jeong Ho-yeon revealed, "She wore an L," and she said, "She wants to add a traditional Korean element to her glam look, so she asked me to make a Korean headdress, Daenggi. requested," he said.

The MC who was in charge of the interview at the time was also admiring Jeong Ho-yeon's styling, saying, "It's so beautiful. I want one too."

In addition, Vogue praised Jung Ho-yeon, saying, "Jung Ho-yeon is a person who can combine classic Hollywood charm with Korean tradition in a modern way."

Jenny Jo, a famous Korean hair stylist in Hollywood, who was in charge of styling Jung Ho-yeon's hair, also revealed the process of styling Jeong Ho-yeon's Daenggi hair through her Instagram, introducing it as "a bundle method presented with her traditional Korean costume, Hanbok."

Domestic netizens also praised Jung Ho-yeon's styling, saying, "Jung Ho-yeon has proven that the most Korean is the most global."

At the awards ceremony that day, 'Squid Game' won three awards, proving that it is the best series of 2021.

It won the Best Actor Award (Jung-jae Lee), Best Actress (Ho-yeon Jeong), and Stunt Ensemble Award in the TV Series category, earning the most awards in the TV series category.

This is a historic record for the first time a foreign language drama has been nominated or won an SAG nomination.