Visiting the earliest institution of higher learning in China: the site of Jixia Academy is confirmed

China News Service, Zibo, February 25th: Visiting China's earliest institution of higher learning: the site of Jixia Academy is confirmed   Author Li Mingrui   Recently, the location of the site of Jixia Academy, the earliest institution of higher learning in China, has been determined, which has aroused widespread concern in the archaeological community. On the 25th, a reporter from China New 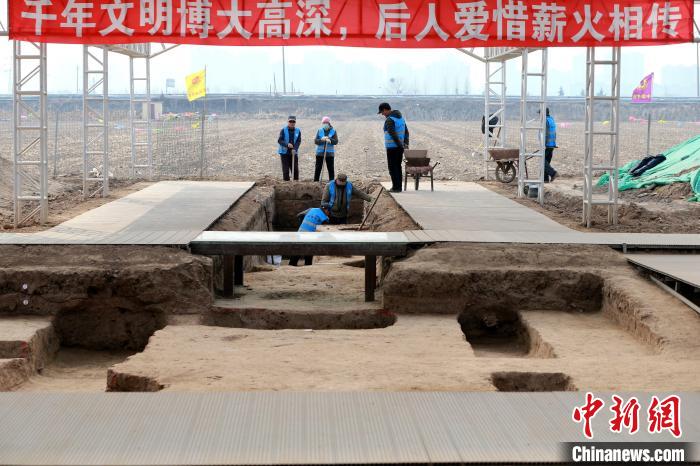 Recently, the location of the site of Jixia Academy, the earliest institution of higher learning in China, has been determined, which has aroused widespread concern in the archaeological community.

On the 25th, a reporter from China News Agency visited the construction site group outside the west gate of the ancient city of Qi, located in Linzi District, Zibo City, Shandong Province.

According to archaeologists, after nearly five years of archaeological excavations, it can be determined that this is the site of Jixia Academy.

The reporter saw at the excavation site that day that archaeologists were cleaning up historical remains such as pottery and tiles with hand shovels and brushes, unveiling the "mystery" of Jixia Academy of higher learning.

The site of Jixia Academy.

According to historical records, Jixia Academy was built in 374 BC, named after its location near Jimen in Linzi, and has existed for more than 150 years.

Jixia Academy is the world's first institution of higher learning in a special form that is officially run and privately run.

"We used the 'exclusion method' to solve a series of questions. The stratigraphic relationship is clear, and the shape has begun to take shape. From the literature, orientation, archaeological discoveries and other aspects, it can be judged that this is the Jixia Academy." According to Shandong Provincial Cultural Relics and Archaeology Dong Wenbin, associate research librarian of the research institute and team leader of the Jixia Academy Archaeology Project, introduced that the building base group is connected to the small town of Qi Gucheng in the east. The total area is nearly 40,000 square meters, and now 2,000 square meters have been excavated. A total of four rows of building foundations have been found, which is similar to the scale of a modern university.

Archaeologists are cleaning up historical relics such as pottery and tiles with hand shovels and brushes.

Dong Wenbin further explained the basis for the determination of the Jixia Academy site.

The archaeological team conducted carbon 14 dating of the soil layer under the hardened square excavated, and the results showed that it was from 400 BC to 390 BC, which was just slightly earlier than the period of Duke Huan of Qi (Tian Wu).

According to historical records, Jixia School started from Duke Huan of Qi (Tian Wu), and the determination of carbon 14 matches the time recorded in the literature.

At the same time, the scale of Jixia Academy is huge, "to open up the bridge of the Kangzhuang, the high-door mansion", and the scale of the site excavated is also consistent with this.

"To sum up all the clues, we can confirm that the site being excavated is the site of Jixia Academy."

In addition to the foundation site of the building, archaeologists have also discovered a large number of relics such as tiles, floor tiles, Qi Da Dao Qian Fan, pottery and other remains in the Jixia Xue Palace site.

Dong Wenbin told reporters that Jixia Academy has contributed to the formation of the situation of "a hundred schools of thought contending" in the world's academics, and it is a monument in the history of Chinese ideological and cultural development.

As an institution, Jixia Academy is more meaningful in its historical and cultural status, and the cultural relics that can be excavated and studied in the site are relatively limited.