Rosalía and her conclave of 'motomamis' in Ukraine

There is a month to go before Rosalía's long-awaited third album, Motomami, is released, and each new detail that is known feeds even more the already enormous... 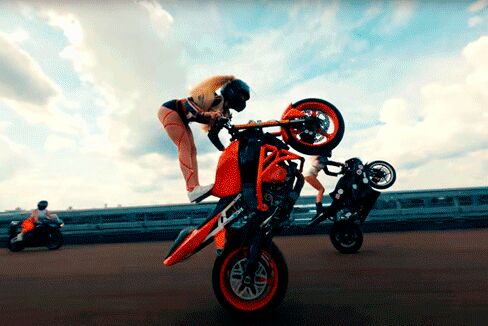 , and each new detail that is known further fuels the already enormous expectation.

The second preview of the album,

, which the Catalan shared a few days ago, has seduced everyone for its experimentation and because it is absolutely impossible to get it out of your head: the ultra-catchy rhythm of reggaeton, the unexpected jazz piano, a letter between existential metaphysics and

, allusions to god, Greek mythology and drag queens... And Rosalía, who this time sounds so different when she speaks and when she sings and, however, is more her than ever.

The song, as they say, goes like a motorcycle.

And the video clip is full of them.

was recorded a few months ago in

when the escalation of tensions experienced in recent weeks had not yet placed Ukraine in the eye of the international political storm.

Before Vladimir Putin threatened to invade the country, Rosalía and a large group of

to the Ukrainian capital to shoot a video clip full of

on wheels, with an aesthetic to the

(night police chase included) but in

Directed by the Frenchman Valentin Petit,

with which Rosalía conquered the world four years ago -what in

were trucks, here are Yamaha R6 and Honda CBR 600- but if he will be remembered for something, it is for the spectacular

of bikers and their amazing tricks on the Podilsko-Voskresenskyi bridge in Kiev.

have participated in the video , a relatively emerging phenomenon (the motor world has never shone especially for its equality, although things have changed rapidly in the last decade) that does not stop growing and adding fans. .

Rosalía has managed to bring together the Czech Katerina Jandová, the North American

(an influencer, with more than 600,000 followers on Instagram) and the Ukrainians

, the first champion in the women's motorcycling category of the country in 2011.

, by the way, Rosalía is heard singing

, but nothing is further from reality: the person in charge of styling the video is

, one of Chloë Sevigny's favorites and the culprit that the artist and her Amazons wear pieces specially made for the occasion by

(the guru of empowerment via the corset and latex), a vintage top by Jean Paul

(which Kylie Minogue already wore in

) and also Ukrainian brands such as the lingerie firm Zhilyova, responsible

The aesthetic is very 2000 (or 2YK, as they say now), it has something of Harmony Korine's

(those reflective bikinis) and a lot of Japanese anime: beyond Akira, motorcycle helmets with cat ears (one of the most successful models of the Russian firm

) and the long pink pigtails a la

are a version of

brought to the suburbs.

MusicRosalía gets naked on the cover of her third album, Motomami

MusicThe best songs of the week: Carolina Durante and the impudence and the bad milk and the melodic hooks