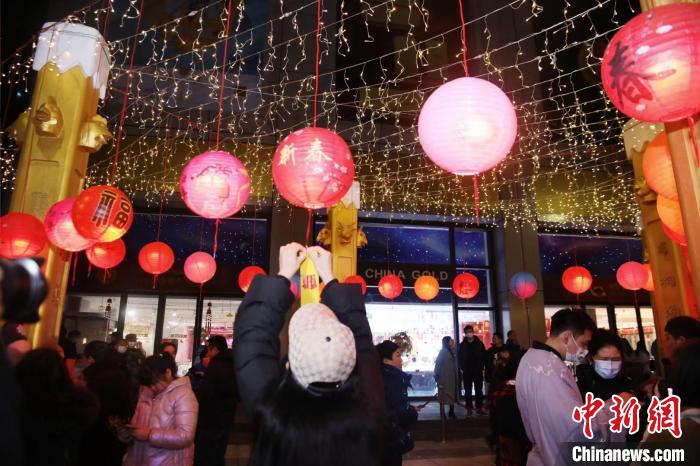 This year, when Valentine's Day meets the Lantern Festival, Changsha's "Golden Street of China" continues the unique charm of Chinese culture in romance, and the special marriage registration point is full of reservations.

This "China Golden Street", which has been open for two months and is only 500 meters long, gathers more than 40 major gold and jewelry brands and many specialty catering and entertainment stores, becoming another check-in place for "Internet celebrity Changsha". It is expected that the annual turnover will break through 10 billion.

Wu Liping, director of the Civil Affairs Bureau of Furong District, Changsha City, said that as a golden wharf, the "China Golden Street" has a large flow of people, and the established marriage registration points are very popular among young people.

From a hardware and electrical street to a gold-themed commercial street, it is the goal of Changsha and China Gold Group Co., Ltd. to jointly create.

Li Weidong, executive director and general manager of Zhongjin Jewelry E-Commerce Co., Ltd., said that moving the e-commerce operation center to Changsha is to make full use of the comprehensive advantages of the "City of Internet Celebrities", based on Hunan and radiating the whole country.

Changsha, the capital of Hunan Province, has remained unchanged in its name and site for more than 3,000 years. It is one of the first batch of famous historical and cultural cities.

In recent years, the popularity of "Internet celebrity Changsha" has been rising, and popular models have appeared frequently. As one of the most entertaining and networked cities, a group of old streets and alleys in Changsha not only show the charm of cultural tourism, but also show that they belong to "Internet celebrities". City" temperament personality.

On Jiucaiyuan North Road, a huge bowl of "rice noodles" stands on the street. The "long noodles" on the retro-style gatehouse are particularly eye-catching. The pure red bricks of the Internet celebrity wall "Changsha" meet the industrial-style words, attracting waves Tourists take pictures and punch cards.

This is the "Hunan Rice Noodle Street", a popular consumer street in Changsha.

There used to be only slightly dilapidated buildings on both sides of the street.

Li Fafang, the owner of Yide Yifan Store, said that the unique and novel style and culture have made this place a new landmark for people to play.

As a genuine "food capital", from a bowl of rice noodles in the early morning, to delicious snacks such as stinky tofu, sugar and oil cakes all over the street, to spicy crayfish... Internet celebrity Changsha never treats tourists' taste buds badly, but also makes delicious food The gathering Taiping Street, Pozi Street, Confucian Temple Ping, etc., have always maintained their popularity on the Internet.

The thousand-year-old ancient city, coupled with the inheritance and innovation of Hunan and Hunan culture, make Changsha infinitely charming.

Many scholars who are engaged in urban culture research believe that, whether it is the creation of offline celebrity attractions or online video and text display, these cultural attractions, with their wide appeal and dissemination, keep Changsha always on the Internet. heat.

In the contemporary era of "washing face and rubbing powder" in urban reconstruction and construction, why can the streets and lanes of the ancient city of Changsha maintain their uniqueness?

Changsha draws on and studies the new concept of "organic renewal" by Chinese architect Wu Liangyong, and develops and refines it into policies and actions, so that the renovation area is consistent with the city as a whole and the historical heritage environment.

In 2018, Changsha officially launched the "organic renewal" of the old city, and formulated the guiding principles: to inherit the history and restore the old as the old, handle the relationship between "demolition, modification and retention", inherit history and culture, strengthen livable functions, Show the vitality of the city.

There is a lion dance performance on the main street of Changsha Old Street.

"For the historical buildings that need to be repaired, the bricks and tiles that are removed are numbered, and the original parts are used as much as possible, and the same old materials are selected for replacement to create a long and ancient charm." Long Xin, deputy director of Changsha Dingwangtai Sub-district Office, said, The renovation of Duzheng Street and Baiguoyuan is based on not destroying the street system and architectural style, so that the profound historical heritage can be preserved.

The old residents, old buildings, old styles, and old feelings have been preserved one by one, and the traffic microcirculation has been opened up in a large area. Internet celebrity homestays, Wenqing bookstores, petty bourgeoisie cafes, etc. are dotted in the ancient streets and alleys.

The old streets and alleys are deeply rooted in the "blood" of history and the "genes" of culture, integrating fashion, art and commerce, making the road of "Internet celebrity Changsha" wider and wider.