In early 1994, four years after the end of the Cold War and the dissolution of the Soviet Union, former US National Security Adviser Zbigniew Brzezinski described a strong and stable Ukraine as a critical counterweight to Russia. 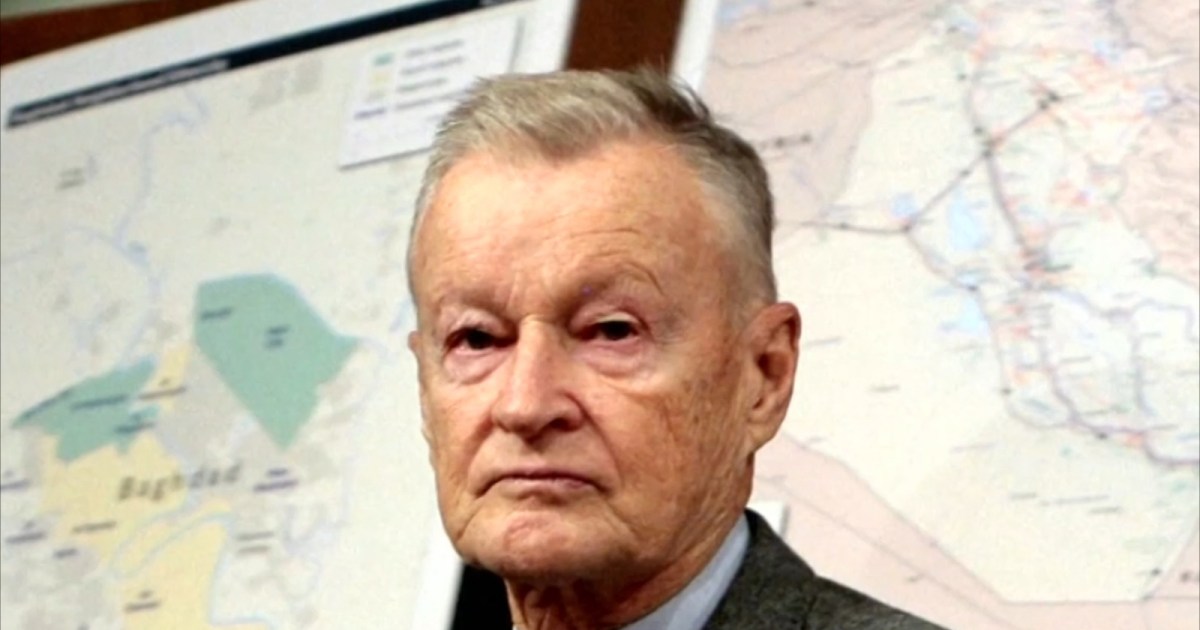 Today, Russian President Vladimir Putin realizes that Ukraine is a knife in the hands of the West and the United States to contain Russia and its grand ambitions.

During his tenure as an important US official, Brzezinski's record was littered with many accomplishments and few failures.

He personally oversaw the SALT II nuclear arms reduction treaty negotiations with the Soviet Union, and made extraordinary efforts to normalize Sino-US relations.

Since Ukraine is not a member of NATO, Washington and allied countries are not obligated to defend it.

As such, the extent to which the United States and its Western allies might go to protect Ukraine is uncertain in nature, far from pledging unprecedented sanctions and supplying Kiev with some military hardware.

A few years ago, I met him, and he is no longer only a former high-ranking US official, but has become a strategic thinker of a unique type, as he worked as a consultant at the Center for Strategic and International Studies in Washington, and a professor of US foreign policy at the prestigious John Hopkins University, and he holds a doctorate from Harvard University in 1953.

During his years as an important US official, Brzezinski's record was filled with many accomplishments and few failures.

He personally supervised the details of the negotiations of the nuclear arms reduction treaty with the Soviet Union known as "SALT II", and made extraordinary efforts to normalize Sino-US relations, but his most important imprint remained in the field of Middle East policies.

Brzezinski was one of the most important architects of Washington's alliance with the Afghan mujahideen in order to push the Soviet Union to withdraw from Afghanistan.

He also planned to deliver Egyptian, Saudi and Pakistani weapons, in addition to Arab fighters, into Afghanistan in order to defeat and humiliate the Soviet army. He has a famous photo with the Mujahideen leaders, whom he described as freedom fighters from a Soviet tank.

So it was not surprising that he received a great deal of blame when the attacks of September 11, 2001 in the United States took place in the hands of groups that Brzezinski personally helped sponsor, finance and arm one day.

After the end of the Cold War, Brzezinski warned of Russia’s humiliation. Hence, it was not surprising that a Russian diplomat working in his country’s embassy in Washington told him one day that “the real dilemma in our relationship with the United States revolves around their belief that the Cold War ended with their victory and defeat, and therefore they adopt the behavior of the victor and expect We have defeated behavior."

The diplomat added, "We see that the Cold War ended without shooting, and without a victor or a loser."

Russia complains about the development of military relations between NATO and Ukraine, at a time when Russian President Vladimir Putin warned NATO that the deployment of weapons or soldiers in Ukraine means crossing the "red line" for his country, considering that any thought of including Ukraine in the alliance will lead to a strong and unprecedented response. .

The North Atlantic Treaty Organization (NATO) was founded in 1949 from 12 countries, then 4 countries joined, and the number became 16 when the Cold War era ended in the early 1990s.

The United States and Western countries respected previous pledges not to include any of the former members of the Warsaw Pact or the former Soviet republics of the alliance, but this changed over time.

And a number of former Soviet republics joined the alliance, until the number of its member states reached 30, and the official borders of the alliance reached the Russian borders bordering Estonia, Latvia, Lithuania and Poland.

It is common in Washington to blame Russian President Vladimir Putin for the Ukraine crisis.

Although experts and commentators believe that Putin deserves no sympathy for his policies, both domestic and foreign, the Ukraine crisis is not only due to Putin's positions.

On the other hand, NATO enlargement measures contradict the pledges the Soviet Union obtained from Washington and the rest of the Western capitals in the German reunification talks in 1990. During a meeting between then US Secretary of State James Baker and Soviet leader Mikhail Gorbachev on the future of European security, Baker famously said: Not an inch to the east," in an explicit confirmation that Washington does not intend to expand NATO to the east.

Hence, Professor Stephen Walt, professor of international relations at Harvard University, points out that this crisis could have been entirely avoided if the United States and its European allies had not succumbed to arrogance, wishful thinking, and liberal idealism, relying instead on basic visions of realism.

Indeed, Russia probably would not have seized Crimea, and Ukraine would be much safer today, had Washington pursued different policies in the post-Cold War era.

Walt noted that if US policymakers had thought about their country's history and geographic sensitivities, they would have understood what NATO expansion looked like to their Russian counterparts.

With Joe Biden in office, one of the axes of Russia's foreign policy has become a more stable and predictable relationship with Russia.

After more than a year in office, and after meeting face to face in Geneva last summer, and making many phone calls between them, the President of Russia, Vladimir Putin, succeeded in thwarting Washington's efforts to bring about a dramatic shift in relations with Russia, and restore the predictability and stability of relations between it and Russia. Russia.

Instead of calming relations with Russia in order to branch out to confront the escalating Chinese challenges, Washington does not know how Moscow will act, nor how it can be confronted on the Ukrainian arena.