This female "net celebrity" doesn't bring goods, she only talks about female celebrities

Chinanews.com Zhengzhou, February 10th telegram: This female "net celebrity" does not bring goods, only female celebrities   China News Network reporter Han Zhangyun   In Zhengzhou, Henan, there is a very special female "net celebrity" who is well-known in the folklore circle. She broadcasts online live broadcasts almost every night, but she never brings any goods. She only talks about female 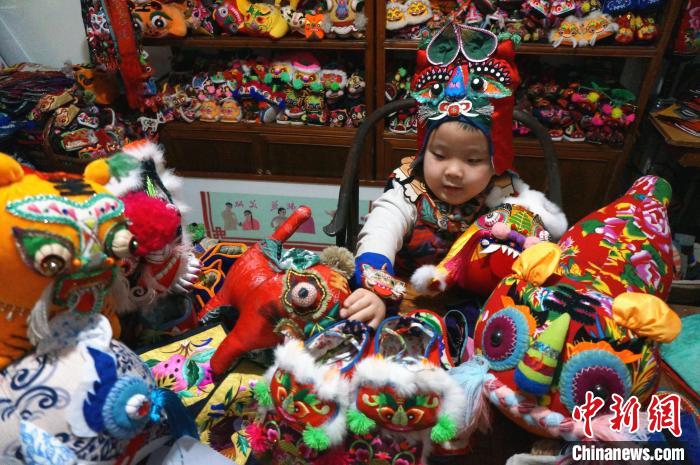 In Zhengzhou, Henan, there is a very special female "net celebrity" who is well-known in the folklore circle. She broadcasts online live broadcasts almost every night, but she never brings any goods. She only talks about female celebrity culture in the live broadcast room.

Recently, the reporter walked into the live broadcast room of the female anchor Li Qian with questions.

Li Qian is an educator in Zhengzhou City and a lover of traditional women's red collections. For 19 years, she has collected nearly 10,000 pieces of tiger hats, cloth tigers, embroidered insoles, clothing, etc. from all over the country, and entered her collection. The room is like walking into a "Women's Red Museum".

Li Qian is well-known in the Zhengzhou folklore circle, not only exhibiting at home and abroad, but also spreading female celebrity culture everywhere.

Before the outbreak of the new crown pneumonia epidemic, Li Qian's collections had also gone abroad to be exhibited in the United States, Canada and other places.

In addition to offline exhibitions, Li Qian will also extend the footsteps of inheriting female celebrity culture to online.

During the 7-day Spring Festival holiday that just passed, Li Qian appeared in the live broadcast room on time every night.

Unlike other Internet celebrity anchors who are keen to bring goods, she never brings goods. The content of the live broadcast is to introduce the culture behind traditional female celebrities to netizens.

In the Year of the Tiger of Renyin, the tiger is the protagonist, and Li Qian's live broadcast room is filled with her carefully selected collection of tiger elements.

"Since ancient times, Chinese people have been fond of tiger elements, such as the tiger in the Chinese zodiac, the white tiger in the Chinese gods of the four directions, and the tiger talisman used to dispatch troops in ancient times. The tiger symbolizes strength, health, and authority, and brings together many beautiful people. Elements..." Holding a pair of tiger-toed shoes in both hands, Li Qian spoke in front of the camera, and in front of her, bibs, cloud shoulders, embroidered shoes, insoles, etc., with traces of time, covered the tabletop.

On the screen, netizens kept swiping and interacting. Some people praised the beauty of the collection, and some people asked about the purchase channel...

Since her first test of online live broadcast on December 11, 2021, she has appeared in the live broadcast room almost every night, and has accumulated 27,000 fans so far.

However, Li Qian's collections are never sold. In her opinion, it is a medium for cultural and artistic exchanges rather than commodities. In the future, she plans to create a larger platform to display her collections, so that more people can see the beauty of Chinese female celebrities.

19 years of collection of female red collections are numerous

Li Qian's love for traditional female celebrities stems from the skillful hands of her mother when she was a child.

"When I was a child, my mother would always embroider on clothes and shoes. Every time I wore it out, my neighbor's children would envy it." Li Qian recalled that her mother's stitches made her feel the beauty and warmth of traditional female celebrities, and she also felt in her heart. Sow the seeds of love for traditional female red.

After working and having a source of income, Li Qian began to collect works of female celebrities.

After 19 years of accumulation, in her collection room, there are countless women's red collections on the wall, on the floor, and in boxes. There are thousands of pairs of tiger-head shoes all over the country alone.

The picture shows the children walking into Li Qian's Tibetan room to feel the charm of traditional culture up close.

"If you have pictures, you must have intentions, and if you have intentions, you must be lucky." Li Qian said that traditional Chinese female celebrity is a warm art, which contains the virtues of making the best use of everything and being diligent and thrifty. Over the years, she has been committed to making more people see it. To the beauty of traditional women's red, rather than their own.

Since 2007, Li Qian has taken her collection of women's reds into more than 150 kindergartens of universities, middle and primary schools, and the four large trolley cases that accompanied her into the campus are like a "moving women's red museum".

"Every time I go to school, I will design themes, such as focusing on festivals, solar terms, etc. Children can touch and wear these things as much as they want. I hope that through this method, more children will fall in love with traditional Chinese culture from childhood." Li Qian said. , "Every time I see the curious and happy expressions of children wearing tiger hats and holding cloth tigers, I love them."

Li Qian brought the collection to the campus for students to experience the beauty of traditional female celebrities.

Li Qian's collections are full of precious collections that have been around for a long time, and each exhibition is unavoidable loss, but she believes that this is not important, "The purpose of my collection is to inherit the culture of Chinese women's red, and only by touching can I gain experience, and this will make More people love our traditional female celebrities." (End)