“Magdi Yaqoub’s Fabricated Call” .. Sherif Adel: Are you targeting us? And Nouran: I am not an expert in voices

The presenter of the "Life is Better" program, broadcast on Al-Hadath channel today, Sherif Adel, commented on the fake call of the international surgeon Magdi Yacoub in his program. Bock," saying: "Dr 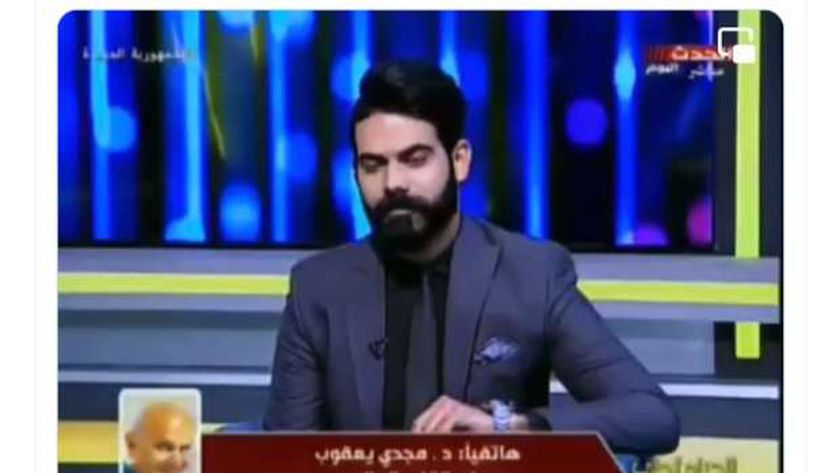 “Magdi Yaqoub’s Fabricated Call” .. Sherif Adel: Are you targeting us? And Nouran: I am not an expert in voices

The presenter of the "Life is Better" program, broadcast on Al-Hadath channel today, Sherif Adel, commented on the fake call of the international surgeon Magdi Yacoub in his program.

According to Al-Watan newspaper, Adel added, during a video clip "Live Broadcast" on his official page on the social networking site "Facebook", saying: "Dr. Muhammad Jamal is the unknown soldier behind all the phone calls to host Dr. Magdi Yacoub during his episodes of the program."

And he continued: “Dr. Muhammad Jamal puts a medal for me on my chest with any ring on his feet, and he is determined that he enters Dr. Magdi Yaqoub with me on the phone so that it can be added to my biography, even if he is stingy with Dr. Magdy’s number and makes sure that we talk from his phone and not Dr. Magdy’s phone. Yacoub".

He indicated that he had known Dr. Muhammad Jamal for two years, pointing out that “he insists on him interfering with Dr. Magdi Yaqoub even at the time of the death of his brother and uncle,” adding: “He says, Magdy Yaqoub will enter you with you and I will let you speak to him, and I say you have the right to keep his number and always be the first, And the owner of the credit is Ali.. you are upset with me, and your alternative is your right in front of people.”

"The presenter of the suspended "Life is Better" program stressed that every media person who starts on his way needs this support, conversation and forming relationships with these names, saying: We are happy to support such a thing, and it should be noted, because all our goal is only good, and thank you to all the people who support us.

He explained that the program was subjected to a fraud and fraud in a professional manner, explaining that the story began about a year and a half ago, during the presentation of another program on the Health and Beauty channel, where Sharif launched the “Haq Al Ghalaba” initiative to connect the needy with aid owners.

During one of the episodes of the old Sharif Adel program, a person called Muhammad Jamal contacted him, through a telephone intervention, and identified himself as one of the assistants of Dr. Magdi Yacoub in his Heart Foundation: “We said, I am with you in whatever need you want, and he offered his services to us,” adding that after a number of From the episodes, they were offered to enter the Sir in an intervention with them as a supporter of the initiative: “All of this is recorded, and we made an official report on it in the October 3 section.”

Sherif Adel communicated with the impersonator of Dr. Magdi Yaqoub more than once through Muhammad Jamal, who deceived him that whoever spoke to him was “walking” himself, according to the arrested journalist: “No one doubts for a moment that he is another person,” adding that when he asked him for the number The personal world surgeon refused it.

After the case of the major attack on the program due to the fake call of Dr. Magdi Yaqoub, Sherif Adel asked Muhammad Jamal to send an official email to the channel stating that the caller was actually walking, and he replied that he would do so, and he would come out via a live broadcast explaining the truth of it himself, but he evaded it after That and disappeared: «My work blocks».

For her part, the media, Nouran Mahmoud, revealed the scenes of the fabricated call to Dr. Magdi Yaqoub, confirming in her first appearance via a live broadcast on the “Al-Watan” page, after Magdi Yaqoub’s fabricated call, that she and the program team do not have the personal number of the famous heart surgeon, but there is a person named Muhammad Jamal, convinced them that he was Magdi Yacoub's assistant, and had a previous relationship with broadcaster Sherif Adel, and convinced him that he would make the great surgeon participate with him in a telephone interview in the first episodes of the program.

Nouran Mahmoud responded to the public’s accusation that she was aware of the incorrectness of the call, saying, “I don’t know the true voice of Magdi Yacoub .. I am not an expert in voices,” pointing out that Dr. Magdi Yacoub personally did not take any legal action against them, or they were referred for investigation, but rather They were prevented from appearing on the channel and the program was suspended, continuing: "I woke up to find myself a trend."