China News Service, Xining, January 27 (Reporter Hu Guilong) At 14:00 on January 26, the "Modern Chinese Dictionary" (Chinese-Tibetan Vocabulary Version) (hereinafter referred to as: Dictionary) publication and distribution forum was held on the 5th floor of the front building of the Qinghai Provincial Party Committee. meeting room. The issuance of the "Dictionary" will help the ethnic minoritie 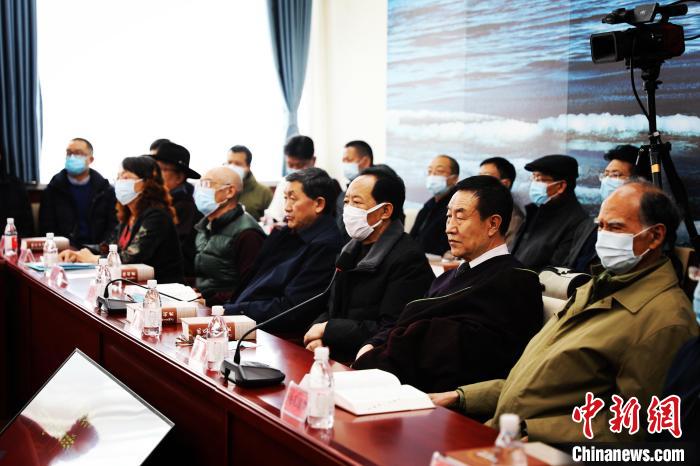 The issuance of the "Dictionary" will help the ethnic minorities in Tibet-related areas improve their learning ability, unblock information channels, expand the scope of communication, enhance labor skills and employability, and open a new chapter in the compilation of bilingual dictionaries in my country.

The compilation work of "Dictionary" started in June 2013. Based on the seventh edition of "Modern Chinese Dictionary", 70,132 Chinese entries were included and translated.

The picture shows the representatives of experts and scholars who participated in the symposium on the publication and distribution of "Modern Chinese Dictionary" (Chinese-Tibetan Vocabulary Version).

At the symposium, Wang Zhizhong, Deputy Secretary-General of the Qinghai Provincial Government, read out the congratulatory letter from the National Ethnic Affairs Commission. The congratulatory letter pointed out that, as an authoritative reference book for cadres and masses in ethnic areas to learn and use the national common language, the publication and distribution of "Dictionary" will help promote the popularization of the country in ethnic areas. The common language is of great significance.

It is hoped that the Qinghai Provincial Ethnic and Religious Affairs Committee can conscientiously summarize the work experience of dictionary compilation, continue to carry forward the achievements, and make new and greater contributions to promoting exchanges and integration of various ethnic groups and forging a sense of community of the Chinese nation.

Danzhu Angben, deputy director of the National People's Congress Ethnic Affairs Commission, said in a video speech that the publication of the "Dictionary" will help protect the rights of ethnic minorities to learn and use their own languages.

The "Dictionary" has the characteristics of typicality, basicity, longevity and practicality, and is a basic project to build a spiritual home for all ethnic groups.

"Being able to have a standard, authoritative, and complete modern Tibetan-Chinese dictionary will have invaluable social and cultural value in promoting the healthy and rapid development of economic, social and cultural education in Tibet-related areas." Former Deputy Director of the Dictionary Compilation Research Center, Chinese Academy of Social Sciences, Tan Jingchun, a researcher at the Institute of Linguistics, said that in recent years, the enthusiasm of Tibetans in various places to learn Chinese has been very high, especially the majority of students, migrant workers, self-employed businessmen, ecological immigrants, new urban population, and religious people have shown that they have learned to master Chinese. strong desire.