Russian artist Ivan Volkov has been arrested after placing a huge poop sausage on Marsfältet in central St. Petersburg. Petersburg, reports the newspaper Fontanka. Pictures of the artwork were spread on the internet and the authorities chose to detain him. Volkov now risks up to three years in prison. 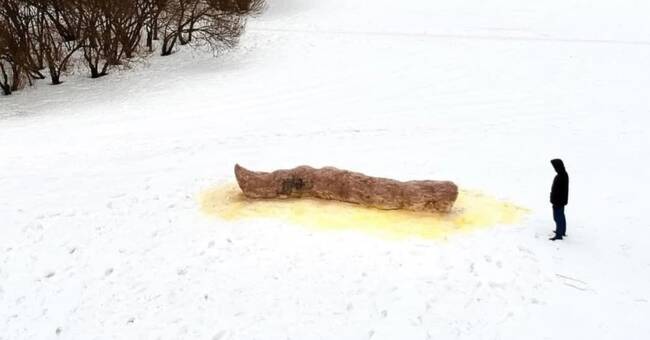 The place where the controversial sausage was placed is a memorial site for the soldiers who fell during the Russian Revolution of 1917. It is one of St.

Petersburg's most popular areas and is adjacent to Peter the Great's summer garden.

According to Volkov, the purpose of the artwork is to draw the attention of dog owners to the habit of not picking up after their pets.

The phenomenon becomes extra clear when the snow begins to melt on the streets, he says.

According to the local authorities, the poop sausage has now been removed.

Ivan Volkov has previously had exhibitions in Berlin and New York and this is not the first time he does poop art.

A similar installation was made in 2021 in the city of Protvino where he grew up, but there the poop sausage did not get as much attention.

- It was so beautiful that I happened upon myself, Volkov wrote on Instagram then, in a post that has now been deleted.

The artist's mother has gone public and assured that her son does not mean anything bad and that he has great respect for the dead, writes Fontanka.

- I am ready to apologize to everyone in St.

Petersburg if my son offended you.

My son is a very intelligent person with a good sense of humor.

Ivan Volkov has been in contact with his mother since he was arrested and has assured that he is well.