The Sharjah Investment and Development Authority (Shurooq) announced its recreational activities and celebrations at Al Qasba, Al Majaz Waterfront, Al Muntazah Gardens and Khorfakkan Beach, as part of the “The Most Beautiful Winter in the World” campaign, which takes place during weekends and extends until February 26, 2022. 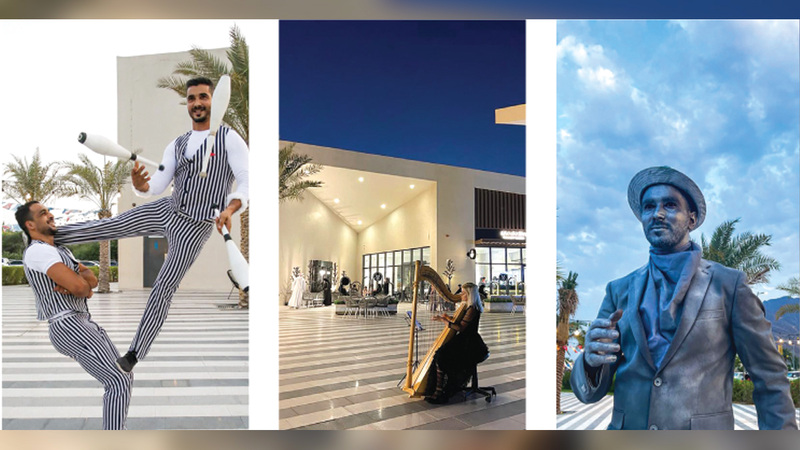 Festive and entertaining performances within the “The Most Beautiful Winter in the World” campaign.

The Sharjah Investment and Development Authority (Shurooq) announced its entertainment activities and celebrations at Al Qasba, Al Majaz Waterfront, Al Muntazah Gardens and Khorfakkan Beach, as part of the “The Most Beautiful Winter in the World” campaign, which will take place during weekends and extend until February 26, 2022.

The event comes in line with its mission and vision to enhance Sharjah's position as a global destination for family tourism and ecotourism, through a wide range of shows and entertainment for families, children and visitors of all ages.

Shurooq’s destinations receive its visitors with many festive and entertaining performances, such as a saxophone player, giant multi-form puppets, and performances by wandering artists, in addition to bands playing music and drums that showcase a number of international arts and cultures, and a circus procession that roams between the squares, in which the jugglers are paraded. And acrobats have their skills, and visitors will have fun filled with excitement, to the tunes of the guitarist, and the performances of the wandering magician.

And for fans of international personalities who have drawn a smile on the faces of the world with their movements and performances, such as Charlie Chaplin, Al Majaz Waterfront presents performances by artists who impersonate these characters, with a wide range of events and musical and entertainment segments, which start at 4:30 pm during Friday and Saturday, until the hour 9:45 pm.

In the park gardens, recreational activities are distributed over the evening hours, starting from 5:00 until 9:45 pm, to provide Sharjah residents and visitors with a mixture of folklore shows that highlight the cultures of peoples, with a variety of activities that include all parts of the destination, through artists. Performers, musicians and dance performances, which include neon lights, spread the atmosphere of joy and fun among visitors.

As for Khorfakkan Beach, its visitors receive entertainment and artistic activities during the weekends, where acrobatic performances teams present entertainment shows from 4:30 until 9:45 pm.

In addition to the various artistic musical performances in intermittent periods between 6:00 and 9:45 pm, the Khorfakkan Beach celebrations include many entertainment options targeting young and old.

As part of its celebrations of the “The Most Beautiful Winter in the World” campaign, “Shorouk” launches its “Spend and Win” promotional offers, offered by seven tourist destinations affiliated with the authority, and includes raffles through which five winners will win prizes and valuable experiences offered by the luxury hospitality destinations in “Shurooq”, which The raffles will be held in the month of March.

The "spend and win" offers enable visitors with a minimum spend of 50 dirhams to enter the draw.

Creativity in the entertainment industry

About the events and activities organized by the Sharjah Investment and Development Authority “Shurooq” in its tourist destinations as part of the campaign, the Executive Director of Operations at “Shurooq” Ahmed Obaid Al Qaseer said: “Shurooq’s activities stem from its mission based on creativity and innovation in the entertainment industry, which is one of the sectors The main objective of promoting global economic activity, therefore, the authority constantly seeks to raise the level of services provided to visitors coming to its tourist destinations at these times of the year, which are characterized by the beauty of their atmosphere, as the “The Most Beautiful Winter in the World” campaign represents a golden opportunity that allows families and individuals to spend the most enjoyable times. Especially during the weekends.”

He added: "Shurooq's activities in the campaign (The Most Beautiful Winter in the World) are characterized by diversity and distribution on its most prominent destinations, through a wide range of activities and reviews, which are very popular among members of society in all its categories.