Muslim traders arrived in Southeast Asia early in the Islamic era, and the earliest evidence of a Muslim population in Indonesia dates back to the 13th century in North Sumatra. 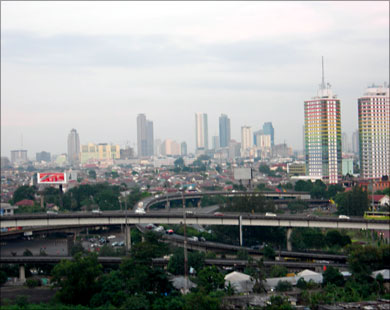 The Indonesian parliament on Tuesday (January 18, 2022) approved a bill to move the country's capital from Jakarta to East Kalimantan on the island of Borneo.

The new capital will be called "Nusantara", the Javanese name for the Indonesian archipelago chosen by President Joko Widodo, with an area of ​​more than 256,000 hectares (equivalent to more than 632,000 acres) according to the new law.

New legislation gives the 489 trillion rupiah ($34 billion) project the legal basis to move forward with implementation ahead of the 2024 presidential election.

Jakarta is one of the world's most densely populated cities, and the city is constantly exposed to flooding, which causes it to gradually sink under water due to heavy rainfall and the use of groundwater by millions of people.

On 17 August 1945, Jakarta became the official capital of the Republic of Indonesia after the country declared its independence from the Dutch Empire.

Location: Southeast Asia and comprising 17,508 islands. The country shares land borders with Papua New Guinea, East Timor, and Malaysia. Other nearby countries include Singapore, the Philippines, Australia, and the Indian territories of Andaman and Nicobar Islands.

The largest Muslim-majority country in the world.

The island of Java (the current capital of the country is Jakarta), which is home to more than half of the country's population, is the largest inhabited island in the world.

Area: one million and 904 thousand and 569 square kilometers.

Political system: republican, with an elected president and legislature.

Language: Bahasa (official) is a language developed from Malay, in addition to English, Dutch, and hundreds of local dialects.

The Indonesian archipelago .. the origin of the name

The name Indonesia is derived from the Latin word Indus, meaning India, and the Greek word Nisos, meaning island.

The name dates back to the 18th century, before the formation of the Republic of Indonesia.

- In 1850, the English etymologist George Earl suggested launching the terms Indonesians and Malayansians for the inhabitants of the Indian and Malay archipelagos.

Al-Masudi called it - in his book “Morouj Al-Zahab” - the land of the Maharaj, and it was known to Muslim writers by the names of its islands: Java, Sumatra and the Malay Peninsula, and some Muslims call Sumatra the Greater Java and Java the Lesser Java.

Muslim traders arrived in Southeast Asia early in the Islamic era, and the earliest evidence of a Muslim population in Indonesia dates back to the 13th century in North Sumatra.

Islam spread to other Indonesian regions gradually, and was the dominant religion in Java and Sumatra by the end of the 16th century.

- The largest proportion of those entering Islam had mixed customs influenced by culture and religion, and these customs and traditions formed the dominant model of Islam in Indonesia, especially in Java.

1512: The first arrival of Europeans to Indonesia was when Portuguese merchant ships led by Francisco Serao arrived and sought to monopolize the sources of nutmeg, cloves and kebabs in the Moluccas.

1602: Conflict between Dutch and British merchants begins when the Dutch establish the Dutch East India Company (VOC) and become the dominant European power.

Dutch control during most of the colonial period was limited to coastal areas, while influence was weak within the islands, but in the early 20th century Dutch hegemony extended to include the borders of present-day Indonesia. previously suppressed.

August 1945: Two days after Japan's surrender, national leader Sukarno declares independence and is appointed president, but the Netherlands tries to regain control and is met with armed struggle and diplomatic efforts.

December 1949: The Netherlands officially recognized Indonesia's independence after facing international pressure, with the exception of some lands that continued to be Dutch-controlled in western New Guinea, which were returned to Indonesia after the New York Agreement in 1962, and the Freedom of Choice Act mandated by the United Nations in 1969.

Sukarno moved from democracy to authoritarianism and maintained his power base by balancing the opposition forces represented by the military and the Indonesian Communist Party (PKI).

September 30, 1965: The military thwarted a coup attempt, after which Sukarno led a violent purge against the communists by blaming the Communist Party of Indonesia for the coup attempt, which led to the elimination of the party and the killing of thousands.

March 1968: General Suharto appoints the army chief as president officially and the US government endorses the new regime. An authoritarian, he was widely accused of corruption and suppressing political dissent.

Indonesia was the country hardest hit by the 1997 Asian financial crisis, and growing popular discontent with the new regime led to popular protests across the country.

1999: East Timorese voted to secede from Indonesia after 25 years of military rule and international condemnation of the oppression of the East Timorese.

2005: Achieving a political settlement to the armed conflict in the separatist province of Aceh.

Indonesia is administratively made up of 33 provinces, 5 of which have a special status, and each province has its own legislature and governor.

2001: Following the implementation of regional autonomy measures, major provinces and cities became administrative units, and are responsible for providing most government services.

The Indonesian archipelago is the most earthquake-prone region in the world.

Being located within the Pacific Ring of Fire, it is a seismically and volcanically active ring.

Indonesia is a founding member of ASEAN and a member of the Group of Twenty major economies.

Jakarta is the current capital of Indonesia, located west of the island of Java, and is the most important city in the country.

It was called Batavia when Indonesia was a Dutch colony.

Jakarta is located on the northwest coast of the island of Java in Indonesia, on the Gulf of Jakarta, where the Selong River flows into the Java Sea.

Jakarta has a hot and humid climate due to its proximity to the equator. It experiences a dry season from July to September, and torrential tropical rain falls on it throughout the year.

Most of the lands on which urbanization extends are only a few meters above sea level, as the city was built on former swampy land.

The city of Jakarta has the status of a special province and territory, and is divided into 5 regions, with an area of ​​650 square kilometers.

People in Jakarta speak the city dialect, which is one of the dialects of the language in Indonesia, although the official language is Bahasa Indonesian.

The place on which Jakarta was inhabited in prehistoric times, and historical evidence indicates the existence of an Indo-Java kingdom in the fourth century AD.

In the 11th century AD, the place became a port called Sunda Kalba.

- 1509: Portuguese merchant fleets visited this area and the Portuguese tried to establish a commercial headquarters in Sunda Kalba in 1522, but the neighboring Muslim state of Bataan seized the area and renamed it.

- The city was a Dutch settlement established by the Dutch around the port, which is located at the mouth of the Selong River in the year 1600. They called it the city of Batavia.

The city includes Merdeka Square, surrounded by government buildings, including the Presidential Palace, which was the seat of the ruler during Dutch colonialism, the palace in which sovereignty was transferred from the Netherlands to Indonesia when the Dutch flag was lowered and the Indonesian flag was raised on the palace.

Jakarta is the main economic center of the country, and the headquarters of major government and private companies are located in it.

It includes many ports that receive foreign ships, and has an extensive network of roads and railways.

The city of Jakarta has many prominent historical monuments, including Merdeka Square, which includes the most famous landmarks of the city, among them the National Monument, a marble obelisk with a height of 137 meters, with a torch covered with 35 kilograms of gold, and at the base of the obelisk there is the National Struggle Museum. The monument, which represents the independence of Indonesia, was opened in 1945.

The city also includes historical popular markets such as Jalan Surabaya Market, and includes multiple museums such as the National Museum, which was founded by the Dutch in 1778, and is known as "Gedong Jagah", meaning the elephant building.

It also includes famous mosques, including the Istiqlal Mosque, and several public parks such as Gaya Ancol Park.

April 2010: A study by a team of geologists at Bandung Institute of Technology revealed that Jakarta loses its land size annually between 10 and 12 centimeters, as a result of natural or man-made factors.

The study attributed the most important causes of land subsidence in Jakarta and the sinking of the land to the annual floods that result from the amounts of heavy rains, the increase in groundwater extraction processes as a result of the growth of urban projects in recent years, and the rise in sea levels.

The highest rates of land subsidence were recorded in the coastal areas bordering the sea, which are witnessing an increasing growth in projects, although - according to scientists - "they are still fragile lands that do not absorb the huge volume of huge buildings that push parts of the city down."

- The study referred to samples of some buildings and damaged areas in central Jakarta, which it said are subject to continuous decline, and mentioned the Jakarta Theater building in Sarina district, and the building of the Election Supervision Authority, which are large and well-known buildings, in addition to a number of other buildings.