Female doctor in ICU: willing to be a little light in the dark night 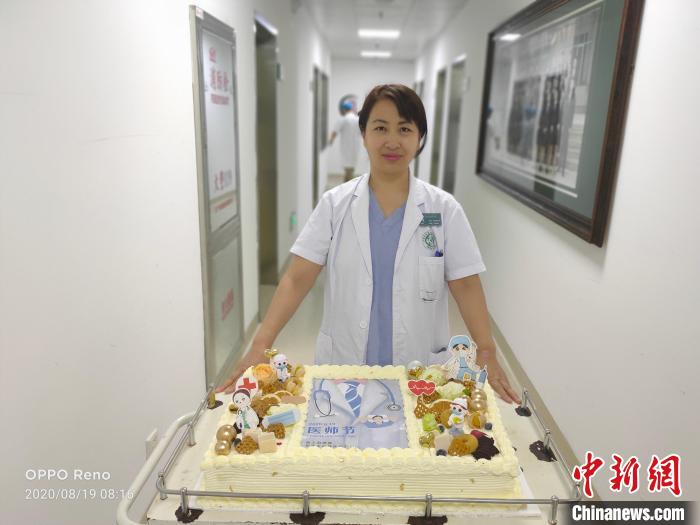 (New Year's Day walks to the grassroots) Female doctor in the ICU: willing to be a little light in the dark night

China News Service, Hohhot, January 18th: Female doctor in the ICU: willing to be a little light in the dark night

In two days, Yu Haixia will once again end the isolation and rest period.

Since the outbreak of the new crown epidemic two years ago, this is the fourth time she has been on the front line and the longest time.

As an ordinary intensive care physician, she races at the same time and competes with death. Yu Haixia said that she does not want to be a "superhero", but only wants to be a little light in the dark night to illuminate the lives of patients.

The worst days are over

At the beginning of 2020, the new crown pneumonia epidemic broke out in Wuhan and spread across the country. Yu Haixia, chief physician of the Department of Critical Care Medicine of the People's Hospital of Inner Mongolia Autonomous Region, asked for help in Hubei.

As the first medical team from Inner Mongolia to help Hubei, Yu Haixia participated in the 53-day anti-epidemic battle.

"That's when I was most afraid."

"In the early days of the epidemic, everyone was very unfamiliar with the new coronavirus, and they could only figure it out during the treatment process. In addition, there were continuous deaths and medical staff infections at that time, so the psychological pressure was very great." recalled During the days of supporting Jingmen, Hubei, Yu Haixia still had tears in her eyes.

Yu Haixia said that the most frightening days are over, and now they can be very effective in terms of treatment, materials, sensory control, and social control.

"More importantly, every time we walk into the ward and look at the eyes of patients who are eager to be cured, we forget the word 'fear' to the outside world." Today's Yu Haixia talks about facing the epidemic with a much more relaxed tone.

A "soup" trip with my mother

The intensive care unit is known as ICU, which is one of the disciplines in the medical field that face death and create miracles of life.

ICU is also one of the main force in the medical treatment team of new coronary pneumonia.

Yu Haixia's support for Hubei's rescue work has allowed her to accumulate a lot of valuable clinical experience.

In November 2020, the local epidemic broke out again in Manzhouli. Yu Haixia, who had finally taken annual leave, was ordered to take a "flying" flight from Guilin to Manzhouli. She put on protective clothing and went to the front line.

As everyone knows, at that time, Yu Haixia was preparing to start an annual trip with her young mother.

Yu Haixia told reporters that due to the particularity of her work, she was busy taking up most of her time and had little company with her mother.

"So, I have an agreement with myself: I must take my mother to travel every year."

During the annual vacation in 2020, Yu Haixia and her mother joined from Hohhot and Chongqing to Guilin respectively. The trip was about to start after breakfast. At this time, a phone call to support the frontline in Manchuria changed the mother and daughter's itinerary.

"The situation at that time was urgent. I immediately bought a ticket for my mother to return to Chongqing, and booked myself the earliest flight to Hailar that day." Yu Haixia took her mother to the high-speed rail station and hurried to the airport.

"Although my mother understands and supports me very much, I still feel guilty watching her leaving."

Yu Haixia said that in 2021, she has no time to take annual leave, and has not taken her mother to travel for two consecutive years.

"You can only try to make up for it later."

In mid-October 2021, the new crown epidemic broke out in Ejina Banner. This is the first time that Inner Mongolia has faced such a large-scale epidemic since the fight against the epidemic in 2020.

"First of all, I am an intensive care physician, and secondly, I have experience in the medical treatment of new coronary pneumonia, so when I received the notice, I was very sure that I must go." After simply going home and packing, Yu Haixia led the team to fight against the new crown again. The "battlefield" of the epidemic.

"This 'battle' is too tiring, but fortunately we persevered." There are many elderly patients, severe patients, and underlying diseases... Whether this "battle" can be won depends on the critically ill patients treatment can be successful.

"Although there is a 4-hour shift, it is too difficult for the members of the critical care team." Yu Haixia recalled that one day, a patient became seriously ill and needed tracheal intubation. She returned to the room immediately. Hospital, emergency warehouse.

After fighting all night for rescue, the patient's condition was finally stabilized.

On the way back to the room, Yu Haixia received an emergency call again, and another patient's condition deteriorated sharply, so she returned to the hospital halfway to continue rescuing the patient...

"My team members and I are like this. We are often called back on the way to 'off work'. We are used to it, and everyone will not complain because we know that the patient can't wait." Yu Haixia remembers that it was night when she returned to her room on her birthday. At 11 o'clock, she silently made a birthday wish: "May my patients be safe!"

A patient with endotracheal intubation made Yu Haixia particularly worried. His treatment process was like riding a roller coaster, which was very unstable.

Yu Haixia hardly left the ward for a while.

The hard work paid off, and a miracle happened. The patient's vital signs gradually improved. On the day of the successful extubation, the patient trembled and wrote the words "Yu Angel" on Yu Haixia's protective suit. .

"I was very moved at that time, this is the starlight we met in the 'war'." Looking back now, Yu Haixia's eyes will smile into a "crescent moon".

On November 27, 2021, a new round of local epidemic broke out again in Manzhouli.

The two critically ill wards led by Yu Haixia are the first wards to be cleared in Hailar's designated hospital. "There is no better New Year's gift than this."

In the past three months and two anti-epidemic battles, all 73 new crown patients treated by Yu Haixia were cured and discharged, achieving the "three zeros" goals of zero death, zero infection, and zero spillover.

From Hubei to Inner Mongolia, after several fights against the epidemic, Yu Haixia "lit up" one miracle of life after another in the ICU ward.