Afia Siddiqui comes from a prestigious family in Pakistan. Her father is Muhammad Siddiqui, who studied Neurology in Britain, and her mother is a social activist, Ismat Seddiqi. 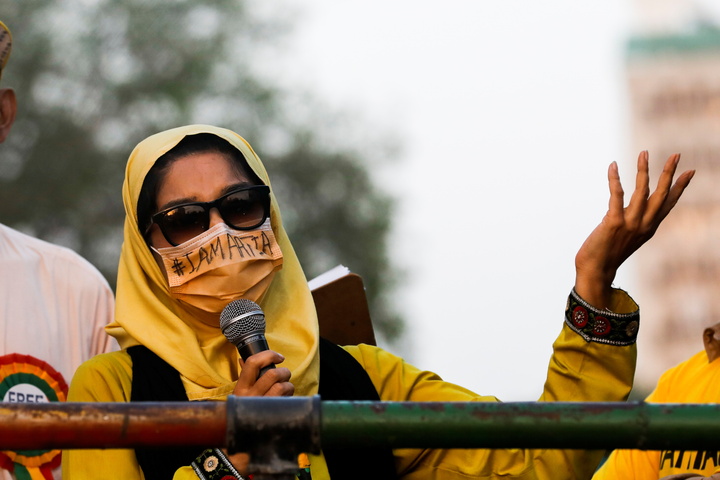 During his visit to Philadelphia, Pennsylvania, on Sunday, January 16, 2022, US President Joe Biden linked the hostage-taking incident inside a synagogue in Colleville, Texas, to a person imprisoned in America for 10 years.

The person Biden referred to was prisoner Aafia Siddiqui, a Pakistani scientist who was sentenced in 2010 to 86 years in prison by a federal court in New York for attempting to shoot American soldiers while she was in custody in Afghanistan.

According to media reports, the kidnapper demanded the release of Afia Siddiqui, a Pakistani doctor with US citizenship, so that her name jumped to the fore again.

Aafia Siddiqui comes from a prestigious family in Pakistan. Her father is Muhammad Siddiqui, who studied Neurology in Britain, and her mother is a social activist, Ismat Seddiqi.

1990: She completed her secondary education at Golestan Shah Latif School.

1992: I joined the Massachusetts Institute of Technology, after 3 semesters at the University of Houston.

1995: She obtained her bachelor's degree and married an anesthesiologist from Karachi, Amjad Khan.

After her marriage to Amjad Khan, Afia continued her studies at Brandeis University.

2001: Received a PhD in Neuroscience.

- During her studies, she was known about the health of her Islamic activity, as she led several campaigns in American cities in order to obtain donations for Afghanistan, Chechnya and Bosnia. She was also awarded many honorary certificates for her contribution to several activities.

2002: Eight months after the events of September 11, 2001, the US Federal Investigations questioned Aafia Siddiqui and her husband, and interrogated them about Amjad Khan's purchase of night vision goggles, military books, body armor and others.

But Amjad Khan confirmed during the investigation that he had bought the equipment for the purpose of hunting.

August 2002: Afia and her husband divorced after they returned to Karachi, her hometown, and their relationship deteriorated.

A few days after the divorce, Afia gave birth to her son, Salman.

After her divorce from Amjad Khan, Afia married another person who lived in Kuwait, but he was born in Baluchistan, Ali Abdul Aziz, known as Ammar Al Balushi, and he is the nephew of Khaled Sheikh Mohammed, who the United States says is the mastermind of the "9/11" attacks.

2002: Aafia Siddiqui traveled to the United States in search of an academic job, but 10 days returned to Pakistan after failing to find a job.

- The United States of America said that Afia Siddiqui returned to America because of her "jihadist activities", as she opened a mailbox in the name of Amjad Khan, whom she considers (a member of "Al-Qaeda"), who was arrested in Pakistan in March 2003 and transferred to Guantanamo Bay. .

March 2003: Khalid Sheikh Mohammed (the uncle of Ammar al-Balushi), who is considered the third man in al-Qaeda and the architect of the September 11, 2001 attacks, was arrested in Karachi.

Khaled Sheikh Mohammed was handed over to the US authorities, who transferred him to Guantanamo Bay, where he was tortured as part of his interrogation, according to a report issued by a US Senate committee on torture methods practiced by the CIA.

After his arrest, Aafia Siddiqui, whom the United States believes is linked to Al-Qaeda, disappeared, as well as her three children - Ahmed, Maryam and Salman, who was no more than 6 months old at the time and died after that - from Karachi.

- Her family said Afia and her three sons were preparing to leave their home in Karachi's posh Gulshan Iqbal neighborhood for the airport when they were arrested by Pakistani and American agents.

Fawzia Seddiqi, her brother, said: "About two hours after Afia left, there was a knock on the door. My mother went to the door and asked about the knocker, who said: If you say anything or tell the police, we will kill the four."

- According to Afia's mother (Esmat), the family searched for Afia and her missing children, but the Pakistani intelligence threatened her if she continued to search and warned her of dire consequences.

Despite this, Ismat kept looking for her daughter from time to time.

2004: The US Federal Bureau of Investigation included her name on the wanted list as a "dangerous figure" working with Al-Qaeda against US interests.

My friend disappeared for about 5 years.

Her family believed that she was being held by US forces in Afghanistan, while the US says that she disappeared from view because she was on the wanted list, claiming that she had been working during her disappearance (5 years) for armed groups, until she traveled to Afghanistan and was arrested there in 2008.

An investigation conducted by a British journalist called "Yvonne Radley" about a female prisoner in Bagram known as "Prisoner No. 650", about which one of the Afghan prisoners of Bagram, Moazzam Beck, wrote a book he called "The Enemy Fighter".

After research and investigation, the journalist concluded that "Prisoner No. 650" in Bagram is a Pakistani doctor named Afia Siddiqui, and at that time, the media began to take an interest in the case.

Despite that, the United States of America continued to deny Afia's detention.

US officials asserted categorically that at no time was Afia in a US prison before 2008.

The Afghan intelligence confirmed that Aafia Siddiqui was in Pakistan during her disappearance, as she was living in the city of Quetta and working with armed groups, before traveling from the Pakistani city of Quetta to the Afghan city of Ghazni in 2008.

The same account was confirmed by Amjad Khan, noting that he had seen Aafia Siddiqui twice during her disappearance in Pakistan.

- July 17, 2008: Afghan police announced that they had arrested a Pakistani woman and an 11-year-old boy, who were preparing to carry out a suicide attack on the provincial governor's headquarters, and they were in possession of maps and important documents on how to use chemicals and explosives and make tribes.

- According to the American version, Aafia Siddiqui jumped from behind a curtain in a cell, before interrogation began, at the officers, took one of them's weapon, and then shot, but she missed the target.

An American officer responded by shooting Afia, who hit her in the chest and fell into a coma.

After her injury, she was transferred to Bagram Air Base, which is located north of the Afghan capital, Kabul, and was treated there for two weeks, before being transferred to the United States for further investigations.

August 2008: The US authorities began the trial of Afia Siddiqui, and her trial lasted about two years.

- The Pakistani parliament demanded the government to ask Washington to return Aafia Siddiqui to the country, and her arrest sparked massive protests in Pakistan amid popular calls for her release.

2010: During her trial in New York, her only public appearance since 2003, Afia said she was detained for a "prolonged period" in a "secret prison" in Afghanistan.

Afia denied shooting at American interrogators during her interrogation in Afghanistan on charges of being linked to Al-Qaeda, and confirmed that she had tried to escape for fear of being transferred to another secret prison.

Afia told the Federal Court of Manhattan that she was afraid that American soldiers were preparing to transfer her to another secret prison, so she tried to sneak out of the interrogation room.

February 2010: She was convicted of all charges, including attempted murder, armed assault on an American officer, and planning to target sensitive places in the United States of America.

The US court sentenced her to 86 years in prison, although Afia's defense team denied the charges against her.

Afia affirmed her innocence of the charges against her, considering that Israel, not the United States, is behind this ruling.

August 2014: ISIS initially demanded a ransom from the company for which the American journalist James Foley works, then returned and demanded health as a price for Foley's life, and when the American response came in refusal, ISIS militants cut off his head.

2020: A group of senior American officers received a request from Pakistani official bodies, stating that Islamabad might free the kidnapped Sergeant Boi Bergdahl if Afia Siddiqui is released, but US President Barack Obama refused any negotiations with the kidnappers.

- Afia's family confirmed that it was not connected to the kidnappings taking place in Syria, which uses Afia's name to get her demands, and pointed out that all these deals or kidnappings would damage Afia's reputation, and the family also affirmed that it believes in peaceful and non-violent struggle.

January 11, 2022: According to "Foreign Policy" magazine, ISIS demanded the release of Afia in exchange for the life of an American woman kidnapped in Syria working with a humanitarian organization.

- January 15, 2022: ABC News quoted a US official that a man is holding hostages in a synagogue in Colleyville, Texas, claiming to be Aafia Siddiqui's brother and demanding her release from prison.