A star cluster is orphaned after expelling its most massive stars

The astronomer Rafael Bachiller reveals to us in this series the most spectacular phenomena of the Cosmos. Topics of exciting research, astronomical adventures and novelties... 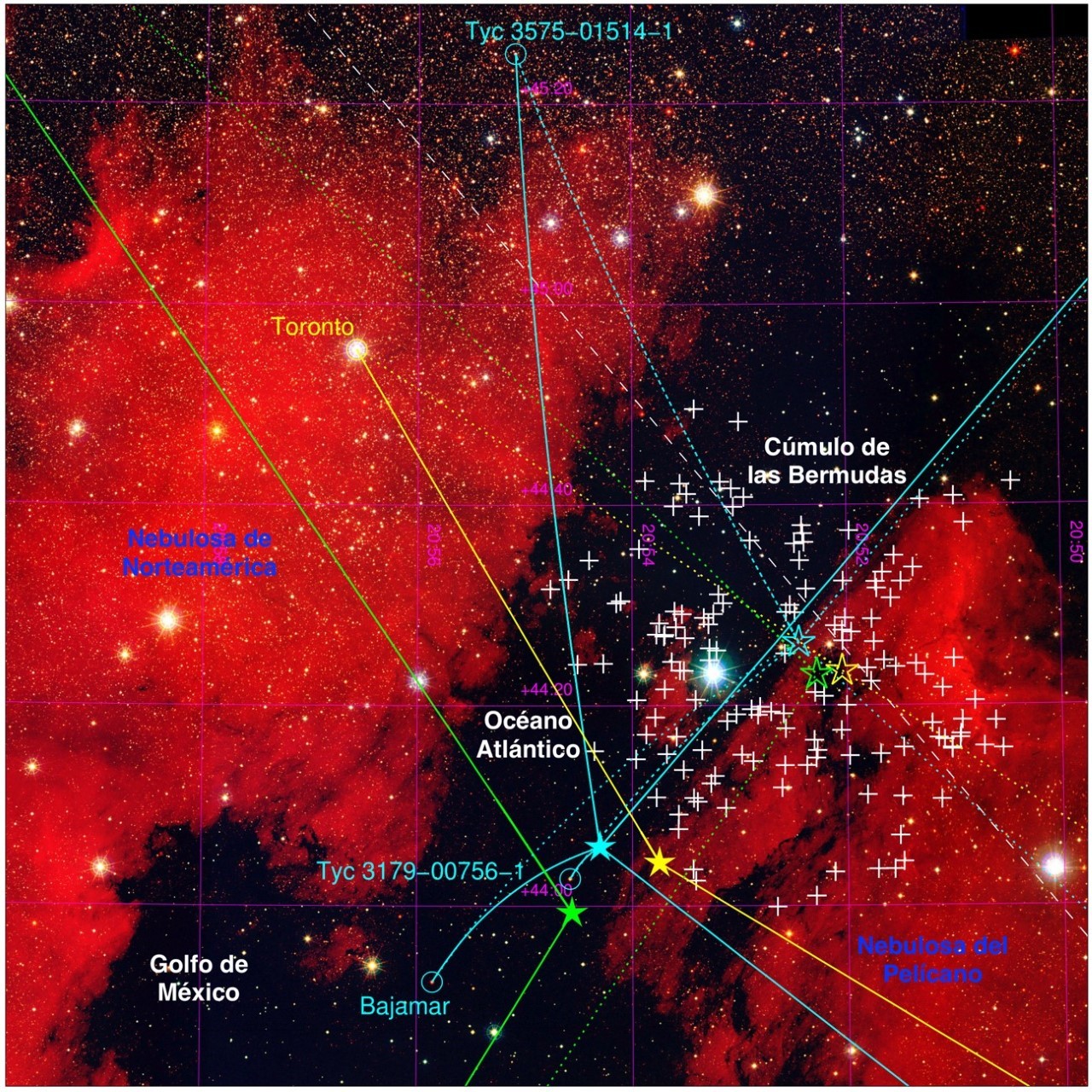 Astronomers from the Center for Astrobiology (INTA-CSIC) have discovered that a young cluster has expelled its recently formed massive stars.

If these phenomena are frequent, space-roaming neutron stars and black holes could be very abundant.

Astronomers are very given to pareidolia, that is, to assigning familiar visual patterns to the random shapes we see in the sky.

For example, the constellations of the zodiac were assigned animal shapes millennia ago.

Similarly, the interstellar nebulae found in our galaxy, with their irregular and capricious shapes, are assimilated to objects, beings or animals.

Good examples are the North America Nebula and the Pelican Nebula.

They look like two large clouds, but they are actually a single bright mass of gas with another dark cloud in front of it in the middle.

Following the nomenclature suggested by geographical pareidolia, we will say that this great dark mass is the cosmic Atlantic Ocean and the cosmic Gulf of Mexico.

Bermuda cluster and some of its runaway starsObs.

Located 2,600 light-years away in the constellation Swan, the North America and Pelican Nebulae are among the closest massive star-forming regions to Earth.

The glowing gas in these clouds consists essentially of hydrogen that is being ionized by ultraviolet radiation from large, young stars in the vicinity.

Among these, the dominant one is a double system, relatively isolated, which has come to be called the 'low tide star' (remember that this is the original name of the Bahamas archipelago, off Florida).

To top off the pareidolia, further north of this star is a large group of young stars known as the 'Bermuda cluster'.

Stars are not usually born isolated. Mostly, the most massive ones form in large groups or clusters from a single interstellar cloud of dusty gas. Such associations can have from a few tens to several million stars. For this reason, it was very surprising that the Bajamar binary star system, one of whose members is very massive, could be outside any stellar grouping. However, a recent study based on data from the Gaia space telescope revealed that this star was moving at high speed (about 25,000 kilometers per hour) from the central zone of the Bermuda cluster. It is therefore one of those stars called 'runaways', of which more than a hundred are already known scattered around the Milky Way.

Numerous of these runaway stars have been studied and it has been recognized that many of them were ejected from different clusters. When the density of stars is high, as it happens in the central regions of clusters, it is likely that the gravitational interaction between three or several of them causes some to be ejected at high speed, becoming a fugitive.

A group of astronomers, led by Jesús Maíz Apellániz from the Center for Astrobiology (INTA-CSIC) has now just identified new runaway stars ejected from the Bermuda cluster. To do this, astronomers searched the data obtained by Gaia from the area surrounding this cluster up to distances of 700 light years. Thus they have found nine star systems (a total of twelve stars) that have been ejected at speeds between 18,000 and 360,000 kilometers per hour from the central regions of the cluster. The trajectories of the ejected stars are shown as straight lines in the images accompanying this article: the circles indicate the current stellar positions and the pentagrams the calculated initial positions.

By studying the velocities and trajectories of these runaway stars, astronomers conclude that the ejections occurred in three successive events 1.9, 1.6 and 1.5 million years ago.

Specifically, the Bajamar star was expelled, along with four other star systems, in the event that occurred 1.6 million years ago.

The star that holds the speed record among all these fugitives is HDE 227 090, which has already traveled 500 light years since it was shot.

Runaway stars around the North America and Pelican NebulaDSS/CAB

What is most surprising about this study is that the ejected stars include the three most massive formed in the cluster and seven of the nine most massive. Until now, sporadic expulsions from clusters had been observed, but no cluster was known to have expelled most of its largest members, and in such a short period of time (400,000 years is a short period in relation to the life of a star). For having lost its older members, the Maíz Apellániz team has described the cluster as 'orphan'.

Although this is the only orphan cluster identified to date, astronomers think that such clusters could be abundant in the Milky Way.

However, the phenomenon has been able to go unnoticed until now due to the few data on runaway stars available until the arrival of Gaia.

Furthermore, very massive stars live for a short time as such;

at the end of their lives they explode to leave behind a black hole or neutron star type corpse, dark objects and very difficult to detect.

Looking at a cluster about 50 million years old, it now seems reasonable to think that it may have lost its most massive stars in the past, that they have been ejected and exploded hundreds or thousands of light years away from the cluster. and that its trace (a black hole or a neutron star) remains unobservable. In fact, it is tempting to speculate that there are numerous black holes and neutron stars wandering erratically and at high speeds through space.

The authors of this study estimate that the Bermuda cluster, by ejecting its most massive members, could have lost half of its initial mass.

Although the cluster was bound by gravitational interaction at birth, it seems that now it no longer has enough mass left to keep its stars together and, in fact, it is observed that the cluster is gradually disintegrating, with its stars gradually moving away. each other.

More generally, this study raises the possibility that when looking at star clusters, the most massive members have been missing us.

Perhaps we are underestimating the number of massive stars that form in the Milky Way per unit of time.

This number is important for reconstructing the history of our galaxy and predicting its future evolution.

The article by Maíz Apellániz et al., entitled "Escape from the Bermuda cluster: Orphanization by multiple stellar ejections", is scheduled for publication in an upcoming issue of the journal Astronomy & Astrophysics.

The manuscript can already be consulted at this link.

AstronomyThe space missions that will amaze us in 2022