They moved the duty point forward to the mountain at an altitude of 3414 meters, and "survived in the wilderness" for more than 600 days...

China News Service, Nujiang, January 15th Telegram: Yunnan Nujiang: Guarding people in the mountains for more than 600 days "forced" down the mountain due to blizzard   Author Dai Chao   In March 2020, due to the needs of border control work, the Yunnan Nujiang Border Management Detachment opened the border police station and moved the duty point forward to 2 kilometers near the No. 35 boundar 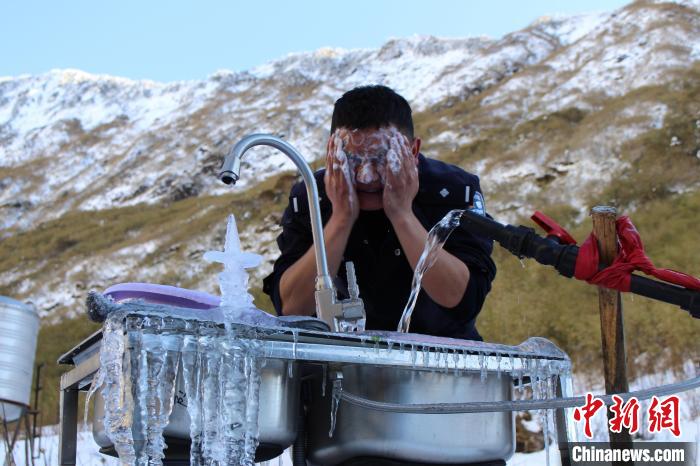 China News Service, Nujiang, January 15th Telegram: Yunnan Nujiang: Guarding people in the mountains for more than 600 days "forced" down the mountain due to blizzard

In March 2020, due to the needs of border control work, the Yunnan Nujiang Border Management Detachment opened the border police station and moved the duty point forward to 2 kilometers near the No. 35 boundary pile in Danzhu Village, Gongshan County.

This duty station is stationed at an altitude of 3,414 meters, and 94 batches of 376 people have been stationed here for more than 660 days.

"All personnel evacuated to the police office at the border of Danzhu on duty." On January 13, 2022, the duty point received an urgent task: due to the severe blizzard weather, it was very difficult to supply supplies, and the stationed personnel were notified to transfer down the mountain to the police office .

On the way down the mountain, the snow had reached a depth of 70 centimeters, and the police had to use excavators to shovel the snow to open the way.

Instructor Song Binbin breathed a sigh of relief. He was very impressed by the road down the mountain - it was a muddy road carved out of a cliff, which was blocked by heavy snow in winter and blocked by mudslides in summer.

"I still remember that in May 2020, a huge mudslide occurred in the jurisdiction, and dozens of landslides occurred on the mountain road of more than 20 kilometers. Fortunately, the personnel on duty were rescued urgently. The further down the mountain, the safer it is, even if it goes down a few kilometers. Okay." Song Binbin said.

The picture shows a policeman taking a shower.

"This is a virgin forest, there are snakes, worms, rats, ants, scorching sun and heavy snow, but there is no signal, no electricity, and no warm quilt. It is no exaggeration to say that it is 'wilderness survival'." One of the personnel who was approved to go up the mountain to carry out on-duty tasks.

"At that time, I lived in a two-story wooden house. It was cool in summer and like an ice cave in winter. But the most uncomfortable thing was that the mobile phone had no signal." Wang Hai recalled that he was stationed on the mountain for seven days, and he was isolated from the world for seven days. On the day, because I was in a hurry, I forgot to tell my family in advance. After going down the mountain, there were hundreds of missed calls on my mobile phone.

The moment they walked out of the jungle, the policemen would check each other's clothes and skin for foreign objects, because leeches and poisonous insects were everywhere.

"Later on, the living environment at the duty station has gradually improved, with electricity and signals." Song Binbin said, but in winter, water is still a big problem.

The water pipes at the duty points are often frozen due to the cold weather. When they wake up early in the morning, the police can only wash their faces with snow water, and then pick a bucket of clean and white snow to melt and cook.

The picture shows the police patrolling in the snow.

"The snow on the ground is very thick, and the cold wind hits the face like a knife." Recently, policeman Liang Jinchun encountered a blizzard while on patrol.

A group of people walked up the snowy mountain, followed by the police dog "Nineteen".

More than 70 centimeters of snow covered his thighs, and as soon as he walked out more than ten meters, he had to replace the next policeman to explore the road ahead.

The police came to the No. 35 boundary pile, took out binoculars to look around, and carefully checked whether there were any footprints nearby before going down the mountain in peace.

"It's much warmer here than on the mountain." This was the first night when Auxiliary Police Officer Feng Lijun moved down from the mountain and lived in the police office. "The air conditioner is installed, and the windows of the room are fitted with glass, and the temperature is several degrees higher. , unlike in the mountains, the bed is always cold, the bedding is always hard, and the wind blows all night."

The picture shows the police salute the national flag.

"We will move to the mountains in the future. The environment is difficult, but someone must stand there." Police Luo Jiang tossed and turned in bed and couldn't sleep. He hoped that the weather would improve as soon as possible, and he would immediately go to the mountains to patrol and paint Jie Zhuang red.