Ronnie Spector, the singer who broke through as the front man in the 60's group The Ronettes, has died at the age of 78. "Ronnie's music and soul will live on forever," Beach Boys member Brian Wilson said in a statement. 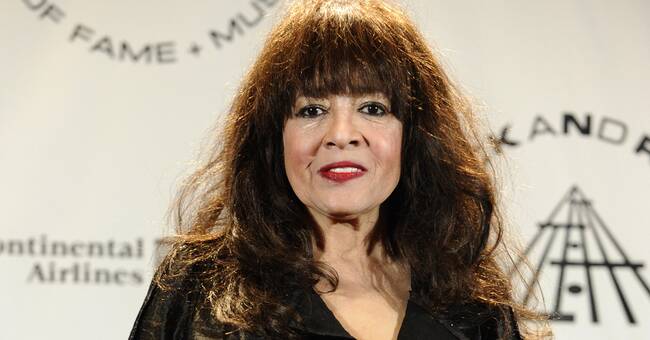 The singer's family confirms the death on Ronnie Spector's website.

She was with her family and her husband Jonathan.

Ronnie lived life with a twinkle in his eye, a cheeky attitude and a teasing sense of humor ", the family writes.

Ronnie Spector was born Veronica Bennett in 1943 in New York.

She, sister Estelle Bennett and cousin Nedra Talley formed the group The Darling Sisters in 1957 - a group that became better known as The Ronettes.

They sought out Phil Spector, who signed them to his company Philles Records in 1963. The same year, their iconic hit song "Be my baby" was released, written by their new producer along with Jeff Barry and Ellie Greenwich.

However, neither Estelle nor Nedra appeared on the single.

Phil Spector often used different singers from his stable without crediting them and was most interested in developing his signature sound image "Wall of sound".

"Be my baby" was the first song from Philles Records that had been recorded with an entire string orchestra in the studio.

The song has been named the best pop song ever several times.

Brian Wilson loved and became obsessed with "Be my baby" and described it as the history of music history as Albert Einstein's theory of relativity.

The Ronettes released songs like "Do I love you?"

and “Walking in the rain”.

In 1965, they were voted the third most popular group in Britain, after the Rolling Stones and the Beatles.

Their last single "I can hear music" was released in 1966.

Threatened with a gun

Ronnie Spector and the married producer had already started a business in 1963 and after Phil Spector's divorce in 1965, they married.

Ronnie Spector has spoken openly about how he often kept her locked in their shared home for several years and threatened to kill her and seize full custody of their three adopted children.

It must have lasted until she fled the house in 1972 - reportedly barefoot and completely without belongings, with the help of her mother.

"I knew that if I did not leave, I would die there," she wrote in her memoirs.

Ronnie Spector continued her career as a solo artist and in 1971 she recorded "Try some, buy some" on the Beatles' company Apple Records, where Phil Spector had become director with the task of finding new musical talents.

The song had been written by George Harrison, but did not hit.

In 2019, Ronnie Spector praised the movements Metoo and Time's up in an interview with The Guardian.