Summary: "The spirit of the times shines on the Hong Kong River" event followed one after another, experts say it inspires the long-term flow of Hong Kong Youth and Hebei

China News Service, Hong Kong, January 2 (Reporter Zeng Ping) Since June last year, a number of "The Spirit of the Times" events have been held in Hong Kong one after another: both Lunar Land made its first public appearance in Hong Kong, and mainland Olympic athletes also visited Hong Kong. There is also the "space-to-earth dialogue" between astronauts and YMCA. Many Hong Kong scientists said i 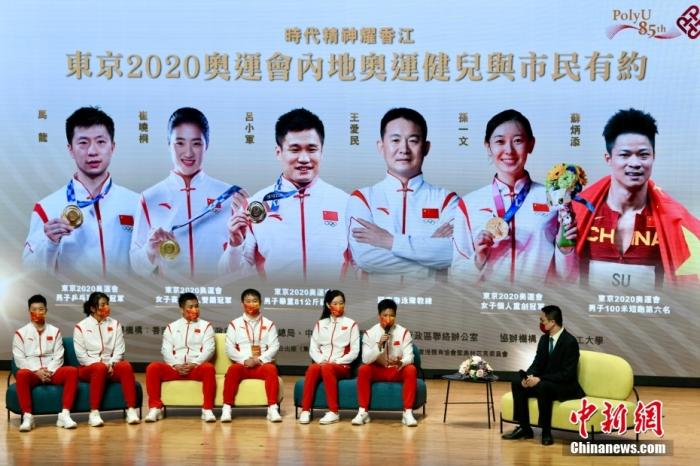 China News Service, Hong Kong, January 2 (Reporter Zeng Ping) Since June last year, a number of "The Spirit of the Times" events have been held in Hong Kong one after another: both Lunar Land made its first public appearance in Hong Kong, and mainland Olympic athletes also visited Hong Kong. There is also the "space-to-earth dialogue" between astronauts and YMCA.

Many Hong Kong scientists said in an interview with a reporter from China News Agency that the series of activities have a positive effect on Hong Kong youth, scientific workers and Hong Kong people. They hope that they will be held regularly in the future to let this impact last.

On the morning of December 5, 2021, some members of the delegation of mainland Olympic athletes to Hong Kong went to the Hong Kong Polytechnic University to attend the "Tokyo 2020 Olympic Games Mainland Olympic Athletes Have a Date with the Citizens" event.

The picture shows the members of the delegation from the Mainland Olympic athletes visiting Hong Kong interacting with the on-site teachers, students and citizens.

On June 22 last year, a team of scientists responsible for major national aerospace projects such as the Long March, Shenzhou, Beidou, Tianwen, and Chang'e arrived in Hong Kong for a five-day visit.

Immediately afterwards, the lunar soil brought back from the moon by Chang'e 5 in 2020 will be exhibited in Hong Kong for the first time.

The team led by Professor Wu Bo from the Department of Land Surveying and Geo-Informatics of the Hong Kong Polytechnic University participated in the mission of the "Tianwen-1" probe to land on Mars, responsible for the analysis of Martian topography and assisting in the selection of candidate landing areas.

They visited the laboratory and were very interested in the work and technology of the research team. Some students even expressed the hope that they would become PolyU students in the future and participate in it personally.

During the Lunar Soil Exhibition, a virtual reality system that can feel the landing sites of the moon and Mars, and the state of shuttle between different planets, triggered a long queue of visitors.

Wu Bo said that this system is expected to be exhibited at the Hong Kong Space Museum in the future in order to allow more Hong Kong people to increase their understanding of the national aerospace industry.

"These activities have played a very positive role in encouraging young people and young students in Hong Kong, helping them to enhance their sense of pride and belonging."

In addition to improving space knowledge, Hong Kong youths have had two opportunities to have direct dialogues with astronauts on missions in the past six months.

On September 3 last year, the Shenzhou 12 astronauts Nie Haisheng, Liu Boming, and Tang Hongbo who were in the core module of Tianhe launched a "world dialogue" with nearly 300 young Hong Kong students.

On the first day of 2022, more than a hundred Hong Kong students and astronauts Zhai Zhigang, Wang Yaping, and Ye Guangfu on the Tiangong space station talked about their aerospace dreams through live connections.

Chen Qingquan, the first academician of the Chinese Academy of Engineering in Hong Kong and an honorary professor of the Department of Electrical and Electronic Engineering of the University of Hong Kong, believes that only if a nation has the aspirations to explore the universe, this nation has hope.

China's aerospace science and technology used a shorter time and less money than foreign countries to enter the aerospace power, which shows that the Chinese nation has a strong ability to innovate.

These activities are of special significance and are an inspiration to Hong Kong youth, scientific workers and every Hong Kong citizen. I hope that the forms of activities in the future will be more diversified.

The "Spirit of the Times" series of activities since June last year also demonstrated to Hong Kong people the achievements of national construction and allowed Hong Kong people to have close contact with Olympic athletes.

The theme exhibition of major country construction and the exchange activities of mainland Olympic athletes visiting Hong Kong were successively held at the end of October and the beginning of December last year.

He specifically mentioned that many students in Hong Kong are interested in participating in national aerospace projects, and hope that YMCA will have more opportunities to visit and practice in space bases in the Mainland in the future, paving the way for them to participate in the national aerospace industry.