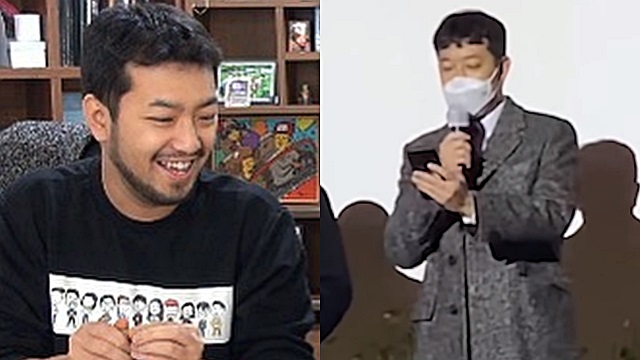 In the congratulatory speech of the last year of this year, netizens are leaving impressive comments saying, "Isn't it a marriage advertisement?"

In the video, writer Joo Ho-min and writer Lee Mal-nyeon attended the wedding of an acquaintance and took on the declaration of marriage and congratulatory speeches, respectively, and came out in front of the guests.

First, writer Joo Ho-min opened his mouth with a witty joke, "I was embarrassed when the groom and the bride were asked to declare the marriage for the first time, but we have both been married for over 10 years... Ah! I did.

Next, the writer Joo handed the microphone to the writer, saying, "Writer Lee Mal-nyeon, a 'veteran cohabitant' who has lived with Gian84, prepared a condolence message as a senior."

Writer Lee Mal-nyeon, who took out his cell phone saying that he had written a congratulatory address in advance, introduced himself, saying, "I am Lee Byung-gun, who has been experiencing married life for 10 years."

He continued, "If it's long, it's a long marriage, if it's short, it's a short marriage. Actually, I don't know yet how to make a marriage wise."

Writer Lee Mal-nyeon said, "Marriage is just the fun of having the person closest to me watch what I do, and I also watch that person's behavior and build up episodes that only each other knows."

The writer said, "Sometimes when you play online games, sad things happen. It's sad if you suffer alone without anyone knowing, but if you witness the injustice with someone else, it becomes a memory that you can laugh and shake off." It was defined as 'collecting blocks of memories that are each other's witnesses' and 'watching unfortunate events without unfairness'.

The author also wittyly described marriage as 'writing a comment on each other's posts without comments' and 'thinking about someone who is different from usual today'.

Netizens responded to this, saying, "You calmly move me with unambiguous words. I'm not a writer for no reason", "Why do I cry when I hear about the game", "I want to get married after hearing the congratulations", "It's a very nice expression. Isn't it a wedding advertisement?" He responded warmly by leaving a comment.

On the other hand, "Congratulations on your marriage with Ho-Min Jo", "The two of you are happy for a long and long time", "I think it's Kevin's wedding since I saw the thief duo congratulating me in the movie 'Home Alone'", "Ho-Min Jo who took the guise of congratulations" ' Standing Comedy", etc., are also receiving pleasant comments from netizens.