The "epidemic" line female player: there is light in the eyes and love in the heart 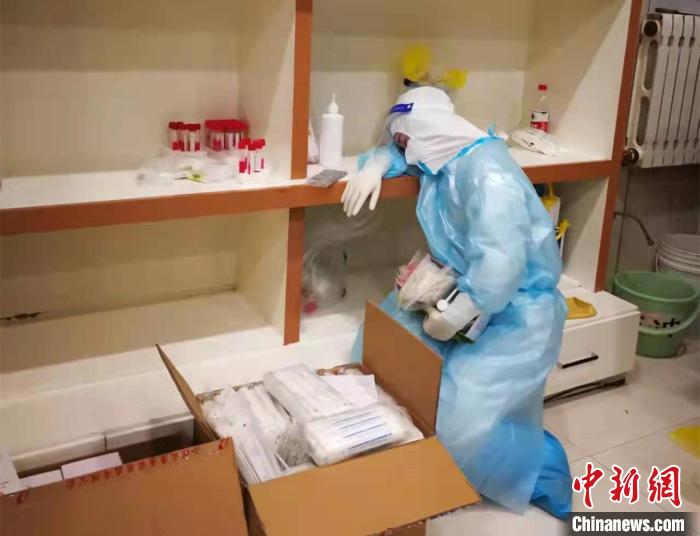 (Fighting New Coronary Pneumonia) The "epidemic" line female player: there is light in the eyes and love in the heart

China News Service, Manzhouli, December 23rd, title: "Pandemic" line female player: there is light in the eyes and love in the heart

The small town on the border with bright lights and weaving tourists pressed the "pause button" due to the outbreak of the new crown epidemic.

In Manzhouli City, Inner Mongolia Autonomous Region, in the past month of the outbreak, most of the things that can be seen in the city are “big whites” in a hurry. Not weak, guarding the lifeline of the people.

The picture shows the first batch of Nucleic Acid Sampling Team members from Genhe City to assist Manzhouli resting on the cabinet.

"I came to Manzhouli for assistance from November 29th. I have not fallen asleep for several days and I have been under a lot of pressure." Li Caiyan is the leader of the first batch of Nucleic Acid Sampling Team in Genhe City to rush to Manzhouli.

At the beginning of the epidemic, the situation was grim. All team members were on standby 24 hours a day, no matter what time they received the notification, they immediately set out on a mission.

She wrote in her diary: Because she was not used to be on duty like a soldier at any time, coupled with the heavy workload, several of my team members had a dumb voice and a heart attack...

"It's gone." They all persisted, and no one said, "Captain, I'm quitting, I want to rest."

On the evening of December 3, the team members went on a task to do 10 mixed 1 nucleic acid detection apheresis. This task is very risky. It has been confirmed that there are positive patients, but it is just a matter of quantity.

Due to the low temperature at night accompanied by strong winds, the hands of the players were sore and painful, and there was not enough light. "Blind sampling" made the sampling work more difficult.

In order to alleviate everyone's emotions, I joked: "My female athletes are very skilled, and they can complete tasks even if they can't find their noses and mouths."

On December 13, when team member Qu Kun went to participate in the training of the mobile phone scanning code collection system, he actually bought a lot of fruits, and everyone cheered for a while.

Female "God of War" meets her menstrual period: Persevere and never fall behind

After the outbreak of the epidemic in Manzhouli, all local shops were temporarily closed, but even the goddess of war had "distress" of last resort.

During the menstrual period, let alone the discomfort, even the necessities are hard to get.

The staff of the Manzhouli Health Commission and the hotel proprietress all took out their physiology supplies, but they could only make a temporary emergency.

Later, after coordination by local staff, the supermarket door was finally "pried". However, due to the epidemic, the shortage of stock or out of stock would still be in short supply.

Mingna didn't receive the physiological supplies, and weakly said to the captain, "Can you let them even give me two packs, or one pack..."

Mingna is the youngest member of the Manzhouli sampling team. She was on mission two days ago. Due to the high temperature in the isolation site and the menstrual period, she developed dizziness, nausea, and vomiting. However, she never said anything and insisted on not falling behind. .

The self-blame after the doctor's fall: If I pay more attention to it, it will be fine

"If you walked up the steps and paid more attention, you won't fall." Li Ying, a doctor from the Zhongmeng Hospital in Zhalantun City, rushed to help Manzhouli, because she could not continue to stick to her post because of her fall, and she has been blaming herself.

On December 19, when Li Ying entered the house to collect nucleic acids for key groups of people and was ready to leave the unit, because there was frost on the goggles, she did not see the snow-covered steps, and fell down after stepping on the air, causing her chest 12 and waist 1. Fracture of the left transverse process.

"I came to Manzhouli to support this time, and the workload was very heavy." Since November 28, Li Ying and her teammate Chen Gongliang began to collect nucleic acid samples for 615 residents in a community in Manzhouli City, and they stayed there for 20 days.

I have to gather more than 600 people a day, and I am busy for more than 10 hours. I can only sleep a few hours a day without eating, drinking, or going to the bathroom. Li Ying overcomes these difficulties one by one, but she “lose”. "It was an accident.

When the epidemic broke out in Wuhan in early 2020, Li Ying, then 25, rushed to the Wuhan Pulmonary Hospital with her team.

For Li Ying, she is already an "veteran" on the front line of helping the epidemic.

Li Ying said that the winter in Manzhouli is very cold, and there are always snowflakes in the wind.

The enthusiastic residents in the community gave her and her teammates a cotton coat. She has been wearing the protective clothing. There is also the thank-you letter with many residents’ names, and the handwritten newspaper full of petals and love...

Li Ying took photos of her cotton coat, thank-you letter and handwritten newspaper one by one.

Nowadays, lying on the hospital bed, she always pulls out these photos from time to time to take a look.

In Li Ying's heart, no matter whether he is helping Wuhan or Manchuria, as long as there is light in his eyes and love in his heart, the responsibility and responsibility of the angel in white will always be there.

She said that after she recovered and was discharged from the hospital, she would fight with everyone.