Being the daughter, granddaughter and great-granddaughter of cooks, and raised among hundreds of aromas and flavors, it would not be unreasonable to think that she was born in uniform and with a well-trained palate. His... 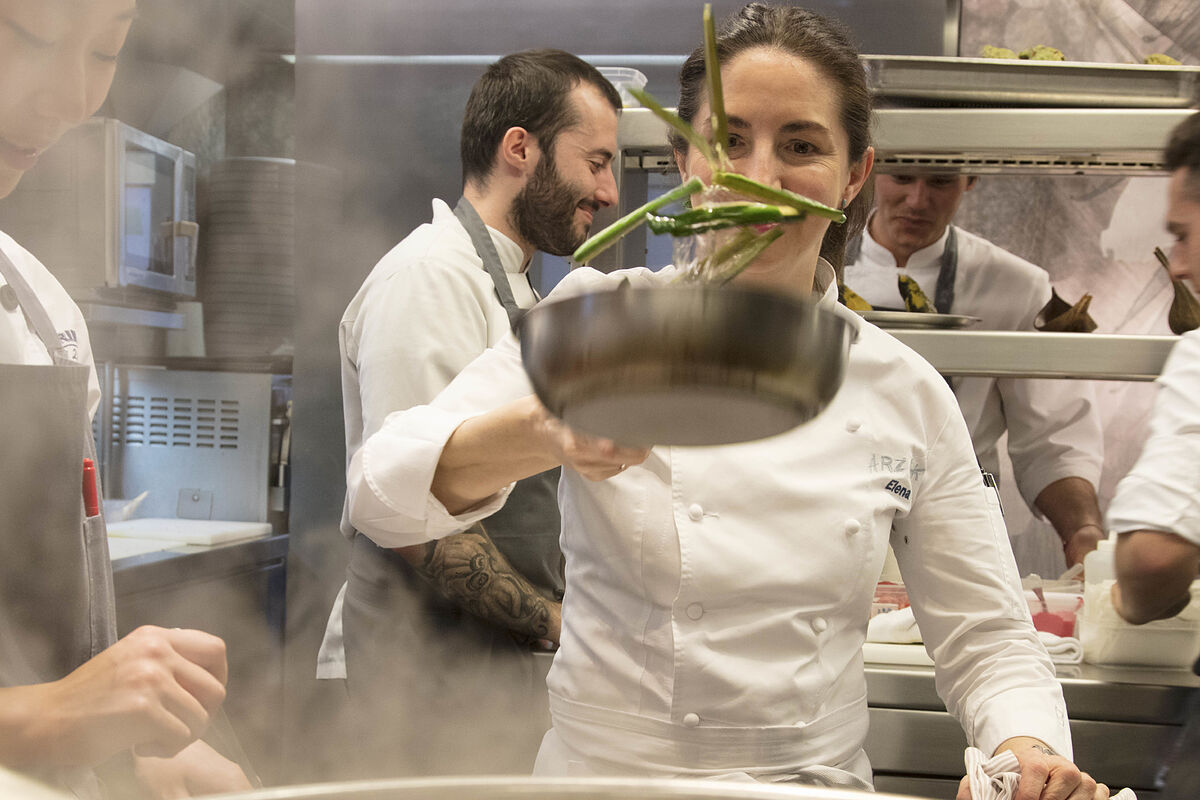 and raised among hundreds of aromas and flavors, it would not be unreasonable to think that she was born in uniform and with a well-trained palate.

His first taste is transferred to the family kitchen, also his first memories, his first experiences or his first smell.

The catalog is overwhelming, but there is one that he remembers with special vividness:

"Every Saturday he cooked at home and woke up with it. I was unable to wait for it to cool down. Recently I identified an identical aroma in Avilés, at the Casa Gerardo restaurant, and I was able to confirm that it is a true gastronomic gem."

She is the only chef in Spain at the helm of a restaurant with that triple distinctive that accredits her having made the leap to excellence for quality, creativity and care in her dishes.

Its basic ingredients, those with which a whole world could get out of nowhere, although austere, are the treasures of Spanish cuisine:

it reveals without hesitation.

Needless to remember that she is the daughter of the mythical chef Juan Mari Arzak.

From him he learned Basque, evolutionary and signature cuisine.

"The first thing he taught me," she says with pride, "was

for gastronomy and for the people who come to spend a very special moment. I knew it since I was little, when I went to the restaurant for two hours every day, together with my sister. I looked and thought: how difficult and at the same time how beautiful ".

He received training in the most prestigious kitchens in the world without taking his eyes off the San Sebastian family restaurant from which he speaks, a century-old mansion that his grandmother Francisca transformed into a food tavern and his father into a proverbial reference point of international gastronomy. From his grandmother he took a very wise lesson:

"The first thing is that it tastes rich, and then that it does not give debts."

With these roots and excellence as a goal, Elena strives to give continuity to a kitchen with very defined signs of identity: "Basque, author, research, evolution and avant-garde".

Father and daughter form an indestructible tandem and the admiration is mutual.

They both have a pile of medals and accolades, but they still have a lot to give.

"You can always go one step further

and contribute even more to international gastronomy," he says.

"Being Arzak implies that, respect, the transmission of values ​​from generation to generation, the responsibility to contribute to international gastronomy, appreciate local products and look to the future."

It is, on the other hand, the best legacy he has chosen for his children,

"They will choose their vocation. I am content to give them those values ​​and teach them to cook so that they eat healthy, for survival and to enjoy sharing something that tastes good, just as they instilled in me," he adds.

To define your kitchen, use two words,

The first term, he clarifies, was invented by the gastronomic critic Pau Arenós to define a cuisine that addresses the heart and seeks an emotional experience appealing to all the senses, including touch. "The territory concept vindicates the products of the area," he adds.

Although it is hard to believe, he has also had a moment of those 'Earth, swallow me'. "On an internship at Le Vivarois, chef Claude Peyrot's Parisian restaurant, one day, 10 minutes before opening, I noticed that the

I had in the oven was lacking in shine. I didn't understand what was happening until I saw that, in Instead of sugar, I had added salt. That day, at noon, no apple pie was served and I was very upset ".

After knowing this setback, we are less of a hurry to ask you to share a Michelin star trick that we can apply (without being left in the attempt) at our table.

"Above all, illusion", he replies, "is the opportunity to take out those dishes reserved for special moments, to put a table with color that expresses harmony, beauty, joy and magic".

-Pudding from Krabarroka, one of Juan Mari Arzak's mythical dishes.

It can be prepared in the morning and served with a vinaigrette or mayonnaise with a slight hint of mustard.

-A bit of seafood.

Mussels are a wise and inexpensive choice.

He mentions the pea as a great option and suitable for more modest pockets, although he advises trusting the good judgment of the fishmonger.

-Free-range chicken stew with a touch of ginger that will give it freshness.

In addition, it can be prepared in advance.

-Apple and dried apricot compote, with a touch of cinnamon.

His advice: reduce the amount of sugar.

They cannot be absent from the Christmas table.

-Chacolí (normally white wine that is produced mainly in the Basque Country).

PsychoCharlene from Monaco, Meghan Markle or Masako, the sad princess syndrome: "They must meet unattainable goals"

LifestyleFrom violet in fashion and decoration to fir rental: all the winning trends this Christmas

LifestylePsychological benefits of spinning, the sport that brings happiness