China News Service, Manzhouli, December 10th, title: Two weeks of war in Manzhouli: touching, dawning, and the special "expectation" behind returning home   China News Service reporter Li Aiping   In the past two weeks, due to an outbreak of the epidemic, the border city of Manzhouli in China has no choice but to press the "pause button". This is also the fourth epidemic attack that this centu 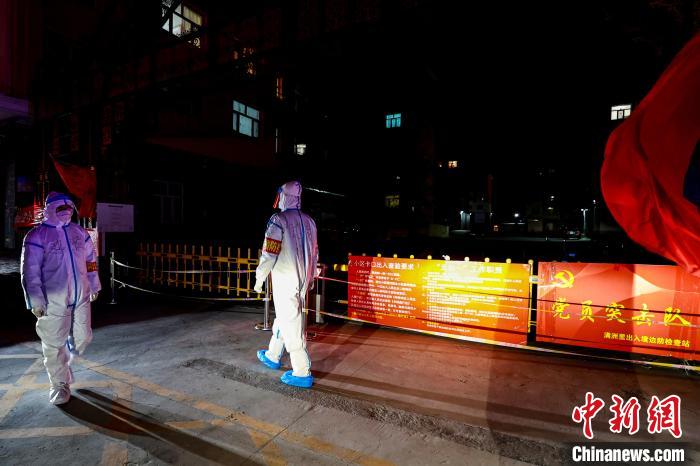 In the past two weeks, due to an outbreak of the epidemic, the border city of Manzhouli in China has no choice but to press the "pause button". This is also the fourth epidemic attack that this century-old port city has encountered since 2020.

On November 27, the epidemic broke out in Manzhouli.

As of 14:00 on December 10, Manzhouli had reported a total of 512 confirmed cases of new coronary pneumonia.

The local people said, “After the initial suffering, the most talked word in the past few days is'I look forward to seeing the dawn as soon as possible.'”

The picture shows the police at the border checkpoint in Manzhouli at night.

Moved under the epidemic

On December 4, a Moments video made Li Hongqi, who was sticking to a bayonet in a community in Manzhouli, broke the defense.

Wang Rui, who is in tears in the video, is the wife of Li Hongqi, a policeman at the border checkpoint in Manzhouli.

The two worked on the front line of the epidemic, and their 17-month-old baby had to be looked after by a sick mother.

"As long as we keep working hard, the epidemic will definitely dissipate." Li Hongqi said.

"The border police are on duty carefully, you have worked hard!" "Fight on the front line day and night, salute you!" On the evening of December 5th, Ms. Gu, a resident of the community, delivered the dumplings and left a note to the police on duty. : You guard my health, I warm your heart.

In the Aimin Community in Zarainuoer District, Manzhouli, due to the isolation and isolation, some elderly people living alone have difficulties living, and the police on duty provided help within their capacity.

Resident Grandma Li was deaf and mute, and the police used simple sign language to communicate with her, helping Grandma Li to do a nucleic acid test. During the inspection, it was found that the 90-year-old Uncle Li’s living supplies had "bottomed", and the policeman Yuan Limin immediately bought milk. He and the eight-treasure porridge were sent to the old man's home, and his contact information was left.

"Seeing you, I have a backbone in my heart, and I am particularly moved." Uncle Li sighed.

"The outdoor temperature is getting lower and lower, especially in the second half of the night everyone stomped with the cold, but no matter how difficult it is, we can overcome it."

The picture shows the border policemen delivering daily necessities to the quarantined people at home.

"I believe that the epidemic will be overcome soon, and everyone will not see the dawn too far away." This is the truest feeling in Wu Haitao's heart, who has participated in the war against the epidemic in the past two weeks.

In his words, "A veritable anti-epidemic family can overcome no matter how difficult it is."

As a "guard of the country", Wu Haitao's work is mainly to inspect car bodies at railway freight ports, and contactlessly verify employee certificates.

He said, "Despite the epidemic, the railway freight ports are still clearing customs normally, so we dare not slack anymore."

Wu Haitao is just a microcosm of the "Guardians of the Country".

"This is the third time for the commando team!" Yu Guojuan, an instructor of the first team at the Manzhouli immigration and border checkpoint, said that the first team set up a party member commando team last year, which is responsible for sealing and controlling the Baolian community and guaranteeing all the staff during a special period. After the outbreak of the nucleic acid detection task, everyone was moved by the order, and no one was left behind.

It is worth mentioning that in order to support the epidemic prevention and control work at the Manzhouli entry-exit border checkpoint, 54 police officers have rushed to the checkpoints of the communities in Manzhouli City to perform the closed management tasks of the communities, and to assist in the implementation of "clearing numbers, clearing nucleic acids, Clean up the work of "three cleansing".

The latest news that reporters got from the Manzhouli entry-exit border checkpoint is that under the epidemic situation, the independent combat unit policemen on duty in the high-risk areas of the port have an average daily duty time of more than 10 hours; the policemen in guardianship and inspection positions stay on guard 24 hours a day, 7 days a week. Retreat to ensure the safe and orderly operation of the port.

"Looking forward to the end of the epidemic, we will go home"

On the 10th, reporters received information from the Hulunbuir Public Security Bureau that since the outbreak of the epidemic in Manzhouli, the epidemic-fighting police and auxiliary police of the bureau have received support from their families while protecting the lives and health of the people.

And after two weeks of the war epidemic, these policemen all said, "I look forward to seeing the dawn of victory at an early date."

In a set of videos provided by the Hulunbuir Public Security Bureau, the sincere confession of Wei Yanlin, Han Changgui and others moved people.

Wei Yanlin is the captain of the Second Patrol Brigade of the Anti-terrorism and Special Patrol Detachment of the Public Security Bureau of Hulunbuir. He is currently working in the confirmed case building in Manzhouli, and is mainly responsible for the interior work of the case building.

Under the epidemic, "retrograde" like Wei Yanlin is also the most beautiful scenery in Manzhouli to fight the epidemic this time.

"Daughter-in-law, you have worked hard too. When I am away from home, I hope you and your children will do a good job of protection." Han Changgui, deputy head of the Anti-terrorism and Special Patrol Brigade of the Manzhouli City Public Security Bureau, said this in a very low voice.

As a member of the war epidemic, Han Changgui is currently in charge of epidemic prevention on duty in the epidemic control district in Manzhouli City.

In the video, he said to his wife, "Don't worry about me. Our protective measures are doing very well. Now all parts of the country are helping Manchuria. I believe we will be reunited soon."

Many local people said in an interview with reporters that with the continuous care of all sectors of society, Manzhouli will surely usher in the day when the epidemic will be overcome.