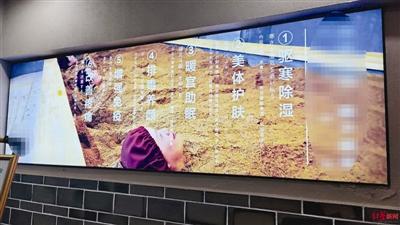 Recently, an "enzyme bath" health-preserving program that claims to be able to lose weight, whiten, dehumidify, and even treat rheumatoid arthritis has emerged in China and has attracted many people's attention.

What is the effect?

A few days ago, the reporter made an unannounced visit to an "enzyme bath" business in Chengdu.

According to the merchant, “burying” in a tank with a fermentation temperature of 65°C for 15 minutes consumes energy equivalent to running 6 kilometers. Long-term persistence has many benefits.

However, in the whole process, apart from sweating a lot, the reporter did not feel any obvious changes in his body, and red and white markings appeared on his arms.

According to the doctor's judgment, it is a trace of high temperature burns.

Doctors believe that the effect of "enzyme bath" is similar to bathing.

And because the temperature of the "enzyme bath" is too high, skin burns are likely to occur.

If there is a wound on the skin, it may also cause serious consequences of infected bacteria.

"Suck the essence of fermentation to complete the rebirth of the soul and the flesh, and hope to sow seeds in winter, and reap a better self in spring." On social platforms, every beautiful girl after soaking in the "enzyme bath" is like a story of rebirth, letting more and more come The more Ms. Amy's hearts are moved.

Where is the magic of "enzyme bath"?

According to the descriptions of major bloggers, by heating the human body in "rice bran" or "sawdust" containing enzymes, the health effect can be achieved: fat reduction and skin beautification, shoulders are not sore, even rheumatoid, arthritis Okay...

The reporter searched and found that the "enzyme bath" that is currently popular all over the country is also emerging in Chengdu, with a single charge ranging from tens to hundreds of yuan.

Many businesses in Chengdu searched by the reporter claimed in their literature that "enzyme bath" can eliminate fatigue, insomnia, and constipation.

A merchant has played out the "six major benefits" in the store: dispelling cold and dehumidifying, body and skin care, warming the palace to help sleep, detoxification and beauty, strengthening immunity, and improving sleep.

There are also many guests who come to patronize.

The above-mentioned merchants said that at most they received more than 20 customers a day, and due to the limited number of receptionists, they even needed to line up in advance to make an appointment.

The reporter experienced an "enzyme bath" and his arm was burned

Red and white markings appear on the reporter's arm

What is the effect of "enzyme bath"?

On November 26, the reporter went to a business in Wuhou District as a consumer.

Customers need to put on disposable underwear and enter the greenhouse enzyme pool to "bury" for at least 15 minutes.

The pond is filled with small materials that look like soil, accompanied by a sour smell.

When the fermentation temperature reaches 65°C-70°C, a hole is dug in the pond, and the customer lie in and bury the body.

"Soaking for 15 minutes is equivalent to the energy and calories consumed by running 6 kilometers." The staff said that they walked into the enzyme pool barefoot and used a shovel to dig a long pit in the "soil" for the reporter to lie in.

A few minutes later, except for the head, the reporter's body was completely "buried". He immediately felt a high temperature and began to sweat all over his body.

After 15 minutes, the whole body bath was over, and the reporter was taken to the rest area for "secondary sweating". The whole process lasted about 90 minutes.

The reporter found that red and white markings appeared on the inside of the arm near the elbow joint.

In this regard, the staff said that it was because the body "has blocked the poisonous gas, so that some acne or red and white cold and wet lines were produced, which are all normal."

Regarding the markings on the reporter's arm, Gao Jie, the attending physician at the Prevention Center of Chengdu First People's Hospital, said that it was actually caused by high temperature burns. She suggested using scald cream to take care of it.

"Enzyme bath is equivalent to sauna and hot bath. However, the temperature of enzyme bath is too high, so it will bring the risk of burns to human skin and mucous membranes." Gao Jie said.

Enzymes cannot break through the skin

From a medical point of view, does "enzyme bath" really have the effects of weight loss, whitening, and dehumidification?

In this regard, Gao Jie pointed out that taking an enzyme bath is actually equivalent to a sauna and a hot bath.

Enzyme is essentially an enzyme, and this macromolecular substance cannot break through the skin barrier and enter the human body.

Lu Lei, a nutritionist at the Nutrition Department of the 363 Hospital, said that enzymes cannot speed up metabolism to help lose weight. The reason why some consumers have lost weight is mostly caused by human body sweating. As long as they are hydrated later, this Part of the weight will be restored.

Can "enzyme bath" dehumidify and detoxify?

Lu Lei pointed out that dampness removal cannot be simply regarded as sweating. Many businesses on the market have secretly changed the concept and simplified the complex system of removing dampness and cold in traditional Chinese medicine.

And "the water that is discharged is not toxins in the body."