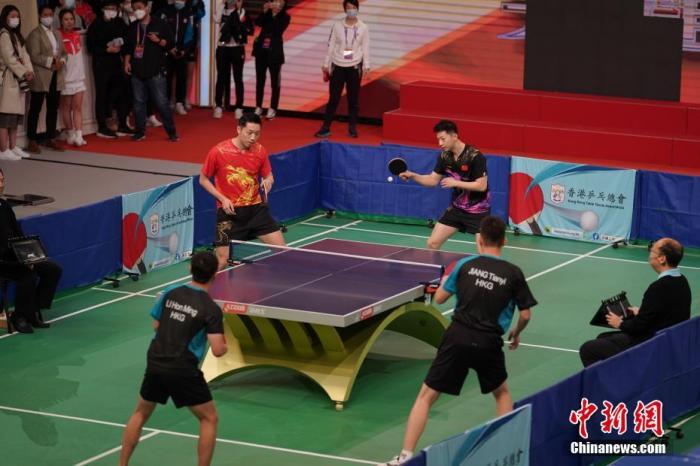 China News Service, Hong Kong, December 4th (Reporter Han Xingtong Chen Xiaoyuan) On December 4th, the mainland Olympic athletes’ delegation’s visit to Hong Kong entered the second day. The members of the delegation had a multi-channel exchange with Hong Kong citizens, including Demonstration performances of a number of sports events, exchanges with Hong Kong Disciplinary Forces and primary and secondary school students, have set off an upsurge wherever they go.

In the morning of the same day, the members of the delegation were divided into four groups. Two groups of athletes participated in the demonstration performance of "Olympic Athletes Exhibition Style".

China News Agency reporters saw it at the Queen Elizabeth Stadium. The atmosphere on the scene was very warm. Except for the seats vacated by the epidemic prevention regulations, the audience seats around the venue were full.

Most of the spectators were holding national flags and regional flags. Fans made their own hands and commemorative cards of Malone and Xu Xin. They entered the stadium to cheer for them.

Since the athletes appeared on the field, there has been endless applause and cheers.

The athletes demonstrated their "sports acrobatics" in multiple events, such as the "Parallel Bars King" gymnast Zou Jingyuan posing cute and funny on the inverted parallel bars; Ma Long and Xu Xin played a "magic circle"-around table tennis The table is played from inside the fence to outside the fence.

Hong Kong athletes and mainland athletes compete on the same court. In addition to badminton and table tennis athletes teaming up for doubles, Jiang Minjiao, known as the "Goddess of Fencing" in Hong Kong, and mainland fencing athlete Sun Yiwen also had a "peak". Duel.

At the scene, the audience pulled up a banner that read "China Diving Dream Team YYDS", and Wang Zongyuan responded with a heart-shaped gesture.

On the morning of December 4th, some athletes from the mainland Olympic athletes delegation came to the Victoria Park Swimming Pool in Causeway Bay, Hong Kong, to demonstrate diving and swimming to the audience, demonstrating the demeanor of the Olympic athletes.

The picture shows the diving athlete Wang Zongyuan making a heart-shaped gesture to the audience.

In addition, five athletes, including Su Bingtian, Chen Lijun, and Gong Lijiao, went to the Fire and Ambulance Academy to meet with members of the disciplined services, share their success stories, and perform demonstrations.

There are many people in the stands holding humanoid cards of Su Bingtian, Liu Shiying and others, shouting the names of their idols.

The mainland Olympic athletes shared their experience of participating in the competition and demonstrated related sports skills.

Six athletes and coaches, including Li Wenwen and Shi Zhiyong, came to the Ma On Shan campus of the Hong Kong Technical College to carry out exchange activities with Hong Kong students.

At the event, the Olympic athletes interacted enthusiastically with the students, and the youth of Hong Kong had a deeper understanding of the spirit of the Olympics through questions and answers on Olympic knowledge and scenes.

On December 4th, some athletes from the mainland Olympic delegation visiting Hong Kong exchanged views with members of the Hong Kong Disciplinary Service at the Hong Kong Fire and Ambulance Academy.

In the evening of the same day, all the athletes of the delegation gathered at the Queen Elizabeth Stadium to participate in the "Olympic Athletes Grand Parade" variety show. This was the culmination of their three-day visit to Hong Kong.

While the athletes showed extraordinary sports style in the grand performance, they also revealed the true and amiable side of life.

After the performance, a large number of spectators stayed outside the stadium, reluctantly bidding farewell to the team of athletes.

Citizen Miss Lu said in an interview with reporters that it is very rare for mainland Olympic athletes to visit Hong Kong during the epidemic, and she was very touched by this. Continued the sports boom since the Tokyo Olympics.

Su Yongan, the co-founder of the Hong Kong Restart Alliance, told reporters that the visit of the "Olympic Mission" to Hong Kong has brought full positive energy to Hong Kong, which fully reflects the care and love of the central government for Hong Kong people.