December offers us wonderful opportunities to observe our neighbors in the solar system. Venus, Saturn and Jupiter shine brilliantly in the evenings, while ... 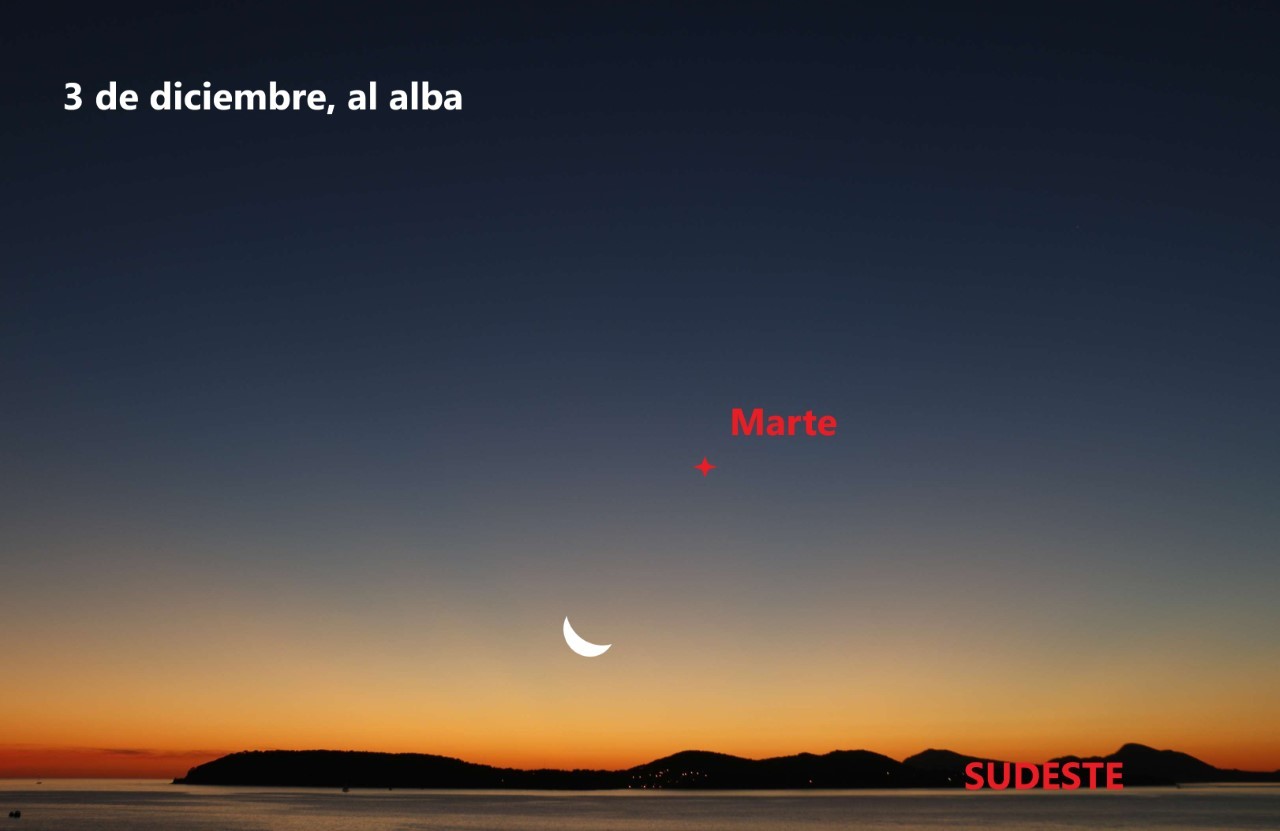 December offers us wonderful opportunities to observe our neighbors in the solar system.

Venus, Saturn and Jupiter shine brilliantly in the evenings, while Mars begins to be seen at dawn.

As we approach the winter solstice, the nights get longer and longer, thus offering us more opportunities for observing the night sky.

Venus, Saturn and Jupiter are visible from dusk and are close in the sky, so they will form beautiful conjunctions.

The best time to observe them simultaneously is when a little more than an hour has passed after sunset, that is, around 7:00 pm - 7:30 pm (peninsular time).

To the southwest we can see the splendid glow of Venus and, looking south and higher, the discreet orange glow of Saturn and the most intense of Jupiter.

On December 6, the Moon will join the planetary trio, appearing very close to Venus.

The fine crescent quarter will then approach Saturn (on the 7th)

We will therefore have the opportunity to observe four bodies of the solar system in a small region of the celestial vault.

After twilight, as the night progresses, Jupiter and Saturn will lose height, and each day they will be a little lower.

In late December, Saturn will only be visible for an hour after sunset, in the southwest.

Although Venus, Jupiter and Saturn appear so close in the sky, remember that they are at very different distances from Earth.

The distance to Venus is now only 58 million kilometers (39% of the Earth-Sun distance), which is why it appears so extremely bright.

The distances to Jupiter and Saturn are 780 and 1575 million kilometers, respectively;

The fascinating journey of the red planet

The morning star these days is Mars which, compared to the splendid evening stars, shines very modestly.

It is half as bright as Saturn and nearly 400 times dimmer than Venus.

However, it is exciting to see how Mars is slowly returning to our skies. Now it is still very far from Earth, about 370 million kilometers (much further than the Sun). But, in the coming months, the red planet will get closer to us and, as it passes through all the constellations of the Zodiac, it will form beautiful conjunctions with the other planets: with Venus in February, with Saturn in April and with Jupiter in May. Thus, traveling through the zodiacal band, it will progress through the sky, until its opposition with the Sun, the optimal moment for its observation, which will take place on December 8, 2022 when, in addition, it will be hidden by the Moon.

Mercury will appear timidly on the western horizon, after sunset, in the last days of the month.

As usual, due to its weak brightness and low elevation it will be difficult to observe, but to locate it we can be guided by its proximity to Venus.

In December there are two major meteor showers.

The Geminids take place between the 4th and 17th, reaching their maximum activity on the night from the 13th to the 14th. However, the already very high Moon (the full moon will take place on the 19th) will screen the tracks of the meteors for much of the time. evening.

We will have to wait around 4 am, when Selene has gone to bed, to enjoy a dark sky.

After the Geminids, the Ursids make their appearance (who have their radiance in the Big Dipper, from where their name comes). The maximum activity of this meteor shower will take place on the night of the 22nd to the 23rd, when the Moon will already be waning, but still very illuminated. Therefore, on this occasion it will be preferable to look for the meteors in the first part of the night, before the lunar sunrise.

During these long nights, let us take a moment to direct our gaze towards the immense skies.

It will be much better if we can do it away from light pollution, which is now irresponsibly triggered to stimulate the consumerist debauchery of the Christmas campaign.

The planets, the stellar profusion, the Milky Way and other wonders behind the transparent winter skies, these are the true lights, the ones that produce deep sensations and make us reflect on our presence in the world and on our way of life.

Eruption on La Palma The future of a 'Galician' volcano: "It neither ends nor is it going up"

Granada They register an earthquake of magnitude 2.2 with an epicenter in Ogíjares