Chinanews.com, Chengdu, December 2   Author: Yao Xin Yu Henghuan   "Classmates, grandpa teaches everyone to squeeze a frog in this class." Recently, Zhang Xiongzhi and his apprentice Luo Ronghua were teaching students how to squeeze dough in a class at Jincheng Middle School in Xichong County, Sichuan Province. With the continuous change of technique, the lifelike "little frogs" jumped out, an 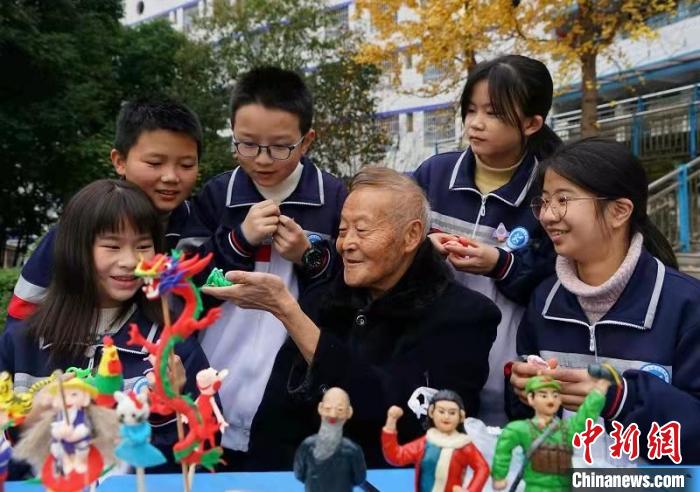 "Classmates, grandpa teaches everyone to squeeze a frog in this class." Recently, Zhang Xiongzhi and his apprentice Luo Ronghua were teaching students how to squeeze dough in a class at Jincheng Middle School in Xichong County, Sichuan Province.

With the continuous change of technique, the lifelike "little frogs" jumped out, and the students were amazed.

Starting in 2020, Zhang Xiongzhi and his apprentice Luo Ronghua will go to several kindergartens, primary and secondary schools in Xichong every week.

In order to make more students interested in facial sculptures, they continue to improve teaching methods suitable for students of different ages. They choose ultra-light clay commonly used by children in materials, lead them to make favorite animated facial sculptures, and at the same time teach traditional Chinese cultural stories.

Zhang Xiongzhi showed the face to the students.

"Xiao Luo calms down, he's a seedling!" Looking at Luo Ronghua, who was carefully instructing the students in the details of facial sculpture, Zhang Xiongzhi said that Luo Ronghua was the only one among the five or six apprentices who learned craftsmanship from him.

On the streets of Xi'an in the 1970s, a Shandong-born noodle master was crowded by many people to buy, and the 26-year-old young man Zhang Xiongzhi stared at the master's hand intently.

He has been fond of folk art since he was a child, and he learned art from his master on the same day, but was rejected by the master.

So he came to the place where the master's stall was set up to help silently every day. After more than half a month of "hunting down", the master was finally moved by Zhang Xiongzhi and accepted him as a disciple.

After that, Zhang Xiongzhi followed his master to Xi'an, Lanzhou, Wuhan and other places, and started a flourish business.

"The master leads the door, and the practice depends on the individual." During the day, Zhang Xiongzhi carefully observed the master's every move and kept the relevant essentials in mind.

In the evening, under the weak light, he practiced over and over again, "The craftsmanship is to compete with yourself. If you don't pinch, you can't sleep." Zhang Xiongzhi said.

After returning to his hometown of Sichuan, Zhang Xiongzhi, like a master, took up the burden of the noodles, holding up the noodles in Xichong, Nanbu, Lang and other places.

This craft from the north is deeply loved by people. His dough figurines are always filled with "audiences". Over time, everyone kindly calls him "Mianren Zhang".

"There are generally three steps in making dough, the first is to make the dough, the second is to shape the image of the dough, and finally the post-processing." Zhang Xiongzhi said.

In the process of making noodles, he found that the surface of noodles kneaded with ordinary flour was easy to crack and mold. In order to overcome this problem, he continued to study the formula, using flour, glutinous rice flour and other raw materials in different ratios to test repeatedly, plus With a certain amount of preservatives, latex powder, etc., the dough made in this way can maintain no deformation, no cracking, no fading, and no mold for seven or eight years.

If the precision of the technique is hard work, then the rich knowledge reserve and the meticulous observation power are out-and-out "soft power."

"Before making dough, you must first have a sense of confidence, not only the appearance, but more importantly, the charm." Zhang Xiongzhi said that only by understanding the cultural connotation behind the image of the dough can the work be alive and lively.

To this end, he read a lot of famous works such as "Water Margin" and "The Romance of the Three Kingdoms", figured out the characters' personalities, and imagined their demeanor and psychology.

"Only in this way can the face person'live'." Zhang Xiongzhi said.

In Zhang Xiongzhi's house, various traditional facial sculptures such as Guan Gong and Zhang Fei are dazzling. At the same time, the cartoon characters and anime characters that are beloved by children and young people such as Pleasant Goat, Bald Qiang and Xiong Da are also dazzling.

"The face man must also keep pace with the times." Zhang Xiongzhi said that in order to make a good cartoon face sculpture, he watched cartoons with his grandson every day, and took pictures on the TV with his mobile phone, and practiced with the mobile phone photos again and again.

In addition, he made facial sculptures of figures such as General Ji Xin and Mr. Zhang Lan based on the history of Xichong, making his works more characteristic of the times and local culture.

In the inheritance and innovation year after year, Zhang Xiongzhi's dough sculpture skills have gradually improved, and even attracted many people to "customize with pictures."

“The craftsmanship used to feed the family in the front is now an intangible cultural heritage, and the meaning and form it confers is richer.” Zhang Xiongzhi said, “Let more people understand dough sculptures, like dough sculptures, and let traditional culture come in. In their hearts, it is the best inheritance and protection of the art of face sculpture." (End)