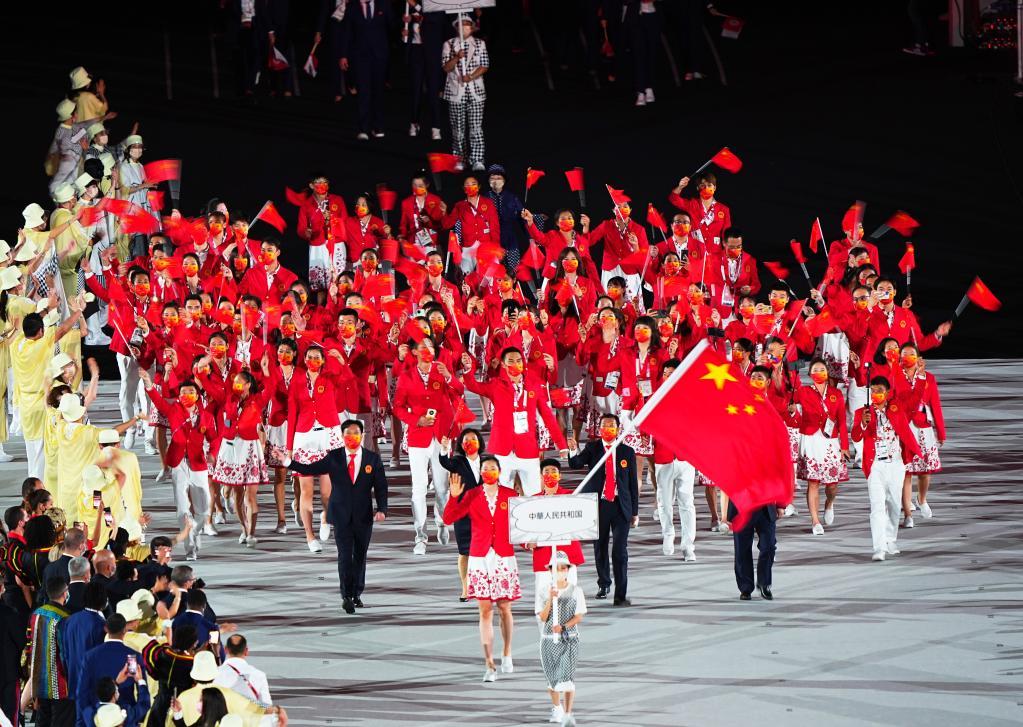 The picture shows the Chinese sports delegation entering the stadium at the opening ceremony of the Tokyo Olympics on July 23.

The following is a profile of the characters (in order of project):

In the men's 100-meter semi-finals of the Tokyo Olympics, Su Bingtian broke the Asian record with a speed of 9.83 seconds. He ranked first in the semi-finals and advanced to the final, becoming the first Chinese to stand on the runway of the men's "flying man" final of the Olympic Games.

After that, Su Bingtian won the sixth place in the final with 9 seconds 98, making history again.

Running 10 seconds twice in such a short time is a miracle in Asia.

On August 1, Gong Lijiao at the award ceremony.

Gong Lijiao has practiced shot put for 21 years and is a leading figure in Chinese women's shot put.

At the Tokyo Olympics, Gong Lijiao, as the "four dynasty veteran" of the Olympics, wrote the "Legend of a Veteran".

In the final, she repeatedly set her personal best and finally won the championship with a record of 20 meters 58.

This is also the first field event gold medal in the history of the Chinese Olympics.

On August 6, Liu Shiying celebrated her victory after the women's javelin final in the Tokyo Olympics.

At the critical moment, the strength and stability of the mentality played a decisive role.

In the finals of the 4X200m freestyle relay in the Tokyo Olympics, Yang Junxuan, Tang Muhan, Zhang Yufei and Li Bingjie teamed up to defeat the two popular American and Australian teams, winning the championship and breaking the world record with a time of 7:40.33.

Yang Junxuan swims the first bat, gaining a lead for the Chinese team.

Yang Junxuan has a quiet personality, loves painting and calligraphy, and is a "little talented girl" in the swimming team.

On New Years and holidays, the gifts she often gives are autographs, couplets and blessings.

On August 3, Chinese player Xie Sisi at the award ceremony.

Xie Siquan also became the second athlete to win the men's 3-meter springboard "double champion" in a single Olympics after Xiong Ni, the "prince of diving".

Xie Siquan suffered a serious ankle fracture in 2014. Two steel nails and a rivet were implanted in the wound.

The doctor had warned him that he could no longer practice diving.

However, he refused to surrender to fate.

In Tokyo, Wang Zongyuan, who played in the Olympics for the first time, and Xie Siyu won the men's doubles gold medal in the 3-meter springboard. This was the only event that the Chinese diving "dream team" missed at the Rio Olympics. Wang Zongyuan and Xie Siyu successfully made up for this regret.

On July 24, Hou Zhihui at the award ceremony.

In the women's 49 kg weightlifting competition at the Tokyo Olympics, Hou Zhihui won the gold with a total score of 210 kg.

The coach commented on her as "high concentration, good coordination, and an athlete who uses his brain to train."

On August 2, Chinese player Wang Zhouyu at the award ceremony.

The women's 87 kg class is a new class set by the International Lifting Federation in 2018. Wang Zhouyu was promoted from the 76 kg class. Not everyone is willing to gain 10 kg.

On August 2nd, Chinese athlete Li Wenwen celebrated at the women's 87 kg and above weightlifting awards ceremony at the Tokyo Olympics.

Li Wenwen has a cheerful personality and was once popular on the Internet for a small video about sleeping on the floor.

She once said jokingly: "Every fat girl has her own dream."

In the national team full of masters, Li Fabin didn't win the opportunity to participate in the Olympics until recently.

On July 25th, Chen Lijun at the award ceremony.

In the final of the Tokyo Olympics, due to poor snatch performance, Chen Lijun was 11 kilograms behind his Colombian opponent.

But he only used one of the last two clean and jerk opportunities to reverse the comeback and successfully lifted 187 kg, an astonishing 12 kg more than his last attempt.

On July 28, Chinese athlete Shi Zhiyong won the championship in the men's 73 kg final of the Tokyo Olympic weightlifting event.

Won the championship in the men's 73 kg weightlifting competition at the Tokyo Olympics and broke the world record for overall results.

When Shi Zhiyong was 11 years old, he carried a woven bag and went to Ningbo alone to break the world, and later became the men's 69 kg champion of the Rio Olympics.

After the Rio Olympics, the International Lifting Federation adjusted the weightlifting class and he was upgraded to the 73 kg class, but Shi Zhiyong could not be troubled by this.

Beginning in 2018, he has set a world record consecutively, setting the top spot in the 73 kg class.

On July 31, Lu Xiaojun celebrated after winning the men's 81 kg weightlifting finals at the Tokyo Olympics.

Lu Xiaojun is the weightlifter with the most Olympic medals in China, and at the age of 37 he became the oldest Olympic champion in weightlifting history.

This is also his second Olympic gold medal in his life after winning gold in the London Olympics.

Zou Jingyuan's parallel bars strength can be described as one of the best in the current men's gymnastics world.

In the final of the parallel bars of the Tokyo Olympics, his nearly perfect moves did not leave his opponents any chance of surpassing.

On August 2, China Liu Yang competed in the men's gymnastics ring finals at the Tokyo Olympics.

Liu Yang's ring movements are as beautiful as a textbook.

At the Tokyo Olympics, his "king of contempt" by turning his neck on the ring was described by the official Twitter of the International Olympic Committee as: "How can anyone look so cool while competing on the ring!"

On July 30, Chinese contestant Zhu Xueying at the award ceremony.

On August 28, 2021, Zhu Xueying donated her Olympic gold medal and award-winning uniform to Tianjin Sports Museum, becoming the first athlete to donate a gold medal for the Tokyo Olympics.

She said, "It is more meaningful to display Olympic gold medals in a museum than at home. I look forward to more spectators walking into the progress hall, feeling the Olympic spirit, feeling the charm of sports culture, and absorbing the power of forging ahead."

Cui Xiaotong, who has an excellent sense of water, as the lead oarsman at position 4, controlled the paddling rhythm of the four people well.

Cui Xiaotong, who used to practice single oars, only switched to double oars three years ago, but she trained hard and made rapid progress.

She often said, "If you don't torture yourself in training, you will be tortured by your opponents during the game."

As the second rower, Zhang Ling is the power of the whole boat.

As the number one counter oarsman with the highest technical requirements, Chen Yunxia maintained the balance of the entire boat very well.

She changed to rowing after five years of track and field practice, and she has outstanding physical fitness.

The third position oarsman Lu Yang assumes the role of all-around support. On the one hand, he assists the fourth position lead oarsman to control the rhythm.

On August 7, Xu Shixiao (left)/Sun Mengya participated in the award ceremony in the rain.

In the still water women's double rowing finals of the Tokyo Olympics, Xu Shixiao and Sun Mengya partnered together to win the championship with the best performance in the Olympics and won the first Olympic gold medal for the Chinese women's canoeing team.

Xu Shixiao, who became famous as a young man, has experienced injuries, retirement and comeback one after another.

Xu Shixiao said that kayaking is a kind of feeling for her. Although there are losses and lows in the process, these eventually become the driving force for her to move forward.

Sun Mengya, who entered the sports school for only a year, almost gave up the kayaking road because of her father's injury, but she finally persevered.

On August 2, Chinese players Zhong Tianshi (left) and Bao Shanju set off in the women's track cycling race in the Tokyo Olympics.

At the Rio Olympics five years ago, Angel Zhong and Gong Jinjie partnered to win the championship in the event, achieving a "zero" breakthrough in China's cycling Olympic gold medal.

At the Tokyo Olympics, Angel Zhong and Bao Shanju broke the world record of the women's team race held by the Chinese team in 31.804 seconds, and defeated the powerful German team in the final, winning the second bicycle gold medal in Olympic history for the Chinese team.

On July 24, Sun Yiwen celebrated after winning the championship.

At the Tokyo Olympics, Sun Yiwen won the first women's individual gold medal in the history of the Chinese Olympics with a light blow in the final "decisive sword" in overtime. He became the first Chinese fencer to win individual medals in two consecutive Olympic Games. .

On July 30, Malone kissed the gold medal at the award ceremony.

Ma Long is the first men's double slam and grand slam winner in the history of world table tennis.

The Tokyo Olympics has become a stage where Malone continues to refresh history.

On August 2, Chinese player Xu Xin was in the game.

The left hand is straight, and the style of play is unique.

On July 30, at the badminton mixed doubles award ceremony for the Tokyo Olympics, champions Wang Yilyu (left) and Huang Dongping looked down at their gold medals.

Wang Yilu has outstanding physical quality and strong will. He often said: "The most feared thing is that people have no goals, just like salted fish. With a clear goal, happiness will increase."

Huang Dongping often reminds herself: "No matter whether you have gained or not, it is definitely right to pay."