A 74-year-old village doctor in Rangtang, Sichuan: Practicing medicine over the mountains and ridges for 55 years to protect the health of the villagers 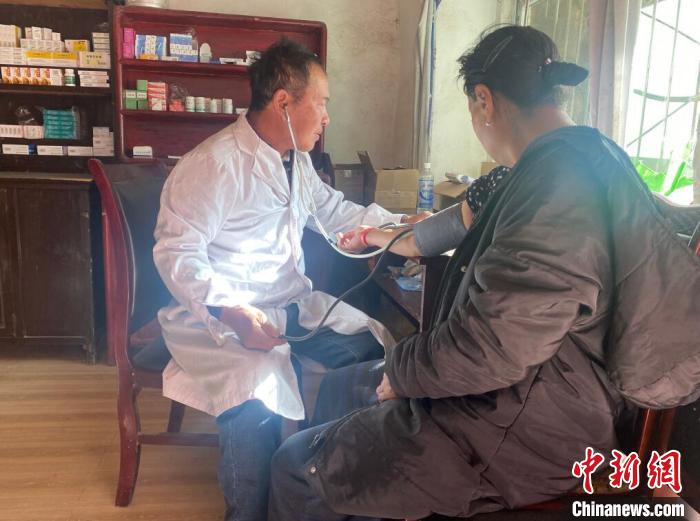 Suo Mugun (left) sees a doctor for the villagers.

China News Service, Yangtang, November 30 (by Zhuo Sijie and Liu Yanlan) "As long as the villagers need it, I will keep going!" A 74-year-old village doctor in Siyuewu Village, Puxi Township, Rangtang County, Aba Prefecture, Sichuan Province Suo Mugun stayed here for a lifetime; at the age of 19, he walked into the village to see a doctor for the villagers, and he worked for 55 years.

From a young man to a white head, from a flourishing prosperity to a dying year, Suo Mugun walked the plateau over the mountains and ridges to consult the herdsmen, and his knees had already fallen to the serious root of the disease, but he still clung to the rural road for medical treatment with a cane.

When I was a teenager, because the village needed a doctor, the village organized the selection of young people to study medical training, and Suo Mugun was selected to participate in the training.

Due to hard work and excellent grades, three outstanding students were selected from the trainees to continue their studies, and Suo Mugun was one of them.

On the way to the township to register, Suo Mugun's heart was intertwined with expectation and hesitation. As a doctor, he yearned for the opportunity to improve himself, but as a child in Siyuewu Village, he kept thinking about before getting on the bus. The village cadres said, "If you leave, there is really no doctor in our village." Because of this sentence, Suo Mugun resolutely stayed and became the only village doctor in Siyuewu Village, and this work lasted 55 years.

Somu visited the doctor on crutches.

In 2004, Suo Mugun became a member of the Communist Party.

Over the past few decades, Suo Mugun has taken root in the most basic-level medical and nursing posts, paying silently, and upholding the health of the villagers in Siyuewu Village.

He said that he can save time when encountering emergency patients. Since then, a motorcycle has been accompanied by Suomu to go out to the clinic, serving the villagers quickly, but his own danger has also increased, and he is on the way to treatment. He can't remember how many times he has fallen.

As a village doctor, it is common to visit doctors day and night.

Suo Mugun, who was reading and studying for a year, heard the villagers say that the neighbor next door was doing funeral for the newborn baby. He immediately put down the book in his hand and hurried to the house to take a look. Seeing that the baby still had a glimmer of hope, he immediately After checking the child and performing a series of operations, the baby miraculously came alive.

"He may be in his 30s now," Suo Mugun said with satisfaction.

"As long as my old man is still useful, I will do my best to help my villagers." Now that he is old, and his knee hurts, Suo Mugun is not as convenient as before, but he is still responsive.

"We have a high mountain and a long road. It is more than 20 kilometers to the town. The common people have a headache and brain fever. It is convenient to get medicine nearby." During the 55-year medical practice, Suo Mugun also gained the trust of the village names. Everyone kindly called He is "Uncle Somu Gun".

Over the past few decades, he has treated countless patients, and he has visited countless times day and night.

For some impoverished patients, no money will be collected.