A journey to yourself: what the film "Coupe No. 6" is about

The show of the drama Coupe No. 6, nominated for the Oscar from Finland, begins in Russian cinemas. The film was co-produced with Russia, Germany and Estonia. The plot revolves around a student from Finland Laura: she gets on the Moscow-Murmansk train, where a simple Russian guy becomes her travel companion. The journey will help the unlikely heroes find common ground and reconsider their attitude to some important things. The main roles in the tape were played by Seydi Haarla and Yura Borisov. 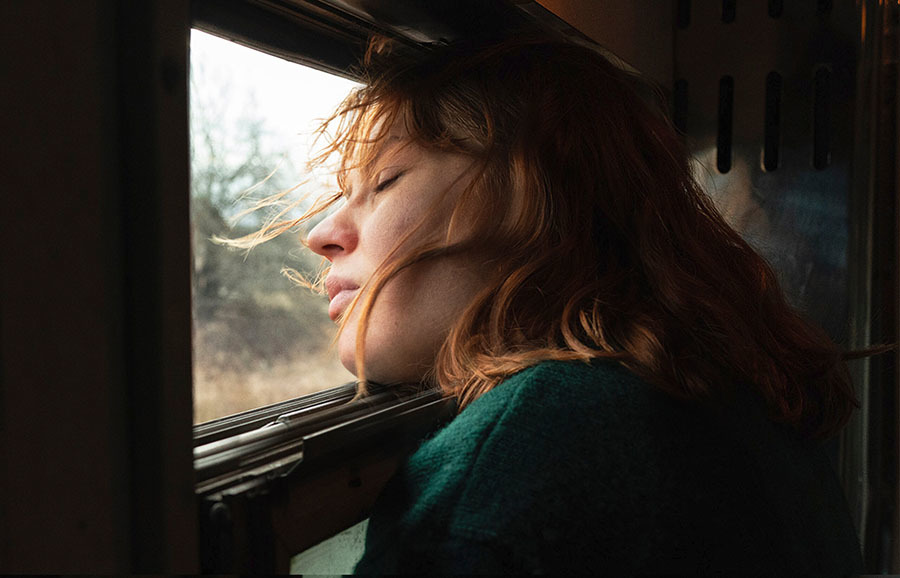 On Thursday, November 25, the drama of the Finnish director Juho Kuosmanen "Coupe No. 6" will be released in Russia. The film, co-produced by Russia, Finland, Estonia and Germany, was presented at the 2021 Cannes Film Festival, where it received two awards. The main roles in the film were played by Seydi Haarla and Yura Borisov. Yulia Aug, Polina Aug, Dinara Drukarova and other artists also starred in "Compartment 6".

Laura, an archeology student from Finland, lives in Moscow with her beloved Irina.

Girls move in bohemian circles, make friends with professors and other representatives of the intelligentsia, discuss Pelevin and ask philosophical questions, including those related to self-knowledge.

Laura and Irina are preparing for a trip to Murmansk to see the petroglyphs, but Irina refuses at the last moment, and the Finnish woman sets off on the journey alone.

The trip is not set from the first minutes.

Laura, suffering from a break with her lover (and soon from the realization that Irina quickly found a replacement for her), finds herself in an old train with a rude conductor and an inoperative toilet tap.

The situation is aggravated by the gloomy view from the window and bad weather, but even more so by the fellow traveler, a simple miner Lyokh performed by Yura Borisov.

Many unpleasant stereotypes are reflected in his image: the viewer is shown a shaved-headed young man with a shoulder strap under his arm, who is always ready to drink vodka - at least to “cheer up”.

Lyokha enters into a dialogue with a neighbor in the compartment, talking in meager terms about the achievements of famous compatriots, and then simply shocks her with his rudeness - he is very straightforwardly interested in whether she is going to Murmansk to offer services of a sexual nature.

At first, Borisov's character looks exaggerated and causes nothing but irritation to the beholder.

However, over time, the viewer sees a gradual transformation of the image: Lyokha, albeit still eccentric, shows new feelings and, on the whole, turns out to be more interesting than it seemed at first glance.

Juho Kuosmanen now and then places the heroes in very specific conditions and situations that force them to step out of their comfort zone.

First of all, this concerns Laura.

She also reconsiders her attitude to some things, but the changes inside her are not so bright and in the current circumstances seem rather predictable.

“Coupe number 6” is a kind of road movie about finding oneself, gloomy at first, and eventually filled with hope.

This thought obsessively speaks about the idea of ​​the whole picture, however, in the course of the development of the plot, it is practically not revealed and as a result it becomes only loud words thrown into the air.

In a sense, the heroes still achieve the goal associated with knowing the past, but this does not allow them to discover new facets in themselves, each other and the world around them.

When interpreting the idea of ​​the picture, a more prosaic version suggests itself: Russia is a country so huge that while you get on an old train from one city to another, you will have time not only to reconsider your attitude to comfort and some aspects of life, but also, in the absence of fish, fall in love with person, it would seem, is not suitable for you at all.

First of all, the film "Coupe No. 6" pleases with a well-thought-out script, on which a whole team of authors worked.

Among them - a scriptwriter from Russia Lyubov Mulmenko, who had a hand in the creation of the films “About Love.

For Adults Only ”and“ Loyalty ”.

Despite the fact that the plot of the picture is uncomplicated, and the action unfolds slowly, thanks to the well-chosen dynamics and a sufficient number of funny situations and witty dialogues, the tape does not "sag" and looks easy and exciting.

Thanks to the same thoughtfulness, there is no desire to accuse the European director of denigrating Russia, although on the screen the outback looks gloomy, sad and stereotyped (but at the same time quite recognizable).

Kuosmanen makes it clear from the first scenes that the country is different, and in other parts of it, life is completely different;

the one from whom you do not expect anything may surprise you, and people behave decently or not too irrespective of nationality, upbringing and level of sophistication.

The scenery looks natural and conveys the atmosphere so familiar to those who happened to travel in Russia by train in the late 1990s and early 2000s.

Both the words and actions of the characters do not leave questions: even if something seems strange, in the general context everything falls into place and reveals the subtlety of the director's intention.

The sober approach of filmmakers to working out the characters and relationships of the main characters cannot but rejoice.

Obviously different, Laura and Lyokha gradually find many points of contact, are imbued with warm feelings and help each other get to know themselves better.

Nevertheless, their adventure does not spill over into an unlikely romantic melodrama, to which at some point the plot seems to begin to move, and ends exactly as it should be in a story that is not devoid of common sense.