Israel begins vaccination of children between 5 and 11 years: "The vaccine is safe and protects children and their parents"

&amp; quot; It didn't hurt. It has been nothing ... We must be vaccinated so that children do not have coronavirus or infect their parents &amp; quot;, said David Bennett as soon as ... 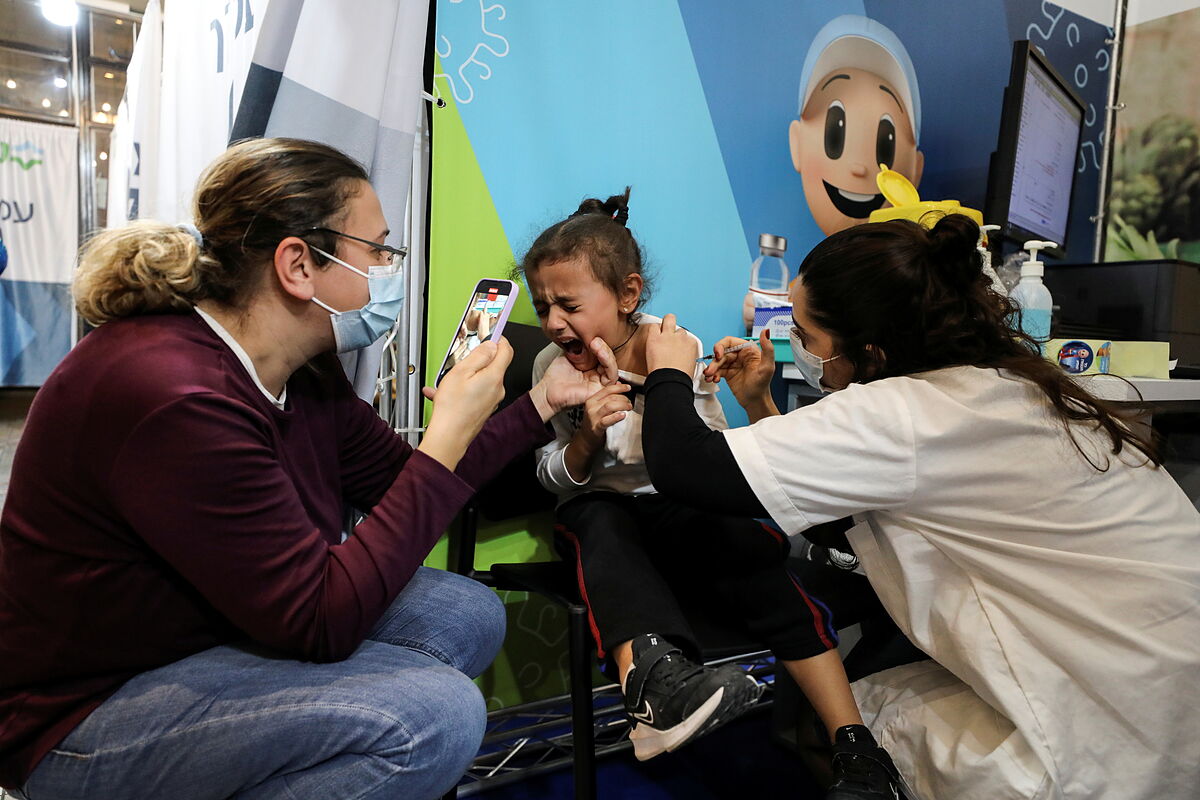 "It has not hurt. It has been nothing .... We must be vaccinated so that children do not have coronavirus or infect their parents," said David Bennett as soon as he was vaccinated by nurse Shirin Samara at the beginning of the campaign focused on children between the ages of 5 and 11 in Israel. Bennett seemed more intimidated by the cameras than by injecting the first dose at the Clalit medical mutual in the city of Herzliya, north of Tel Aviv. At nine years old, the boy knows that it is the media price for being the son of the head of Government, Naftali Bennett.

In the same way that the third vaccine in August in Israel - being a pioneer in the world - contributed decisively to overcome the Delta variant without the need for confinement, Bennett hopes that the inoculation of the smallest is key to avoiding the fifth wave of the virus after the decline in infections has slowed down in recent days while the passage of time has significantly reduced the effectiveness of the immunity of those who have not received the booster dose. An important fact to overcome the initial fears of parents: 55% of new positive cases come from children between 5 and 11 years old.

Beyond serving as a father this morning, Bennett donned the hat of the head of the pandemic management to declare: "I call on all the parents of Israel to come and vaccinate their children. It is safe and protects the children, the parents and the whole country. "

Parents' misgivings are reflected in a response rate of just 3% in the first 24 hours after vaccination of children under 11 years of age. "We understand that at first they have doubts and that with the little ones it will take more time, but I am optimistic since it is only the first day. However, several thousand have come," said the general director of Health, Nahman Ash. According to his really optimistic prognosis, 60% of children of these ages will be vaccinated after all. Of the 9.3 million inhabitants in Israel, 1,237,792 are between the ages of 5 and 11. Among them, 17% were cured of the vaccine.

Fears about the possible effects of the vaccine among the youngest - refuted by Israeli doctors and especially the positive reports of the vaccination of more than two million children of these ages in the United States - and the feeling that the pandemic is a story from the past explains the massive lack of response from parents for now.

55% of the 682 infected on Monday are under 11 years old. It was also the largest daily number since November 1. The percentage of positives on this day was 0.74%. Of the 128 seriously ill patients, 83% were not vaccinated, which the Ministry of Health highlights before the anti-vaccine activists who follow their campaign basically on social networks. 58% of seriously ill patients come from the Arab sector (21% of the population).

Everything indicates that Ash will heed the advice given this Sunday by the commission of experts of the Ministry of Health and will approve, after a cabinet decision, the booster dose to children between 12 and 15 years old five months after receiving the second injection.

On Saturday, a plane from Germany landed at Ben Gurion Airport with almost a million doses of Pfizer specially prepared for children under 11 years of age. For several weeks, Israel has been preparing its vaccination from a medical point of view (especially with health teams specialized in minors) and family and social awareness with messages that try to provide calm and safety to children and especially parents.

"The vaccine is safe, effective and protects children against the coronavirus and its complications, which is the most important thing, and also prevents infection in adults and general disease," said Health Minister Nitzan Horowitz this morning. at the Maccabi medical mutual in central Tel Aviv.

Israel became in the last year a world power in everything that refers to the fight against COVID-19 and especially vaccination thanks to an agreement with Pfizer (it received more vaccines and before anyone else in exchange for becoming a a kind of world laboratory for pharmaceuticals), the massive citizen response, the immediate closure of the airspace, the geographical location and the rapid and efficient work of the public health system including the four large mutual insurance companies.

The long shadow, distant but real at the moment, of a new wave of the pandemic now makes childhood vaccination a key factor.

Especially a few days before the Jewish holiday of

, in which numerous social events and musical performances are held for the little ones, and weeks after the gradual return of tourists to which thousands of pilgrims could be added to the Holy Land on the occasion of Christmas .

Covid-19Vaccination, the firewall that reduces the possibility of contagion by half

Covid-19 RNA vaccines are chosen for booster punctures against coronavirus

CovidWho will receive the third dose, when and with what vaccine against the coronavirus