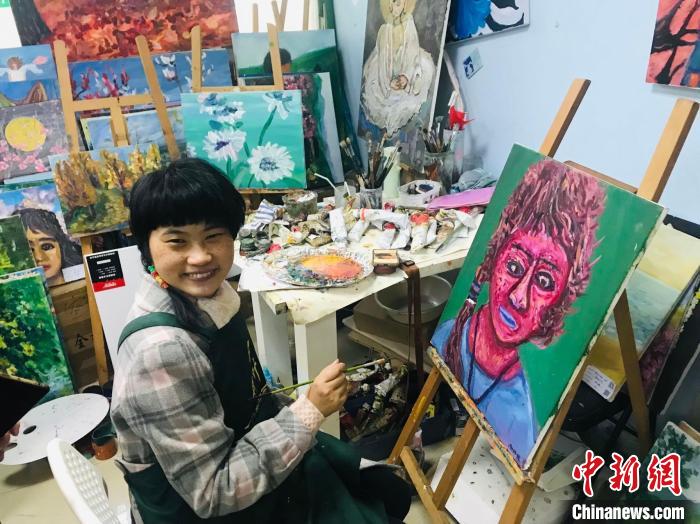 Rose-red skin, blue lips, small freckles scattered on the cheeks, some tousled short hair and a small braid tied up with multi-colored rubber bands... This is a self-portrait with bold colors and clear composition. The owner is 33-year-old Xie Xinxin, a patient with cerebral palsy who has a talent for drawing.

Recently, the reporter met Xie Xinxin at the Wucai Dream Special Children’s Art Rehabilitation Center located in Qingyang District, Chengdu. This rehabilitation center is also known as the Wucai Dream Studio, which provides people with mental disabilities to express their inner emotions through painting, opening and closing. The platform of the heart gate.

Xie Xinxin and her self-portrait.

Xie Xinxin, with a unique hairstyle, sits in a corner of the studio, carefully sketching a portrait of a person, while her mother Xu Yujiang is accompanying her daughter, discussing the details of the painting with her from time to time.

When talking about why the color of the self-portrait is so different, Xie Xinxin smiled innocently and said in vague words, the same reason as she kept the pigtail, "This is the feeling of art, I want to be more special."

Xu Yujiang told reporters that her daughter was born with cerebral palsy due to dystocia, but when she was a child, Xie Xinxin gradually showed her talent for painting, and painting became her way of communicating with the outside world.

After retiring, Xu Yujiang decided to accompany her daughter to go further on the road of painting.

Looking at her daughter who is becoming more cheerful due to painting, she thought that if it can lead more mentally handicapped people to grow together, it must be a very meaningful thing.

For more than 8 years, Xu Yujiang has become a full-time volunteer in the studio. While accompanying her daughter, she also uses her passion to help more people with mental disabilities as much as she can.

"Although many students are not young anymore, their minds are still in their childhood. In my opinion, they are just a group of lovely children, showing abundant emotions with paintbrushes."

The colorful dream painting room is full of mentally handicapped people who come to paint.

According to Wang Hui, the person in charge of Chengdu Xinye Disabled Charity Service Center, as of now, there are more than 100 mentally handicapped people such as autistic patients, Down syndrome patients, and cerebral palsy patients. Tens of thousands of people.

"Art rehabilitation can alleviate the mentally handicapped people's situation, but also help them communicate with the outside world and integrate into society." Wang Hui said that the studio will also sell the students' paintings for public welfare, so that they can also be able to gradually recover. Reap economic subsidies.

Xie Xinxin who is painting.

From being ignorant of painting to now becoming half an "expert", Xu Yujiang admitted that he is very grateful for the art form of painting.

"Children like my daughter are actually a little out of tune with society, but painting has built a bridge between her and the outside world." Xu Yujiang said with emotion, "If my daughter doesn't draw these things, even my mother won't know her. With such a rich inner world, in fact, all mentally handicapped people are the same and need a channel to communicate with the outside world."

Paintings by people with mental disabilities.

The 26-year-old Li Changran is a mentally handicapped person. His paintings have not only green trees and blue sky, high-speed rail planes and other elements, but also his favorite game "Plants vs. Zombies."

“When I’m in a bad mood, I’ll be in a better mood when I paint. The happiest thing is that there will be many volunteers to accompany us to interact.” Li Changran, who has been painting in the studio for 8 years, has a deep affection for this place. .

He said that in the past, he was lonely and bored at home. After he came to the studio, he met many friends, "I have changed a lot."

Holding the paintbrush with an imperfect hand, Xie Xinxin is quietly immersed in the world of painting, holding her cheek to think from time to time, and then fine-tuning the outline of the figure in the painting.

Although it takes at least one month to complete a painting, Xie Xinxin still insists on painting day after day, although the physical inconvenience causes the painting to be very tired for a while.

Nowadays, she has "small reputation", has won some painting awards, and has held a charity solo exhibition.

"My dream is to become a painter, a real artist, and let more people see my paintings." (End)