There is a before and after the pandemic in the publishing sector, and not only because in Spain in 2021 the highest number of books in the last decade is being sold. The... 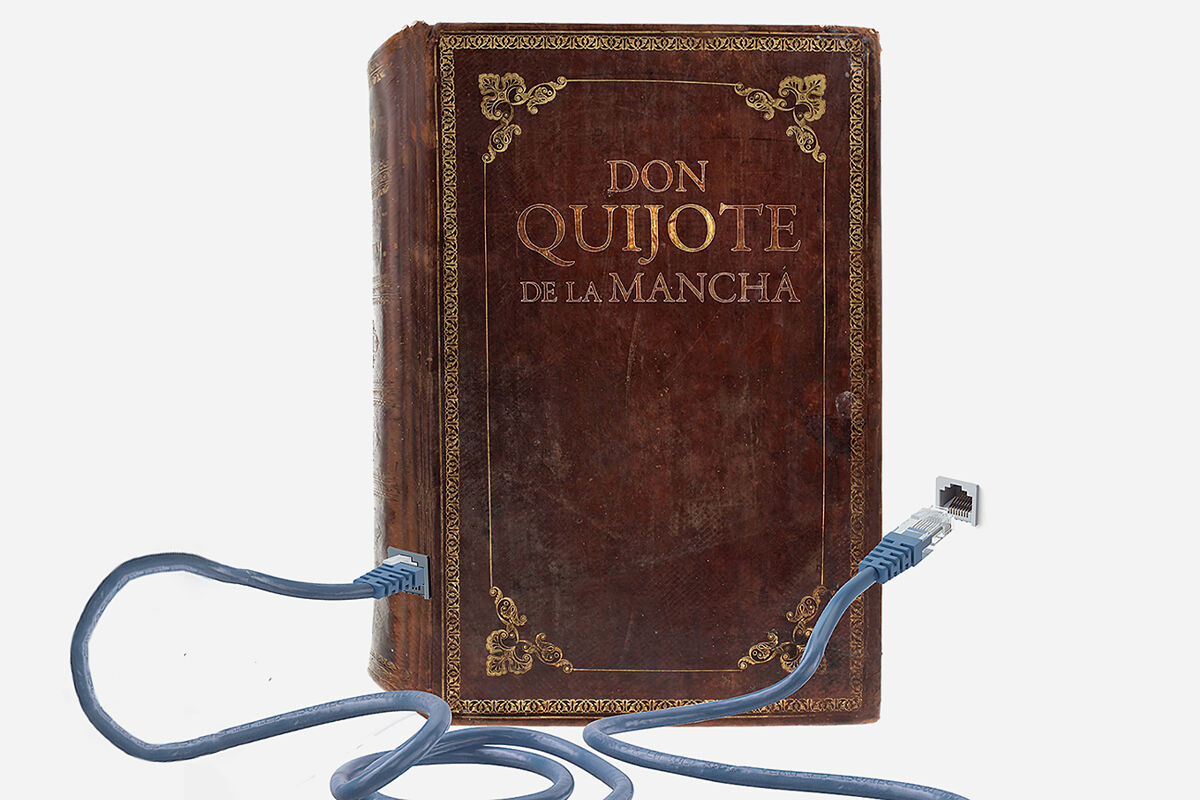 There is a before and after the pandemic in the publishing sector, and not only because in Spain in 2021 the highest number of books in the last decade is being sold. The confinement was an accelerator:

and, as the consultant Rüdiger Wischenbart pointed out in the last Forum Edita, something as unthinkable as subscription services (pay monthly for access to books and audiobooks) is here to stay. Not only in the Nordic countries, but also in Spain and Latin America.

The possibility of something similar to a

is still viewed with logical suspicion in the sector, but as Eva Congil, general director of Anagrama, points out, it is a way of consuming entertainment that is being implemented (everyone today subscribes to platforms music, series and movies) and

"to say that this is not going to happen with the book would be strange and surely innocent," he

explains. "The key is in what market share," he adds. In other words:

in that field: the leader, Grupo Planeta, and Penguin Random House Grupo Editorial (PRHGE). Together they account for 67.36% of the adult fiction market in Spain according to the GFK consultancy, two out of every three books sold. In terms of subscription formats, both have opted for diametrically opposite strategies.

Let's start with PRHGE, the conglomerate to which Plaza & Janés, Alfaguara or Ediciones Salamandra belong. In January 2020,

the group removed more than 1,000 books in English from its subscription services such

as Storytel, Bookbeat, and Nextory. The measure also affected 500 titles in Spanish that Storytel hosted. The decision not to participate in subscription models (a flat rate with unlimited access to thousands of titles) responds to different reasons. "It is in the best interest of the literary ecosystem and to maintain the availability of a wide and varied range of content in the long term. But above all, we have made this decision to preserve the real and perceived value of our content and the intellectual property of our authors. ", explains Carmen Ospina, Director of Business Development at PRHGE.

Unlimited access services "reduce the overall revenue and profitability of our authors and agents," he

"This year we launched our own e-commerce, penguinlibros.com, where we sell, among other things, our audiobooks. But our digital catalog is also available on all channels that operate under a unit download model:

The group has the largest catalog of audiobooks:

"Our commitment to this format is strong not only because the business opportunity is there but because we believe that our books should be available in all possible formats. We have our own studios in Madrid, Mexico, Los Angeles and Argentina, and a team of 12 producers dedicated to producing with the best quality in the market ".

Among the group's plans is to produce about 1,800 more audiobooks during 2022.

In the Planeta Group, on the other hand, they continue to bet on the subscription format. The Spanish publishing giant, which includes labels such as Tusquets, Seix Barral or Destino, was a

pioneer in launching its own platform, Nubico, in 2013. It was presented in society as "the Spotify of books"

, an alliance between Círculo de Readers and Telefónica, which last June was absorbed by Nextory, where they have already migrated their content. Nubico subscribers now have access to a catalog of

300,000 titles and the strategy has allowed Planeta to reach countries such as Finland, Denmark, Germany, Austria, Switzerland, the Netherlands and Norway.

Santos Palazzi, General Director of the group's Mass Market & Digital Area, explains that the sale of Nubico was made to "gain more dimension" and

"scale in an international presence, make our books cross borders".

Getting rid of Nubico will allow Planeta to focus on its specialty, which is generating content. "Our

is not the development of technological platforms," ​​he admits.

The amount that Nextory paid for Nubico is a low key secret, but no one is aware that, regardless of the Spanish readership that may be in Finland,

Latin America is the next "battlefield."

"There are millions of readers there and the day Nextory steps foot, we will be in a very advanced position with them," Palazzi explains.

The library infrastructure and territorial communications are complex in many countries of the Latin American continent.

"There is not a city in Spain that does not have a bookstore. On the other hand, in Colombia the total number of bookstores is 200,"

explains the Planeta manager. "In Colombia, the digital will make reading reach many places where it does not reach now." Mexico, with 132 million inhabitants, Colombia with 50 million and Argentina with 47, constitute a huge potential audience.

"The rates will have to seduce, because the ten euros that we pay in Europe for Nextory there are not available to everyone. It is something that Netflix and HBO have experienced before,

with a pricing policy that is adapted to each country."

Despite the agreement with Nextory, Planeta continues to sell its books on many other platforms such as Storytel, Kobo, Google Play or iBooks. "We marry everyone because our aim is that our content reaches the maximum number of listeners and readers possible, we do not like to grant exclusives," says Palazzi. "

. The combination of offer and subscription prices, that is, personalization, is the challenge that platforms that wish to integrate different contents ".

Planeta Audio plans to close 2021 with a catalog of more than 2,000 titles in Spain and Latin America,

of which about 500 have been produced this past year.

All of them are produced in about thirty external studies.

Audiobook listening platforms have experienced a boom in recent months in Spain.

A phenomenon that has quite a bubble.

With the size of the market we have today, there is no space or business for six or seven platforms," ​​says Palazzi.

What remains to be seen is which two or three will survive.

"Those who have more patience, better content and resources to invest in the long term, because this is a long-distance race," he predicts.

It is not easy for a medium or small publisher to record audiobooks. It requires time, investment and a first-rate technological bet, so many platforms are assuming the production costs because they need content with which to attract new subscribers.

Congil believes that in the middle of the square there will be a "hybrid" model, of coexistence between both options.

"If the market share goes very high towards subscription models, then the sector will undergo an enormous transformation, like the one that music has experienced. It will not be able to be sustained as it is now," he warns.

The comparison with Spotify, a profoundly unfair model of artist pay, is scary. It should also be added that the situation in both sectors could not be more different: the book enjoys iron health, while

Spotify became strong after landing in a dying sector where piracy had devastated the physical format.

Despite the disparity of contexts, the fear of changing the model exists. "It is very difficult to maintain a reasonable income for authors in a subscription model. That is the great challenge.

If the subscription platforms do not pay more, it is very difficult for the publisher and the author to continue doing their work.

. They will end up generating their own content, like Netflix, "predicts the director of Anagrama. Storytel, in fact, already has its own content creation line." It is a very interesting moment, "summarizes Congil.

. Storytel was founded in 2005 and was on the verge of bankruptcy until it began to emerge in the middle of the last decade. It has expanded throughout the Nordic countries and in recent years has undertaken a policy of purchasing publishing stamps:

in 2016 it acquired the second Swedish publishing group for 18 million euros (Norstedts Förlags, founded in the 19th century

, where they publish Stieg Larrsson, Astrid Lingren and most Nobel laureates). In Denmark and Finland it has also become strong, absorbing its main competitor in audiobooks (Mofibo) and several publishers. His arrival has been noted:

The truth is that the trend is unstoppable: the income derived from the sale of ebooks and audiobooks has increased by 113% in 2020 compared to the previous year, according to the latest Bookwire report, prepared with data from 840 publishing labels from Spain and Latin America. According to the consultancy, in 2021 the sector will experience a growth of between 25% and 30% in the sales of audiobooks.

Subscription platforms like Storytel, Audible, Scribd, Kobo, and Podimo are the main avenue of commercialization for audiobooks

. Unit sales channels such as Google Play or Apple Books are in second place, and

as Spotify and Deezer are

the unit sales channel represented 75% of total sales in 2020. Although it is still the dominant sales model in the world of

, it has been losing share to the detriment of subscription platforms, which do not stop growing: they represent 19% of total

grew 145% in economic value compared to the previous year.

Digital readers are large consumers, with an average of 12.8 readings per year,

more than double the reading rates for paper books, which stands at 9.7 books per year, according to the latest study by the Federation of Publishers Guilds of Spain.

However, during the months of total confinement, digital consumption quadrupled.

By 2030 the world of audiobooks will represent a $ 20 billion industry.

LiteraturePaloma Sánchez-Garnica, finalist for the Planeta Prize: "We need a free society, capable of standing up to power"

LiteratureThe diaries of Rafael Chirbes: "The symptoms that led me to a suicide attempt in adolescence have returned"

LiteratureBloodless crimes and amateur detectives ... why does cozy crime triumph?