Three generations of border guards from a family in Wenshan, Yunnan on the Sino-Vietnamese border: keeping the side well is keeping the home

China News Service, Wenshan, November 10, title: Three generations of border guards from a family in Wenshan, Yunnan on the Sino-Vietnamese border: keeping the side well is keeping the home   China News Service reporter Han Shuinan   In the early winter, rain and fog increased in Luojiaping Village, Wenshan Prefecture, Yunnan Province, which is located on the border between China and Vietnam. 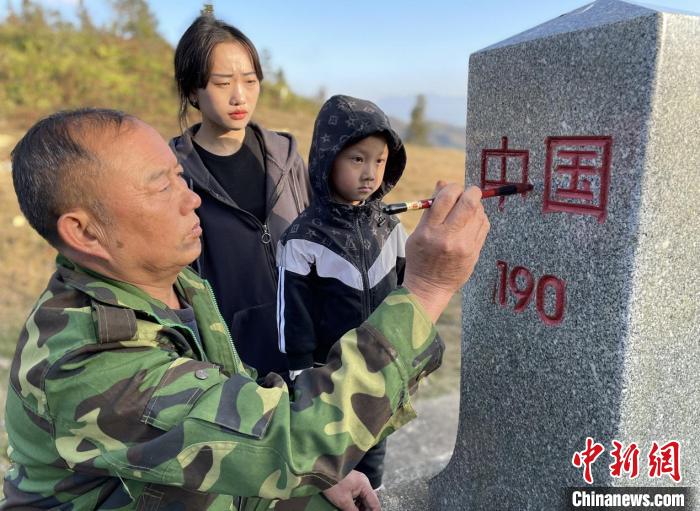 China News Service, Wenshan, November 10, title: Three generations of border guards from a family in Wenshan, Yunnan on the Sino-Vietnamese border: keeping the side well is keeping the home

In the early winter, rain and fog increased in Luojiaping Village, Wenshan Prefecture, Yunnan Province, which is located on the border between China and Vietnam.

Villager Xiong Guangze led several villagers on patrols along the border. Even in the fog, he could always find the direction accurately.

Luojiaping Village, where Xiong Guangze is located, is a Miao village, only about 1 km away from the border.

Counting from Xiong Guangze's grandmother, he is already the third-generation lineman in the village.

When he was a child, Xiong Guangze followed his grandmother and father on patrols along the border, and grew up listening to the stories of his grandparents.

"My grandma's name is Xiang Zuo brother. She joined the Chinese Communist Party in 1950 and was the first female Miao Party member in our town." Xiong Guangze proudly introduced.

Because Xiang Zuo brother is familiar with the borderline situation, she has become a border guard since the 1950s, leading the Miao people in Luojiaping Village to guard the border.

Xiong Guangze's father, Xiong Bingqing, has also been involved in the sidelines for a long time.

In September 1980, Xiong Bingqing discovered the enemy's situation while going up the mountain to collect medicine, and promptly reported to the garrison troops.

"When I was a child, I didn't quite understand the meaning of boundary markers and border lines." Xiong Guangze said. After growing up, he gradually understood his father's saying that "a country has a home, and a good side is a good home."

Xiong Guangze told the story of his grandmother guarding the boundary monument.

In the 1970s, the boundary markers along the border were often moved or even destroyed by people from neighboring countries.

After the death of his grandmother and father one after another, Xiong Guangze did not hesitate to inherit the responsibility of his grandparents.

After the outbreak of the new crown pneumonia in 2020, Xiong Guangze led villagers to patrol along the border more frequently.

Nowadays, in the critical period of strong border defense and epidemic prevention and control, Xiong Guangze still organizes villagers to patrol and stays at the stuck point 24 hours a day, once again becoming a pioneer guarding the country.

For the 59-year-old Xiong Guangze, every side tour is a test of perseverance, but he can be seen on the road every day.

Ma Xian, a villager in Luojiaping Village, said that in May of this year, Xiong Guangze accidentally broke many fractures during a patrol, but after only more than a month in the hospital, he had not fully recovered, and he was hobbled and busy in the sight of the villagers. Get up and stick to your post.

Xiong Guangze is a defender and a village cadre in Luojiaping Village.

Over the years, while leading the villagers to guard the borders of the motherland, he is also building a beautiful hometown with the villagers.

"In the past few years, relying on the development of Chinese herbal medicine planting and breeding, the villagers’ annual per capita income has exceeded 10,000 yuan. The development of the industry has also attracted many young people who originally went out to work in the village to return to the village. Strength." Xiong Guangze introduced that Luojiaping Village was successively rated as “State-level National Unity Demonstration Village”, “Provincial-level Civilized Village”, and “Ping An Village”. In 2017, Luojiaping Village was listed as a Chinese minority by the National Civil Affairs Commission. Characteristic villages.

Today, Xiong Guangze will take his grandson on border patrols with him after school.