Behind the cash register of the supermarket is a whole cabinet full of shelves with tobacco packages. Liu, the veteran clerk, says they sell more than 60 ... 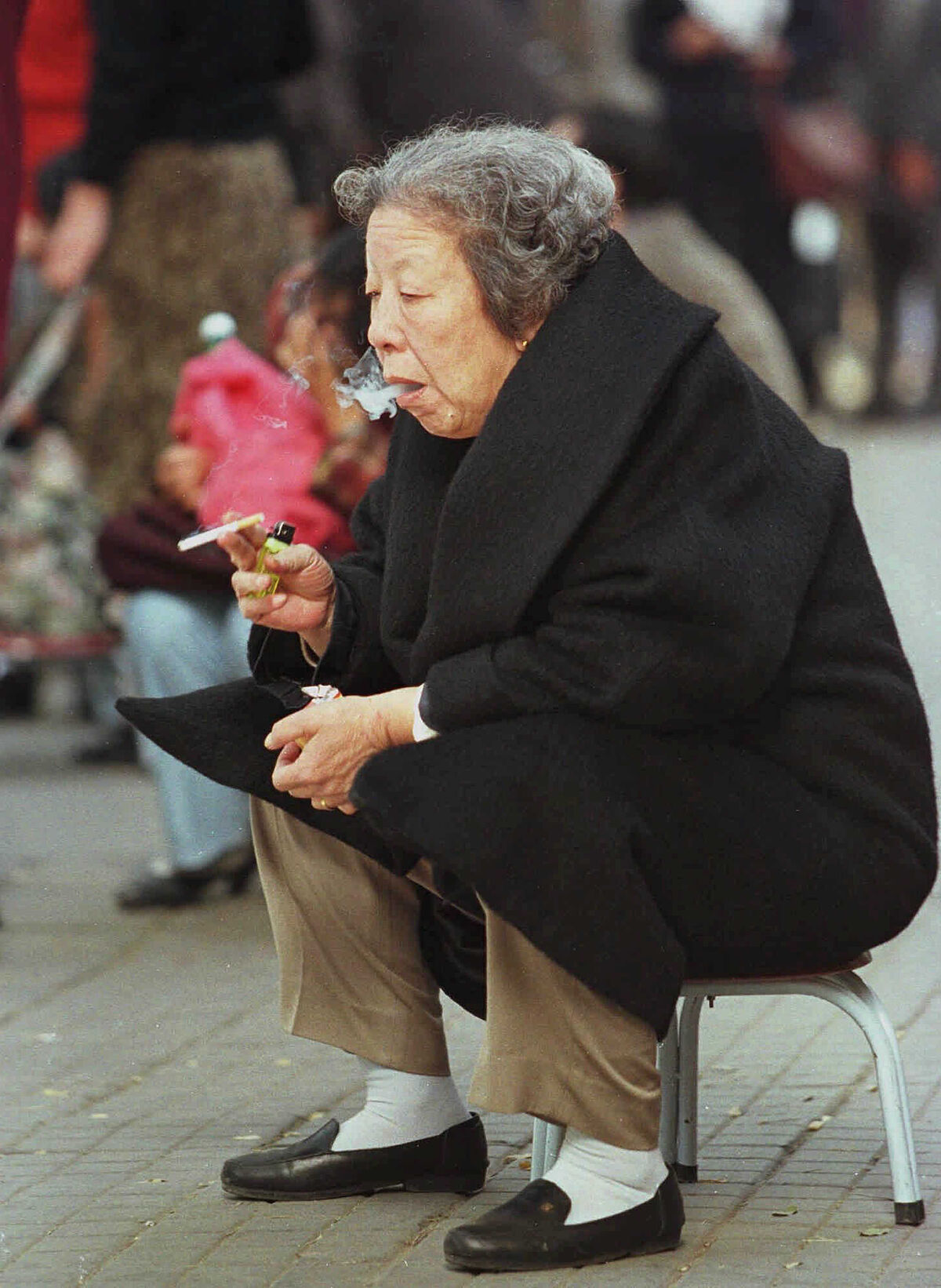 Behind the cash register of the supermarket is a whole cabinet full of shelves with tobacco packages. Liu, the veteran shop assistant, says they sell

. A collector's paradise because they come in all colors and shapes. From a crimson red one with a picture of the Mao Zedong mausoleum in Tiananmen Square, to a pistachio green one with a photograph of two pandas eating bamboo.

The cheapest costs 6 yuan (0.80 cents to change). The most expensive, 180 yuan (24 euros). "If someone has a business dinner or a party giving cigarettes, they usually buy more expensive packages to appear good purchasing power," explains Liu. "They are absurd men's things. Some think that smoking a luxury brand means that they are successful in life," adds Tong, a young woman from Beijing who buys very thin and long cigarettes that cost 14 yuan (1.90 euros).

"Tobacco is still very cheap in China because

if prices rise, the millions of smokers who exist would protest

, especially men from the poorest regions, who continue to associate smoking as something manly, with masculine power. For example, my father , who is from a small town on the east coast, would never publicly complain about a government measure that he does not like. But if they raise the price of the packet of cigarettes he buys, he would always be the first to speak out, "says Tong.

almost 350 million smokers who consume 40 % of the world's tobacco

, of which one million dies every year in the Asian country.

In addition, there are 700 million people exposed to tobacco smoke every day, of which 100,000 die annually.

In that age group, more than half of the men smoke.

The Chinese government set out in 2016 to

through increased taxes, education and a ban on smoking indoors.

Although you only need to spend one night in some restaurants and bars in cities like Beijing to verify that you are still compulsive smoking indoors.

Among the measures of the Chinese authorities is not yet - nor is it expected - an authorization of electronic cigarettes that can help to quit for adult smokers, as approved in October by the Food and Drug Administration (FDA) of the United States.

Vaping products are not as successful in China yet, despite its vast manufacturing industry in Shenzhen, employing millions of people and

exporting nearly $ 8 billion worth of e-cigarettes in 2020

. A report on the global state of tobacco harm reduction estimates that there are only 7.7 million vaping users in China, 0.6% of the population, significantly fewer than that of traditional tobacco smokers. Even so, from Beijing they warned in March that

they would soon regulate these cigarettes

that are not currently under the control of the state tobacco monopoly.

the rate is falling too slowly

. This points the last few days ago published study in the journal

reviewed, which has been developed by scientists at the Chinese Academy of Medical Sciences.

"Tighter tobacco control is crucial for China to reduce a rising tide of cancer deaths," the researchers said after estimating that

over the next two decades. .

"Unless widespread efforts are made by families, communities, and society as a whole to support smoking cessation, the huge loss of life for the working-age population over the next 20 years will undoubtedly add to the burden. increasing difficulty in supporting aging Chinese society, "continue Chinese scientists.

The researchers projected that the smoking-related cancer death rate from

, with an excess of 8.6 million deaths in 20 years. "Lung, liver, stomach and esophagus cancers are among the 10 types causally related to smoking analyzed," they say.

After these figures that leave a worrying situation, the question comes: is there the will in China to quit smoking?

with a high number of heavy smokers," Xiao Lin, deputy director of the Bureau of Tobacco Control at the Chinese Center for Disease Control (CDC).

According to a survey of Chinese adults in 2018, the overall and daily smoking cessation rates in China were 20.1%.

Only 16.1% of smokers said they planned to quit within 12 months.

"Many people do not think of tobacco addiction as a disease, but nicotine addiction has been listed as such by the WHO," said Cui Xiaobo, deputy director of the Beijing Tobacco Control Association. Experts suggested that the government improve its system of smoking cessation services and include drugs to help with smoking in the health insurance program.

"While some cities have already passed laws banning smoking indoors, in public spaces and workplaces, more action is needed. China needs a national smoke-free law to protect all citizens from deadly exposure to secondhand smoke. A

and its tobacco industry is controlled by the state.

producing 40% of the world's supply of cigarettes

, is overseen by the State Tobacco Monopoly Administration.

"Would you send your child to a school named after a cigarette brand? China's tobacco industry is building schools and no one is watching," says Jennifer Fang, a researcher at the Simon University School of Health Sciences. Fraser (Canada), who was touring some provinces in China investigating the connection between tobacco companies and schools.

"It is difficult to predict exact numbers, but reports suggest that

there are more than 100 tobacco-sponsored schools

"Many of these schools were built after the devastating Sichuan earthquake in 2008. However, the tobacco industry did not stop there. The company often sponsors school supplies, libraries and scholarships for students."

Covid-19 The 200,000 Chinese blood samples that 'hide' the origin of the coronavirus pandemic