China News Service, Guangzhou, October 27 (Reporter Jingwei Cheng) On the evening of October 26, the Beijing 2022 Winter Olympics medal "Concentric" was released. The front of the medal adopts a circular ring shape, which is treated with a depression, which is inspired by the traditional string pattern jade bi, with a shallow decorative pattern engraved on it. The reporter learned from the Guang 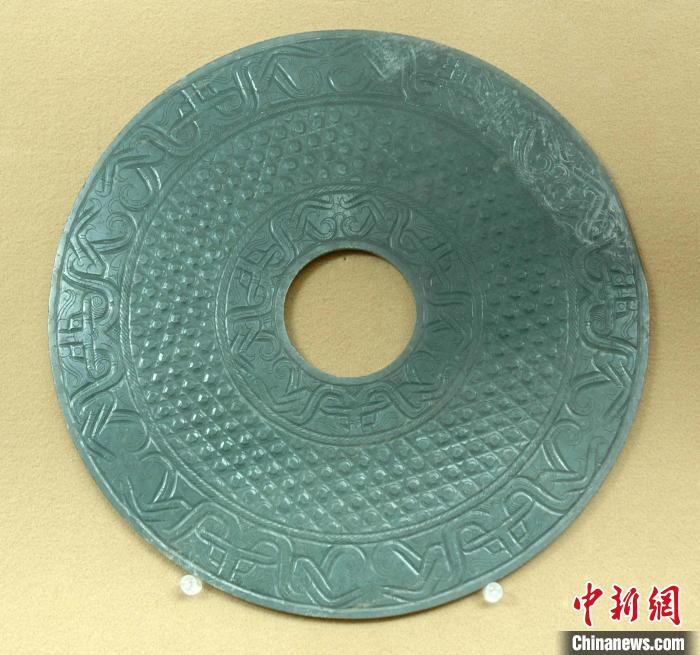 The front of the medal adopts a circular ring shape, which is treated with a depression, which is inspired by the traditional string pattern jade bi, with a shallow decorative pattern engraved on it.

The reporter learned from the Guangzhou Nanyue King Museum on the 27th that according to the official announcement, the design of the medal refers to the jade bib with concentric circles unearthed from the tomb of the Nanyue King.

In the media-produced "Concentric" medal picture and the Beijing Winter Olympics medal propaganda film, there are pictures of jade bii with concentric circles in the tomb of the Nanyue King in Guangzhou.

And in the long picture of "One Picture to Understand the Beijing Winter Olympics and Paralympics Medals Look Like" produced by the media, it is specially marked "The visual source of decorative patterns: Guangzhou Nanyue King Tomb Concentric Circle Pattern Jade Bi (Western Han Dynasty)", next to it A picture of a jade bi is also attached.

Photo courtesy of the D54 jade wall unearthed from the Tomb of the Nanyue King, Nanyue King Museum

According to data records, the outer diameter of D54 jade wall is 28.1 cm, the inner diameter is 6.2 cm, and the thickness is 0.6-0.8 cm. The texture and color are sapphire and dark green. In terms of decoration, the outer area is 6 dragons, the middle area is swirly, and the inner diameter is 6.2 cm. The area is 3 dragons; the unearthed location is the "head box" of the main coffin chamber; some of the edges are not polished.

The "Report on the Excavation of the Tomb of the Nanyue Kings" also recorded: "...There is also a piece of D54. There is also a corner in the outer area that is not polished and cuts are exposed." The excavation report also attached a picture and rubbing of the D54 jade bi.

The relevant person in charge of the Nanyue King Museum told reporters that a total of 5 pieces of jade bibs from three areas like D54 were found in the tomb of the Nanyue King, which is extremely rare in the Han tombs of the same period.

The tomb of the King of Nanyue was discovered in 1983. It is the tomb of the second-generation king of the Nanyue Kingdom, Zhao Xuan. Set) The cultural relics are well preserved, including 71 jade bibs.

The relevant person in charge of the Nanyue King Museum pointed out that the carving techniques and patterns of these jade bibs basically cover the published jade bibs of the Han Dynasty, and the unearthed location is clear and the combination relationship is clear.

The jade pendant of the martyr group in the front room of the Nanyue King’s tomb includes 3 jade bibs; the jade pendant of the martyred group in the east ear room includes 1 jade bib; 6 jade bibs are found in the west ear room, and another 5 glazed glass bibs are found in the main coffin room. A total of 49 jade bibs were unearthed, including 1 jade garment on the left eye, 10 on the jade garment body, 5 on the underside of the jade garment, 14 on the inside of the jade garment, 3 pieces on the right side of the inner coffin and 3 jade pieces on the left side. In contrast, 7 pieces are stacked on the lacquer box with pearls in the head box, 2 large jade pieces are placed under the 149 pieces of pottery bii in the foot box, 1 openwork chain bii is under the jade shoe cover, and 4 pieces are around the coffin. A large jade bii, and two jade bibs are included in the jade pendant of the master group of the tomb; the east side room is the place where the lady was buried. Seven groups of jade pendants, including 12 jade bibs, were found in the east side room; 1 jade bii was found in the west side room.

From the perspective of carving techniques, the tomb of the Nanyue King can be divided into two main categories: one is the traditional round jade, with a round hole in the middle, and the two sides of the wall are inscribed or bas-relief decorated; the other is the outgoing jade. Bi, this type of jade bi is open-carved or engraved on the bi-face, and the inner hole or outer edge is open-carved and attached.

From the perspective of ornamental shapes, these two types of jade have different types.

Jade bi is a kind of jade that originated earlier and lasted longer among the jade rituals.

"Liu Qi" refers to Bi, Cong, Gui, Zhang, Hu, and Huang, and stipulates that "Cangbi is used to greet the sky."

It can be seen that the jade bi is an important jade ritual vessel in the pre-Qin period.

The jade bib in the pre-Qin period was mainly used as a sacrificial ritual.

The jade bibs unearthed from the tombs of the princes and kings of the Western Han Dynasty were mostly used as jade for burial. This is inseparable from the idea that "precious jade" was inherited by the Han people in the pre-Qin period and believed that jade can be preserved.

In addition, the number of jade bibs unearthed from the tombs of the princes and kings was large and covered around the body of the tomb owner in a certain combination. Therefore, the jade bib was also an important part of the burial jade in the Han Dynasty.

The relevant person in charge of the Museum of the Nanyue King pointed out that the jade bibs unearthed from the tomb of the Nanyue King embody the Chinese nation's concept of "taking jade as precious and having jade for security".

This time, the Jade Bi from the Tomb of the King of Nanyue became the creative source of medals for the Beijing Winter Olympics, demonstrating the contribution of Lingnan culture in the pluralistic integration of Chinese civilization.

The concentric circle shape and auspicious decorations of Jade Bi embody the spirit of "Winter Olympic glory, shared by the whole world" of the Winter Olympics.