The murder of the popular rapper Nils Einár Grönberg has triggered intense rumors on social media. Speculations and serious criminal allegations against both Einár and other named persons take turns, even on the deceased's own channels, which are now completely unregulated. - It is enormous accusations that are spread, says Caspar Opitz, the public media ombudsman. 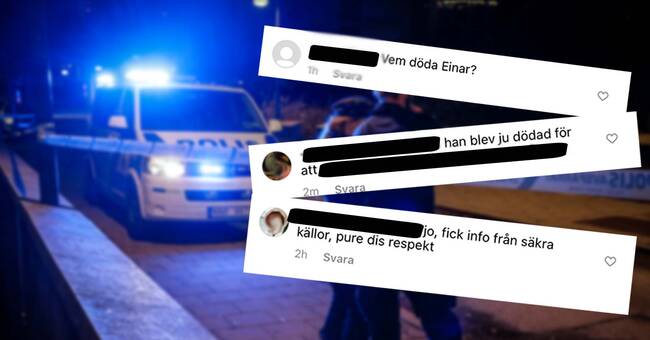 After the murder of the rapper Einár, rumors have flourished, with serious criminal charges against both the deceased rapper and other named people.

- It is speculation about artists or gangs that may have been involved in the murder, says music journalist Johannes Cakar and reminds that celebrity gossip is in the nature of the internet.

Fills a void - with varying quality

Johannes Cakar sees a broad information landscape about hip hop that has grown out of a vacuum, when traditional media have failed to cover the popular genre.

He emphasizes that the differences between different players in the market are large.

- There are serious players like Rappnyheter who are formal and informative.

But also quite large Instagram accounts where people make point systems of gang crime: they have rival gangs and update news about who shot whom.

The tradition comes from the United States, he says.

He likens the development in the hip-hop genre to a kind of reality show that makes it twist in the stomach.

In the video above you can hear why.

From the great earth, speculation about motives and perpetrators spreads rapidly, as far as comment fields on the deceased's own channels, which are now completely unregulated.

- On the one hand, we have a crime victim here and a family that you have to show consideration for, but I have also seen people who are singled out in different ways as involved or responsible.

It is an incredible accusation to be singled out for such a serious crime, says Caspar Opitz, the public media ombudsman.

Caspar Opitz says that today there is no system for reviewing or reporting channels that are not connected to the media ethics system.

The possibility that exists in, for example, criminal charges is to report defamation.

But it is a complicated legal process, and often the accusations come from anonymous senders.

He believes that the situation with Einár once again highlights the lack of control that exists on the major platforms such as Instagram, Twitter and Facebook.

- I think there is more to ask of them, absolutely.

It is important that they go in and are active when spreading disinformation or rumors that can harm people.