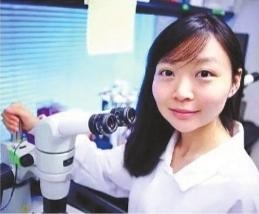 inseparable from this Chinese female scientist

In recent days, a sensational piece of news in the medical field has attracted a lot of attention: the world's first pig kidney transplantation was successful.

The trial started in September.

The researcher who led the experiment said that after transplantation, the pig kidney showed no rejection and started to work "almost immediately".

But it may not be as optimistic as everyone thinks. This study is still very different from the organ transplants that you often hear:

The subject of the experiment was a brain-dead patient. With the consent of his family, he connected the pig kidney to the blood vessel of the patient's thigh and observed it outside the body for 54 hours.

The transplant is not an ordinary pig kidney, but from a genetically modified pig, by knocking out specific genes to reduce human rejection after transplantation.

In short, this "world's first case" is an extremely meaningful exploration, but it is far from reaching the level of clinical application.

"Survival" outside the patient's body for three days

The kidney comes from a genetically edited pig

The patient was brain dead and showed signs of renal insufficiency. She hoped to donate organs during her lifetime, but for some reason, her family agreed to let her receive a pig kidney transplant, which allowed her to contribute to medical research in this way.

Chief surgeon Robert Montgomery said that a sugar molecule called alpha-gal in pig cells can cause human rejection, and the "kidney source" of this operation is a pig that has been genetically modified to remove this sugar molecule. Therefore, the patient did not experience rejection.

Pigs have always been the latest research focus to solve the problem of organ shortages, but there are also some obstacles: the sugar from pig cells is foreign to the human body and will immediately cause organ rejection. This pig was gene-edited by Revavicor. Approved by the FDA as a source of human therapy.

Although the operation did not place the pig's kidney in the position of the human kidney, Montgomery said that after being connected to the patient's blood vessel, the pig kidney normally functions to filter waste and produce urine, and the level of urination is equivalent to that of the transplanted human kidney.

The patient's creatinine level was abnormal before surgery and returned to normal after transplantation, and the creatinine level is one of the indicators to measure whether the kidney function is healthy.

Three days after the transplant operation, the patient's life support equipment was removed on the scheduled date.

Over one million uremia patients in China

Dr. Montgomery said that this operation and previous studies have made it possible for patients with advanced renal failure to receive experimental pig kidney transplantation as early as one or two years.

This may become a short-term solution for critically ill patients with acute kidney source shortage, or even a long-term solution.

Dr. Montgomery himself received a heart transplant three years ago.

He said: "I used to be one of those people. They were lying in the intensive care unit waiting for their organs to be donated. I don't know if they can get them in time."

Research on transplanting animal organs to humans has been underway for a long time.

According to the Associated Press, in the 1980s, a critically ill baby in the United States received a baboon heart transplant and died 21 days after the operation.

According to reports, Chinese researchers are also exploring the possibility of animal organ transplantation.

Zhu Tongyu, director of the Shanghai Key Laboratory of Organ Transplantation and chairman of the Organ Transplantation Branch of the Shanghai Medical Association, said: “In the latest experiment, after transplanting animal organs into humans, it has successfully overcome the inevitable occurrence of xenotransplantation from animals to humans. Hyperacute rejection (within 48 hours), which means that it can be used at least as a short-term transition. The next step is to study accelerated rejection (48 hours-5 days), acute rejection (more than one week) and The impact of chronic rejection."

Zhu Tongyu believes that there is less ethical controversy about organ transplantation trials for brain-dead patients, but whether the trial can be expanded to normal patient groups in the future still needs to obtain more scientific data about the trial.

He cited data that China currently has more than one million patients with uremia.

The latest data show that there are 700,000 registered hemodialysis patients in China, and there is a huge demand for kidney donors.

Scientists believe that in addition to the success of the operation, what is more worth looking forward to is the genetically modified pig. Judging from the current short-term experiments, it seems to have solved the allogeneic rejection that has plagued the medical community for many years.

This means the success of special customized genetically transplanted pigs.

The pigs used in this experiment were genetically engineered by Revivercor, one of the few biotech companies in the United States dedicated to developing pig organs for transplantation into humans.

Currently, this company has more than 100 genetically modified pigs for transplantation trials and other drug research.

However, the realization of this idea is still very complicated. Rejection is on the one hand, and on the other hand is the danger of porcine virus infection.

In 2019, researchers from Harvard University and the biotechnology company eGenesis found a way.

They used a new gene editing technology, called Crispr, commonly known as "gene scissors", to remove potentially harmful viral genes from the pig genome, thus clearing the major difficulties in the use of pig organs for human transplantation.

Yang Luhan, 31, is the co-founder and chief scientist of eGenesis.

She graduated from Peking University with a bachelor's degree in 2008, and then studied as a postdoctoral fellow at Harvard University.

Yang Luhan said: "This technology has removed the biggest safety barrier in this field after the discovery of porcine endogenous retrovirus more than 10 years ago, and has rekindled everyone's confidence in xenotransplantation."

In view of the significance of this achievement, the American "Science" magazine reviewed the manuscript once and published the paper online in advance.

As early as 2018, Forbes Magazine has named her one of the 30 leading figures in the field of medical science under the age of 30 in the world.

Pigs are "heroes" in solving the dilemma of organ transplantation

But ethical issues need to be explored

The organ transplantation technology itself is already very mature, and the difficulty lies in "waiting."

According to data from the "Organ Sharing United Network Organization", a non-profit organization in the United States, there are currently nearly 107,000 people in the United States waiting for an organ transplant, of which more than 90,000 people are waiting for the source of the kidney. It takes an average of 3 to 5 years to wait for the source of the kidney. There are 12 people on the waiting list every day. People can't wait and die.

As a result, people turned their attention to animals.

Except for those crazy attempts long ago, the real scientific exploration of the entry of animal organs into the human body began in the 1960s.

After some scattered research, scientists began to pay attention to the source of animal organs, from early sheep, cows, monkeys, orangutans, and baboons to pigs.

To this day, porcine heart valves are still an important source of valves.

In 1989, the first porcine islet cell transplantation into the human body began an attempt to treat diabetes.

Prior to this, insulin preparation was also derived from porcine islet cells.

Porcine bones and porcine cornea from which live cells have been removed have also been gradually transplanted in the 21st century, which can partially replace the original functions of human organs.

"Pig kidney is the best source of animal kidney transplantation. This is the consensus of the academic community." Zhu Tongyu said that scientists have done a lot of exploration in animal organ transplantation. Primates were once a hot research direction because they have the highest genetic similarity to humans.

But primates have many obstacles as donors.

For example, the number of baboons is too small to meet the needs of organ transplantation; while the weight of monkeys is too light to have enough organs for human use.

Pigs and humans have a high genetic similarity, and the size of their kidneys is similar to that of humans, so they gradually "stand out".

In addition, primates are close relatives of humans and have ethical problems, while pigs are a common food for humans, and there are no ethical problems as organ donors.

However, using humans as transplant recipients for scientific experiments and research has ethical difficulties.

The implementation of animal organ transplantation for brain-dead patients is still relatively controversial in terms of ethics, but will the experiment be expanded to normal patient groups in the future, and can the experiment time be extended to several months or even years?

Zhu Tongyu believes: "With our current strict ethical norms, it is very difficult and may require ethical exploration."

We used to say a word: The whole body of a pig is a treasure!

In addition to food, pigs are also striving to meet human research needs and organ needs, and dedicate themselves to the future of mankind: "The whole body of a pig is indeed a treasure-whether it is in your stomach or in your stomach."