Dutiful son! He resigned as general manager to take care of his dementia and paralyzed father for 12 years (photo) 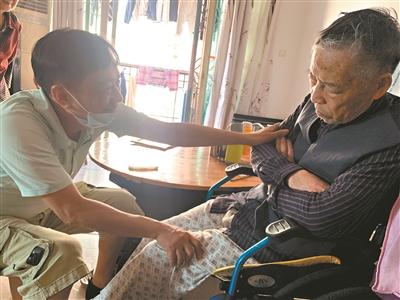 Liu Peiqiang chatted with his father.

Liu Peiqiang wiped the potion on his father's legs and feet.

It is said that the daughter is the father's "intimate quilted jacket".

But for the 84-year-old Liu Shuncai, his 56-year-old son Liu Peiqiang is his "intimate quilted jacket."

After a stroke 12 years ago, Liu Shuncai was paralyzed in bed and also suffering from Alzheimer's disease. He didn't even know his son.

Liu Peiqiang's neighbors gave him thumbs up when they saw him doing the work of peeing and peeing from morning till night.

What is less known is that Liu Peiqiang is also an entrepreneur and collector who runs six catering companies.

Why not ask a nanny to take care of the father?

Liu Peiqiang said that it is only natural for children to honor their parents, so please don't worry about it.

"I often educate my children to be filial, and now I have to behave." Liu Peiqiang said with a smile.

At 8 am, when the reporter came to Liu Peiqiang's home, he had cooked preserved egg and lean meat porridge for his father.

Although Liu Shuncai in a wheelchair cannot move, his complexion is ruddy.

In order for his father to drink a bowl of hot porridge, Liu Peiqiang often wakes up at 6 am to prepare breakfast. He has maintained this habit for many years.

Father was paralyzed by stroke

He became a "intimate cotton-padded jacket" to take extra care

The old man Liu Shuncai was 84 years old this year. One day in 2009, he suffered a stroke while playing with flowers on the rooftop. At that time, his wife Chen Juan was cooking downstairs. He called his name several times without responding.

Chen Juan hurried to the rooftop and found that Liu Shuncai was lying on the ground, speechless and not very conscious.

Although Liu Shuncai regained some consciousness after being rescued by the hospital, Liu Shuncai's spirit became significantly worse due to severe ischemic and hypoxic cell necrosis caused by brain damage.

At that time, Liu Peiqiang was very sad.

That steel-and-iron father in the past seemed to have completely changed after a serious illness.

Since that stroke, Liu Shuncai's memory has not only deteriorated, but his language skills have also declined sharply.

He often couldn't remember whether he had breakfast, whether he brushed his teeth, whether he went to the bathroom, and even his children began to fail to recognize.

"I often teased him and asked,'Who am I?' But his father couldn't tell the name. When he was a little better, he would remember me as another child's name." The children realized then that the father It is impossible to return to the awake state of the past.

Although others don't understand what his father is talking about, Liu Peiqiang, who is with his father every day, can understand.

"I am with him every day, and of course I understand his thoughts." Liu Peiqiang said with a smile, and he felt honored to be a "translator" for his father.

Although Liu Shuncai has no consciousness now, even if he is basking in the sun in the yard, he can't leave anyone beside him.

In addition to body muscle massage, Liu Peiqiang also pinched time to feed his father with water and food.

Before each feeding, Liu Peiqiang had to fix his father in a wheelchair, and then brought a small table to feed his father bite by bite of the moderate temperature and consistency of the meal.

Because the father can only eat a little bit at a time, the feeding time can be as short as half an hour, and as long as more than an hour, it is necessary to feed several times a day.

"Sometimes, I let him open his mouth, but his mouth does not move, it will be spilled everywhere when I feed, then like a child, he should wear an apron to prevent his clothes from getting dirty. Sometimes. , I smiled and said to him,'Laodou, you are now rejuvenated.' He also smiled happily. He didn't know if he understood me or saw me smile, he also laughed."

Now, Liu Shun is inseparable for 24 hours. In order to take care of his father, Liu Peiqiang moved to live with his father.

Every night, he has to wait until his father is asleep before he can spare time to do his own thing.

As soon as there is a slight movement in the night, he will get up and check.

Liu Peiqiang said with a smile that he was the "nutritionist" of his father.

Because his father was paralyzed in bed for a long time and affected his digestion, in order to supplement his nutrition, he always tried every means to carefully prepare his father's three meals a day, eating vegetables today, fish tomorrow, and meat the day after tomorrow.

His father had a bad tooth, so Liu Peiqiang chopped up vegetables and meat to cook porridge for him. Even the fish was picked up and fed bit by bit.

"Someone told me that you should just let him eat a little less each meal, so that he has fewer bowel movements every day. I said, how can I save my father's food for the sake of saving trouble?"

On the balcony of Liu Peiqiang’s home, you can see the clothes hanging in the air and the prepared diapers everywhere. Due to the old man’s incontinence, sometimes he just changed his clothes and pulled him again. Liu Peiqiang always patiently responded to The father scrubbed his body.

"He is only in his 50s, and he already has a lot of white hair." Chen Juan said with a sob.

In recent days, due to the sudden drop in temperature, Liu Peiqiang’s task of changing and washing his father’s clothes was extremely heavy. At the end of the day, his father had to change clothes six or seven times. Important work content.

This small house of more than 50 square meters looks clean and tidy, and there is no smell at all.

But because of staying up all night for a long time and helping his father wash clothes and wipe his body, Liu Peiqiang not only grew white hair on his temples, but also his hands became rough.

People who have been bedridden will develop blisters if they do not clean their skin every day, and will develop bedsores over time, but Liu Shuncai's body is well maintained.

Behind this is Liu Peiqiang's "intimate cotton-padded jacket" caring for his father in every possible way.

To better take care of the father

He handed over the business to others to manage

Now, every night, every two hours he turns over for his father.

In front of his father, Liu Peiqiang was like a half doctor: back pat, expectoration, moxibustion, as long as it was related to his father's recovery, he took the initiative to learn.

As long as the weather permits, Liu Peiqiang will pick up his father to bask in the sun and breathe fresh air in the yard.

Mother Chen Juan is also 85 years old this year. She is relatively weak. In addition, she also has various senile diseases to take care of, so she does not have the energy to take care of her husband.

In order to take care of his father wholeheartedly, Liu Peiqiang made great sacrifices.

In fact, he is an entrepreneur who runs 6 companies and a jade collector.

But for the sake of his father, Liu Peiqiang now resigned from the position of general manager and left these businesses to others to take care of.

Since he moved to live with his father, the time spent with his wife and children has also been greatly reduced, which makes him feel guilty.

"Thanks to my wife for understanding my choice."

Liu Peiqiang said frankly that he had hesitated for a long time when he decided to leave the business to others to take care of.

"I'm less than 60 years old this year. It is an energetic age for people who run a business, but my younger brothers and younger sisters also have their own family members to take care of. They can only come and visit occasionally. If I want to go, it is better for me to take care of my father."

Why not ask a nanny to take care of the father full-time?

Liu Peiqiang said frankly that he had hired several babysitters before, but he felt that the care effect was not satisfactory.

"No matter how well the nanny takes care of him, he is definitely not as careful as his own son, or he is more accustomed to taking care of his children."

Liu Peiqiang said that respecting the old and loving the old are the traditional virtues of the Chinese nation, and he is just doing what a son should do.

There is nothing to brag about.

"My parents pulled me up with piss and piss when I was a child. Now he is paralyzed. It is only natural for me to honor him."

The sentimental and righteous "Uncle Liu"

After taking care of his paralyzed father for more than ten years, Liu Peiqiang also summed up the secret of making his father happy.

One of his secrets is to tell his father stories and jokes from his childhood in Cantonese.

"It doesn't matter if my father understands or not, tell him. Sometimes he also laughs, I don't know if he understands."

In Liu Peiqiang's memory, his father was very strict with several children, especially with him.

"Because I've been a bit naughty since I was a child, he sometimes beats me up when I make my father angry. But every time he beats me, he also feels very distressed. Ask me, "Does it hurt?" He even coaxed me with some delicious food. "In Liu Peiqiang's eyes, although his father was stern, but now he recalls it with deep love everywhere.

He said that his father had been a soldier and had been diligent throughout his life, and he had always been a moral role model in his own eyes.

In order to better take care of his father, Liu Peiqiang has never travelled for 12 years.

Sometimes because of the need to socialize at work, he will definitely rush back to his father before 9 o'clock in the evening.

"Because my father is accustomed to bathing him at more than 9 o'clock every night. Although he may not recognize me as his son, he understands that the person in front of him must be very close to him." Mentioned Liu Peiqiang, a community resident. We all sigh sincerely: "This Uncle Liu is really filial, affectionate and righteous!"

Liu Peiqiang said that perhaps in the eyes of others, caring for a paralyzed father suffering from Alzheimer's for more than ten years is a very difficult task, but he has long been used to such a life.

"It is a blessing to have an eighty-year-old father by his side and a son who can take care of him every day." Liu Peiqiang said.