65 years after the Hungarian uprising, the memory is the stake of political struggle

65 years ago, the Hungarians revolted against their communist government and the Soviet Union. Prime Minister Viktor Orbán draws the commemoration to himself, to the annoyance of eyewitnesses and relatives. 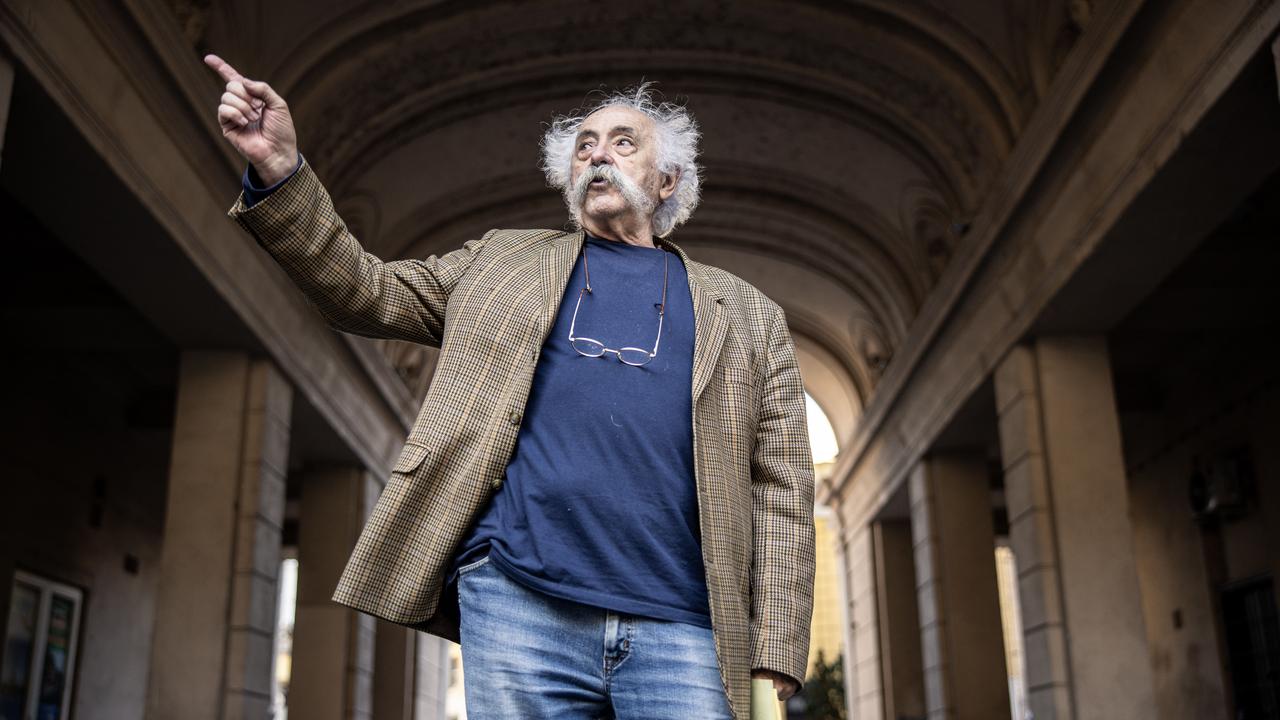 65 years ago, the Hungarians revolted against their communist government and the Soviet Union.

Prime Minister Viktor Orbán draws the commemoration to himself, to the annoyance of eyewitnesses and relatives.

Róbert Békési (80) was standing next to it when the first shots of the Hungarian Uprising were fired. He walks down the same street where he was on October 23, 1956, next to the radio station in Budapest. After a day of massive protests, a crowd wanted to go inside to broadcast their demands for reform in the communist country on the radio. She also wanted to free students who were being held there by the ÁVH (the secret service).

Burning with curiosity, fifteen-year-old Róbert left the house of his aunt and uncle, who lived around the corner.

"I didn't fight, but I've seen everything from here."

The atmosphere was elated, he recalls.

His brown eyes above his imposing gray mustache grow large, he spreads his arms: "It was as if everyone was sitting in a smelly room and suddenly all the doors and windows opened."

Békési walks along the facade with the large 'Magyar Rádió' (Hungarian radio) written on it.

"Today it is Orbán Rádió," he says scornfully.

Hungarian politics cannot get its approval.

He denounces the government's ruthlessness towards migrants.

During the border crisis in 2015, he helped refugees with food and clothing.

Katalin Jánosi, granddaughter of Imre Nagy, in front of the Imre Nagy Memorial House in Budapest.

Katalin Jánosi, granddaughter of Imre Nagy, in front of the Imre Nagy Memorial House in Budapest.

You have to resist nationalism and exclusion, he thinks.

It has to do with his own life story.

As a child, he and his Jewish family were imprisoned in the Strasshof concentration camp.

His father was shot dead on the bank of the Danube by Arrow Crosses (Hungarian fascists).

When he walked out the door in Budapest on October 23, 1956, as a teenager, world history crossed his life for the second time.

He tells how the ÁVH started firing at the crowd.

Békési, a distinguished checkered jacket over his T-shirt, dives theatrically into a portico.

"That's how people ran for cover."

He points to the street corner, where he saw a truck appear.

The Hungarian army joined the insurgents.

"A soldier started handing out weapons."

The crowd fired back.

What followed was one of the bloodiest uprisings behind the Iron Curtain.

It has been 65 years since the uprising broke out.

Decades later, a new battle has erupted over the memory of 1956. In recent years, the government of Viktor Orbán has drawn the commemoration to itself and coated it with a right-wing nationalist sauce.

He would erase the memory of Imre Nagy, one of the political leaders of the uprising, because he was a (moderate) communist.

Orbán is also accused of being at odds with the ideals of 1956, which the crowd at the radio station was so eager to send on the air: free press, fair elections, not one party in charge.

The commemoration will take place in Budapest on Saturday, with a so-called Freedom March.

Opposition parties hold their own commemoration.

In the afternoon Orbán traditionally gives a speech.

Five years ago, he called Brussels 'the new Moscow' and compared the EU to the Soviet Union.

The historical event itself becomes oppressed.

Sociologist Mária Vásárhelyi (67), who studies historical consciousness in Hungary, sees it with regret.

According to her, the government is deliberately diverting attention from the various groups that participated in the uprising, such as communists who disagreed with the Soviet Union, intellectuals and students.

Corvin köz in Budapest, the courtyard where the insurgents had their headquarters.

Corvin köz in Budapest, the courtyard where the insurgents had their headquarters.

The armed conflict and the Hungarian character of the uprising are central.

The commemoration is now, for example, about 'the boys from Pest', armed insurgents from the district of the same name.

The government says it is targeting the common man.

"But everyone who was on the left will be obliterated," says Vásárhelyi.

Vásárhelyi thinks the current commemoration is a missed opportunity.

"We have few moments in Hungarian history to be proud of. But 1956 is such an event. Then different kinds of people moved together, a rarity in this country."

Her father was one of them: he worked as a press secretary for the rebellious Prime Minister Imre Nagy.

No place for shades of gray

The uprising was crushed in early November.

Nagy and his allies were deported to Romania with their families, including Vásárhelyi, then 3 years old.

Nagy and several others were executed in 1958.

Her father was jailed.

"Under Kádár we were the enemy. Under Orbán we are again."

She too was deported to Romania after the uprising, when she was five years old.

The study in which she receives guests used to be her grandfather's bedroom.

"I was in bed with him when we heard we had to leave."

In the hilly district of Buda she tries to keep the memory of her grandfather alive.

A memorial house is now housed in a light Bauhaus villa, the former rental home of Nagy.

"There is no room for shades of gray at the current commemoration," says Jánosi.

"A leftist hero is unacceptable to Orbán."

That hasn't always been the case. A key moment in the fall of communism in Hungary was the reburial of, among others, Nagy. After his execution, he was buried in a secret place, but in June 1989 he was given a state funeral on Heroes' Square in Budapest. Jánosi remembers this as a period of hope and unity. "I couldn't imagine the divisions we know today."

The speech is seen as the start of his political career.

When Orbán praised Nagy, now he is a communist to be forgotten, a martyr at most.

At the end of 2018, his statue was clandestinely moved to a less prominent place in the city.

"The government only respects my grandfather for his death, not for his life."

He was a communist but also a popular reformer.

On October 25, the insurgents massively called for Nagy at the Hungarian parliament.

The present Soviet troops inflicted a bloodbath among the demonstrators.

Crowd on a tank in front of the Hungarian Parliament in Budapest, 1956.

Crowd on a tank in front of the Hungarian Parliament in Budapest, 1956.

Because of the escalating violence, Békési had to leave the city by his aunt and uncle, to the village outside Budapest where his mother lived. Another uncle came to the rescue, the proud owner of a motorcycle with a sidecar because of his profession as a newspaper deliverer. "Sometimes I went with him, we would collect the newspapers at midnight and deliver them to the countryside around the city until the early morning." Now the vehicle helped them escape the spiral of violence of the uprising.

That went well until they got caught between the insurgents and the tanks of the Soviet army. Békési remembers a burnt-out Russian tank with a dead soldier next to it. He holds his hand at chest height. "He was so small. If you burn, you shrink." They took shelter in the Corvin köz courtyard, where the insurgents had their headquarters. The strange thing, Békési recalls, was that as the tanks rolled through the streets, people were queuing for food at stores. In a quiet moment, Békési and his uncle managed to escape.

In that same courtyard now stands a statue of a boy with a gun, one of the 'Pest Boys'.

Békési: "Those guys fought hard. They can't help being abused by the government."

He understands that the government is going to run away with 1956. "That's politics. But why do they always have to glorify one thing and trample the rest?"

•Stalin's death in March 1953 leads to political change in the communist bloc.

In Hungary, the moderate Imre Nagy is appointed prime minister.

•Moscow disagrees with this course and replaces Nagy with his predecessor Mátyás Rákosi, who led a reign of terror between 1948 and 1953.

•The de-Stalinization in 1956 also affects Hungary.

Rákosi is replaced by another hardliner.

What follows is social unrest among the Hungarians, who want Nagy as prime minister.

The Soviet army is withdrawing.

•November 4, 1956: The Soviet Union, along with other Warsaw Pact countries, invades Hungary and crushes the uprising.

• After the uprising, János Kádár comes to power.

•November 23, 1956: Imre Nagy and other members of the insurgent government are imprisoned.

Mária Schmidt, the historian who has left her mark on the history policy of the Hungarian government in recent years, turned down an interview request from