[NHK] Both Tokyo and Osaka have decided to cancel the time saving request for restaurants from the 25th of next Monday. There are certified stores in Tokyo ... 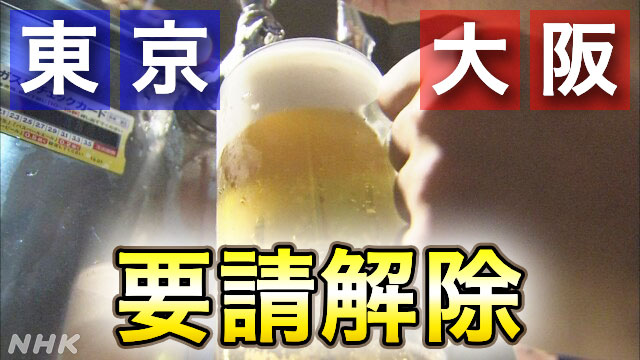 Both Tokyo and Osaka have decided to lift the time saving request for restaurants from the 25th of next Monday.

Tokyo is open to certified stores, and there are no restrictions on liquor serving hours or business hours.

On the other hand, in the United Kingdom, which was the first to relax restrictions, the number of infected people tends to increase again.

What should we be aware of as restrictions are being relaxed?

The Tokyo Metropolitan Government decided to take measures after the 25th of this month, when the "rebound prevention measures period" ended at the meeting of the new coronavirus countermeasures headquarters held on the 21st. Cancel the request for.

these restrictions will be removed.

On top of that, we ask that up to four people be guided to the same table in the same group.

For large groups, we will call for the use of an app that proves that you have been vaccinated from the 1st of next month.

It is the first time in about 11 months since November last year that the city has not requested shortened business hours for restaurants.

However, we ask uncertified restaurants to cooperate in serving alcohol by 9 pm.

the citizens of Tokyo to

act with a small number of people, avoiding crowded places and times, and

to refrain from having dinner with a large number of people.

In addition, for events after the 31st of this month, if there is a loud cheer or cheer, the maximum capacity will be up to half of the capacity.

If there is no loud voice, it is

possible to accommodate up to the maximum capacity of 5,000 people or less, and up to

The Tokyo Metropolitan Government has positioned the one month or so until the 30th of next month as the "basic countermeasure thorough period", and intends to take these countermeasures to surely suppress the re-spread of infection.

After the meeting of the countermeasures headquarters, Governor Koike told reporters, "I think that the infection is being suppressed rapidly due to the cooperation of the promotion of vaccination and infection control measures so far. However, the corona virus is being suppressed one after another. It is also true that there are many uncertainties such as new events occurring. The arrival of the sixth wave is also a concern. "

After that, "I would like to go back to the basics and take the next step based on the thoroughness and establishment of basic infection control measures such as hand washing, disinfection, wearing the correct mask, and thorough ventilation. That is not only my own life but also my family. It will protect important people and society, and will lead to the recovery and revitalization of socio-economic activities. Thank you for your continued cooperation. "

In addition, Governor Koike said, "Corona has not completely disappeared yet. Generally, the climate is dry during the winter, and it is thought that there will be more opportunities to eat and drink during the year-end and New Year holidays, and people will be more active in returning home. It is said that the risk of infection will increase. Based on the effects of the efforts of the "Basic Measures Thorough Period" until the end of November, we will consider measures for the year-end and New Year holidays. "

In Tokyo, on the 21st, 36 people were confirmed to be infected with the new coronavirus, a decrease of 26 from Thursday a week ago, falling below 50 for 5 consecutive days.

A monitoring meeting was held in Tokyo on the 21st, and the alert level of the infection situation in Tokyo was maintained at the third level from the top of the four levels.

Experts said that "the infection situation is improving" and that "it is necessary to continue to avoid high-risk behaviors and to thoroughly implement basic infection control measures."

of the total population

had completed the first

66% had completed the second

Experts say, "We need to further promote vaccination in preparation for the winter when the risk of spreading the infection is high."

He pointed out that "there is a possibility of infection even after two inoculations, and there is a risk of infecting people around you even if it is mild or asymptomatic." He called for continued avoidance of high behavior.

Osaka Prefecture has also decided to cancel requests for restaurants to shorten business hours from the 25th without waiting for the deadline of the 31st of this month.

The Osaka Prefectural Government's New Coronavirus Countermeasures Headquarters Meeting was held at the prefectural government office on the afternoon of the 21st, and the number of people in charge of new coronavirus infections continues to decrease in the prefecture, and the bed usage rate for patients is also declining. Reported.

In response to this, we have decided to cancel the request to shorten the business hours to restaurants and refrain from serving alcoholic beverages from the 25th of this month, which was until the 31st of this month.

On the other hand, the dinner of a large number of people and that there is a high risk of infection

We have decided to request that the number of

people be less than

dinner time be limited to about 2 hours.

We encourage citizens of the prefecture to use certified stores and encourage them to have a thorough mask dinner.

It is the first time in about 11 months since the end of November last year that requests for shortened hours to restaurants have been lifted throughout the prefecture.

<Osaka> Governor Yoshimura "Enjoy eating and drinking according to the rules"

At a press conference, Governor Yoshimura of Osaka Prefecture said, "Since November last year, the number of infections has increased in winter, and there is a high possibility that the infection will spread in the future. I would like to ask each person to thoroughly implement basic infection control measures so that they can enjoy eating and drinking while observing the rules so that they do not become large. "

In Kyoto Prefecture, requests for shortening business hours for restaurants, etc. will be lifted from the 22nd in all municipalities.

The restaurant, which has been temporarily closed, is preparing for the resumption of business.

The restaurant in Uji City where you can enjoy teppanyaki and Japanese food has been temporarily closed since June, but it will be about 5 from 22nd after the request to shorten the business hours and the serving time of alcoholic beverages is lifted. We will resume business for the first time in a month.

On the 21st, the store manager was busy preparing for the restart by replenishing the seasonings on the table and cleaning the beer server.

It is scheduled to be open until 1 am on the 22nd, but we are calling on customers to use one seat for up to 4 people for up to 2 hours.

Yuki Himuro, the store manager, said, "I'm happy that I can finally open a business, and I'm worried that I don't know how far customers will return as the chances of going out are decreasing. Both employees and customers share infection control measures. I want to keep a good time eating out. "

Also, at a liquor store in Yamashina Ward, Kyoto City, an order was immediately received from a restaurant, and I was busy preparing to deliver beer and other items.

At this store, the sales volume of sake dropped to about 40% of the average year last month, but the number of orders gradually increased due to the cancellation of the state of emergency and the cancellation of the request for shortening the time this time, and this month it recovered to about 80% of the average year. It means that they are doing it.

Eiji Tatsuno, the owner of the liquor store, said, "I have both expectations for the future and anxiety about Corona. It's hard. I hope that this situation will continue. "

On the other hand, Okinawa Prefecture is making adjustments to refrain from canceling the shortening of business hours required of restaurants before the deadline of 31st of this month.

Okinawa Prefecture will hold a meeting of the countermeasures headquarters from around 5:30 pm on the 21st to discuss whether to cancel the shortening of business hours required for restaurants ahead of schedule from 31st of this month.

According to the people concerned, at the meeting,

declining, the number of infected people per 100,000 population is still the worst in the whole country

, so the cancellation is postponed ahead of schedule, and the request is made until the end of this month as originally planned. It means that we are making adjustments in the direction of continuing.

<Overseas ...> More than 40,000 infected people a day even before the relaxation of restrictions in the UK

On the other hand, the United Kingdom was the first to relax the restrictions.

In July, almost all regulations on the new corona were lifted in England, which makes up the majority of the population.

However, three months after that, the number of infected people exceeds 40,000 every day, and the re-expansion of the infection is conspicuous compared to other European countries.

Health Minister Sajid Javid is currently negative about new measures, saying that the number of deaths and serious illnesses has not increased significantly.

However, the number of infections may increase further toward winter and reach 100,000 people a day, and people who have not yet been vaccinated should be vaccinated to maintain a free environment with almost no behavioral restrictions. I strongly urge you.

Regarding the re-expansion of infection in overseas countries where regulations have been relaxed, such as the United Kingdom, Professor Kazuhiro Tateda of Toho University, a member of the government's subcommittee on measures against the new coronavirus, said, "Vaccination was preceded in the United Kingdom. Although it is one of the countries, breakthrough infections have increased and increased again due to the sudden relaxation. Fortunately, neither seriously ill nor fatalities have increased significantly, but the number of infected people has increased. If this happens, a certain number of severely ill patients are expected to increase again. Vaccination is progressing smoothly in Japan as well, but if the vaccination rate rises but the rate is suddenly relaxed, the number will increase again. I think it will be necessary to raise the vaccination rate as much as possible and maintain basic infection control measures for a while. "

On top of that, "In Japan, even three weeks after the state of emergency was lifted, the trend is still declining. This time, we have been able to hold it down firmly, so I think it is time to gradually return the socioeconomics. If it is alleviated at once, there is a possibility that a rebound like overseas will occur. It is important to gradually and carefully return it. "

In addition, regarding the points to be noted in the future, "The virus has not disappeared and is still lurking in the city. In particular, it is necessary to recognize that there is always a risk of eating and drinking. Since the authentication system by the person is working well, we will first follow such rules, but in addition to using the mask effectively, whether it is ventilated, the number of people is limited to 4 or 5 and the staying time is shortened, etc. It is important for each person to consider the risk of infection and act with caution. "