Ton Derksen criticizes the Supreme Court in his new book

Philosopher of science Ton Derksen has been studying miscarriages of justice for fifteen years. In his new book The failure of the Supreme Court, he targets the highest court in the Netherlands. Because 'supreme judge' does not equal 'perfect judge'. 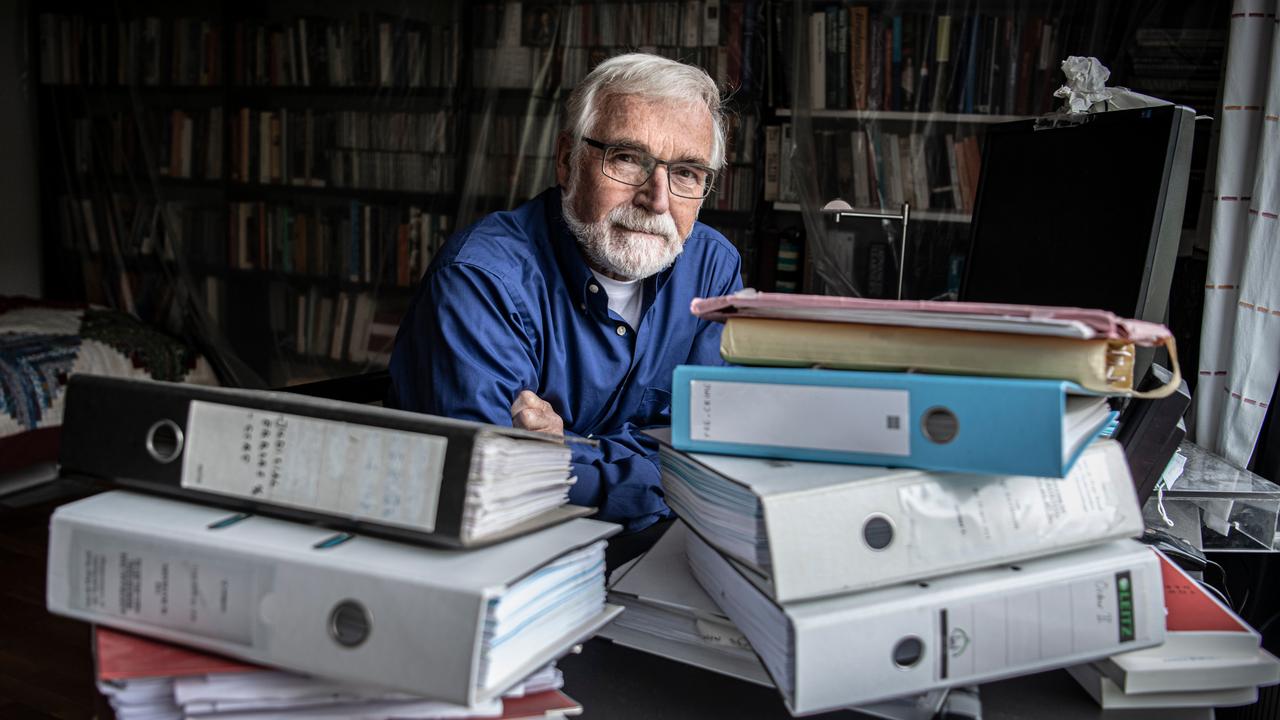 Philosopher of science Ton Derksen has been studying miscarriages of justice for fifteen years.

In his new book

The failure of the Supreme Court

, he targets the highest court in the Netherlands.

Because 'supreme judge' does not equal 'perfect judge'.

He got angry while writing this book, says philosopher of science Ton Derksen.

For two months he put the work aside altogether to prevent his anger from resounding too much.

The title of Derksen's latest work (78),

The Failure of the Supreme Court

, makes it clear what his criticism focuses on.

The Supreme Court, where more than thirty judges work, not only has the last word in ongoing lawsuits, but also decides on review requests from people who have already been irrevocably convicted.

It is precisely with requests to reopen murder cases that things go wrong, he says.

After studying eleven files in cases known as the Arnhem Villa Murder and the Butler Murder, Derksen concludes that anyone who is innocently convicted of murder in the Netherlands has a minimal chance of being released.

His book is the result of fifteen years of research, says Derksen.

That started with the case of Lucia de Berk, the nurse who was wrongly sentenced to life in prison in 2004 for the murder or attempted murder of ten patients.

"My sister-in-law was the chef de clinique at the hospital where the murders were allegedly committed. My sister is a doctor and delved deeper and deeper into the case. She came to me with questions about the conclusion that the chance is 1 in 243 million that Lucia had not committed the murders. I was promoted on probability. It turned out that there were big mistakes. The probability turned out to be 1 in 42. That's a completely different number."

While Derksen first thought he would quickly help his sister, his interest in the business grew.

The system of revisions works, Derksen thought at the time.

That picture changed after he delved into another case.

"The Supreme Court does not always appear to read carefully, sometimes completely ignores arguments and facts and incorrectly assumes that a court that carefully looked at the evidence at the time would not have changed its judgment with new material. No matter how you jump and dance , the Supreme Court continues to reject requests for review from innocent people, in my view, although the latter does not matter."

Does it matter that you think these people are innocent?

"If I had thought that they were guilty, I would indeed not have written this book. But the book is not about their innocence. I show: this is the review application, these are the arguments in the application and these strategies are used by the Supreme Court to deny the requests again and again."

Strategies suggests the Supreme Court is doing this deliberately?

"Indeed, the Supreme Court regularly ignores complete arguments for revision. The Council also seems to read applications carelessly. Is this all done deliberately? I don't know."

"The fact that we almost always find incriminating evidence outweighs exculpatory evidence is a result of how our brains work. What matters to me is that a review request is now a kind of bingo. You are unlucky or lucky if your request is granted. And usually that's bad luck."

Why would the Supreme Court do that?

"I can think of some bad reasons and decent reasons. One of the bad ones is that the butcher inspects his own meat. The thought is: I know the judge who gave this sentence, that's a good judge, he would never wrong anyone condemn."

“A second bad reason is the firm belief that most of the people who file for review applications are clever criminals trying to get through the cracks of the law. The Supreme Court's investigation into the case of Ernest Louwes (who was convicted in 2004 for the murder of a widow in what is known as the Deventer murder case, ed.) is now entering its eighth year. In some cases, it took three or four years before a decision was made."

If you leave open the possibility that people are innocent, then you do your best to deal with such a request as quickly as possible?

If you ask me, it can be done within a year.

"What also plays a role is that the Supreme Court believes it can guarantee legal certainty. The Council is afraid that if it revokes more judgments, it could give the population the impression that judges make many mistakes. That feeds mistrust in judges and thus in the rule of law."

Is that fear not justified?

"Just because there are, doesn't mean you should just let everyone down? Also, remember that if you let people in prison innocently for murder, you're letting the real killer go free."

"I am convinced that there are more than a few people in the Netherlands innocently detained. Since I have dealt with the Lucia de Berk case, I have received more than a hundred letters from people who have been in prison for a long time, saying that they are innocent. to be."

"Even if you assume that a number of them are guilty, I still think you should read all those stories carefully. I have done that and I often thought: you should at least investigate this thoroughly. Not all of them can. request a review because they don't have the resources for it. The attorney's fees to submit a review request can easily amount to 70,000 euros."

There will be more guilty people on the loose than innocent people in prison.

You could also say: in a constitutional state you should be concerned about those free perpetrators.

"I think that is a task of the police and the judiciary. As a citizen I can stand up for people who I think are innocent, I cannot designate anyone as a murderer. Although I am convinced that Ernest Louwes has been wrongly convicted, you will never tell me hear say that so-and-so did it. It's not up to me."

You accuse the Supreme Court of assuming that convicts are guilty.

You assume they are innocent.

Are you in your own tunnel?

"I make an extensive analysis of eleven files, I give footnotes and arguments. Everyone has the opportunity to check them. If you don't agree with me, then come up with counter-arguments, but don't blame me for tunnel vision. That's a free shot. "

You write that you feel hesitant to criticize the Supreme Court.

"The Supreme Court stands for legal certainty, but with dubious strategies it violates fair law itself. That is quite a statement. So I wondered whether I should say that. Yes, I decided, to improve the rule of law "The prevailing idea is that the Supreme Court is the highest there is. Legally it is, but that doesn't mean the people in it are perfect. Many lawyers only read the Supreme Court judgments. They look quite impressive. But I also read all the underlying files. And then the picture tilts."

You are a philosopher of science and not a lawyer.

Do you limit that in this work?

"No, in murder cases the question is: did Jan Klaassen murder Katrijn? That is an empirical question. Lawyers are working on the question whether a murder, for example through poisoning, can be attributed to someone. I ask the question: is this woman poisoned? If the answer is no, then no murder was committed."

Now a review request is only granted if there is a new fact that the court could not take into account at the time, while there is good reason to think that the judgment would have been different if the court had known about it.

You want to get rid of that?

"The requirement of a novelty is nonsense. If you can demonstrate that a mistake has been made, for example that the police cheated the case, then you will simply remain in prison if, according to the Supreme Court, the court already knew that the root ball was cheated."

"My book is about a more serious problem: even if your application is full of nova, it will still be rejected. This recently happened with the request for a review in the Arnhem villa murder (the resident of the house was shot dead in 1998, nine men were killed for that). convicted, ed.) and in all those other cases that I discuss. That has to change. Instead of asking if the information is new, you should ask if a person has done what he has been convicted of."

Then the matter must be completely over.

In fact, the legislator has introduced the novelty criterion to prevent things from dragging on.

Victims can never close the case.

"If someone has been wrongly convicted, then that person and his family are also victims. You have to give them a chance to be released. The system got them in prison and at a certain point the system says: now we have to close the case. But the system wrongly assumes that judges don't make mistakes."

How should it be then?

"It is not the Supreme Court, but an independent review council that has to assess the requests. This has all kinds of problems: who puts together the council and how do you ensure that it remains truly independent? The Supreme Court has smart legal minds, but they do not have the in-house qualifications to assess empirical studies. You can add scientists to a review council to remedy that deficiency."

The Supreme Court only wants to give a general, written response to Ton Derksen's book and not go into specific matters.

'The rulings of the Supreme Court in review cases are public.

Anyone can therefore take cognizance of the content of a ruling in a specific case and the considerations of the Supreme Court.

In addition, the Supreme Court annually publishes an annual report, which also includes the revision figures.

'Our latest annual report for 2020 states that in that year a decision was made in eighteen review cases, of which seven requests for review were declared well-founded, ten rejected and one declared inadmissible (a request does not meet the formal requirements, ed.).'

'Normally, a criminal case comes to an end when all appeal options have been exhausted or when the appeal periods have expired.

The decision then becomes irrevocable.

This is also of social importance: at some point a case has to come to an end.

If it is possible to continue to litigate, that would not be good for the legal certainty of all parties involved in a case.'

'Nevertheless, there is an - exceptional - possibility to revoke an irrevocable court decision.

A convicted person can submit such a request for review at any time and several times.'