[China on the Mother River] The heir of the dragon head piano on the bank of the Yellow River: I hope to perform in Beijing one day

China News Service, Aba, October 20 (Reporter Zhang Ni) "Our wish is to one day be able to perform in Beijing, that is our most yearning city." The 49-year-old Tenzin expressed his wish in front of reporters.   As the inheritor of the leading piano, he formed a unique singing team in his hometown of Hongyuan County, Aba Prefecture, Sichuan Province-Hongyuan County Masa Chengxiang singing team. 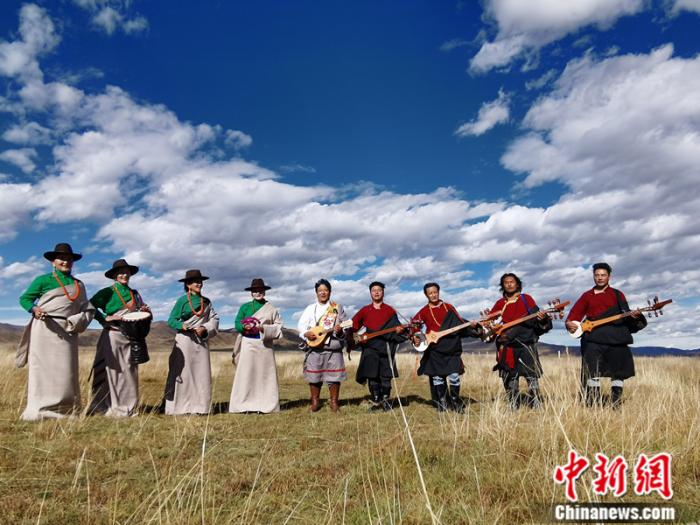 China News Service, Aba, October 20 (Reporter Zhang Ni) "Our wish is to one day be able to perform in Beijing, that is our most yearning city." The 49-year-old Tenzin expressed his wish in front of reporters.

Now this band has a small reputation in the local area, and it has become a beautiful cultural business card in Hongyuan County.

Nowadays, Longtouqin has also been preserved as the main music form in the Amdo region.

Tenzin, 49 years old this year, has been exposed to the art of dragon head piano performance since he was 16 years old. It has been more than 30 years now and has been awarded the title of representative inheritor of the dragon head piano intangible heritage in Aba Prefecture.

In 2011, Tenzin opened a training class in Hongyuan County, his hometown, and began to teach young people in the same village to play skills.

According to Tenzin, 10 of the 18 team members are poor households in his village.

"The team members usually graze and take care of their families, and they rehearse their performances in their spare time. The government will also provide some subsidies to the singing team every year, which increases the family income of the team members." Tenzin said.

The 35-year-old Yang Jin Zera is one of the most senior members of the band and the deputy captain of the band. She has been learning playing skills with Tenzing since 2011. "This is my hobby. I have been very I like these instruments, but I haven't had the opportunity to learn before."

Now, three of the sisters of Yangjin Zela's family have joined the band and become a beautiful scene in the team.

In recent years, performing with the performance team has also broadened the horizons of the three sisters.

Tenzing (first from left) and the players are playing and singing.

In recent years, the singing team has also won many awards.

For example, in 2018, the singing team won the second prize in the "Stars Award" competition at the Second Sichuan Farmers Art Festival.

It is worth mentioning that, on the banks of the Yellow River, there are also some themes related to the protection of the natural environment in the performances of the band performance.

Tenzin said that he and his team members also hope that through this form of playing traditional music, more people will pay attention to the protection of the ecological environment.

Nowadays, many children in the village have begun to learn the performance of traditional musical instruments such as the dragon head piano. Many students come to Tenzin to learn art, and he will teach the students for free.

"As long as you want to learn, you can come anytime." Tenzin said.

Nowadays, the band is becoming more and more famous in the local area. Tenzin told reporters that he and his team members still have a wish to perform in more cities and let people know Tibetan traditional music.

"We haven't been to Beijing yet. Our wish is to go to Beijing to perform someday. That is the city we most yearn for." He said.