Recep Erdogan began yesterday, Sunday October 17, 2021, a new tour in Africa, with a first stop in Angola. He will also visit Togo, then Nigeria. The Turkish president wants to strengthen ... 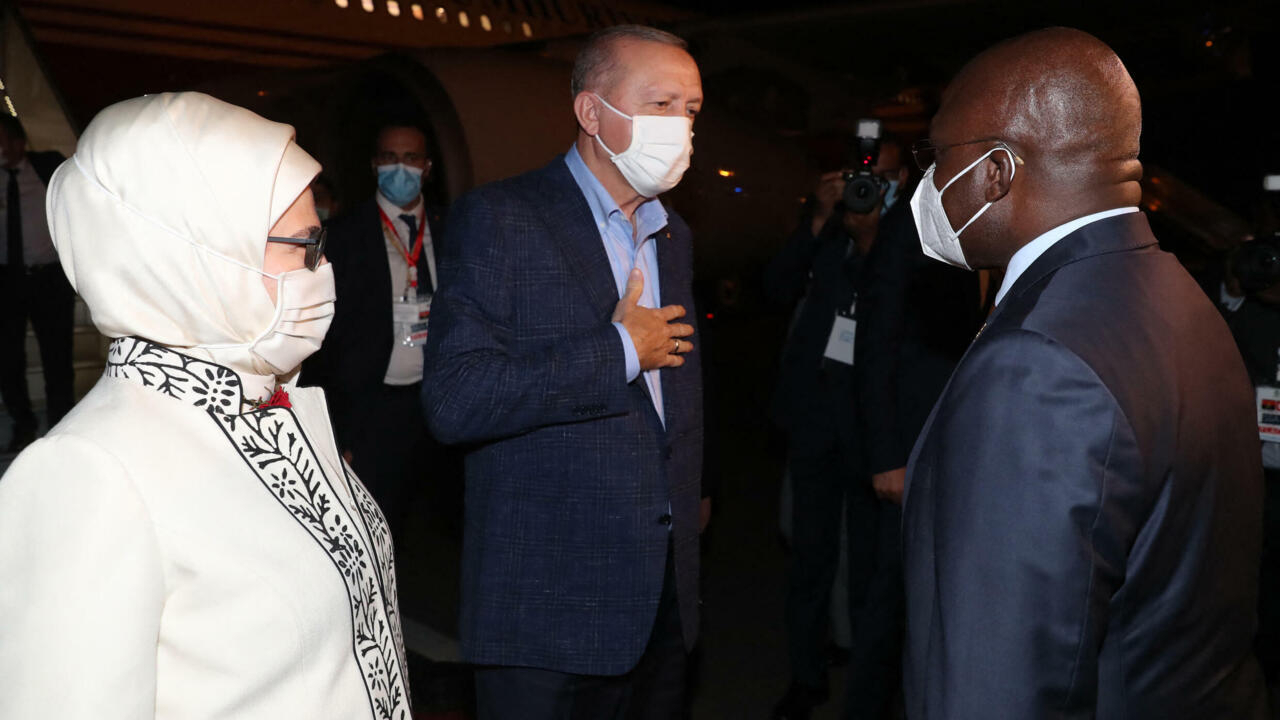 He will also visit Togo, then Nigeria.

The Turkish president wants to strengthen all-round relations with the African continent.

The economy is one of the facets of the strategic partnership between Ankara and Africa.

In Turkey's trade balance, Africa does not weigh very heavily for the moment: less than 10% of its exports against 56% to Europe and 26% to Asia.

However, the dynamic at work is very impressive: since Recep Erdogan came to power in 2003, the year he became Prime Minister, the volume of trade between Turkey and Africa has quintupled, from 5 to $ 25 billion.

A fruitful trade especially for the Turks, since their trade balance with Africa is largely in surplus.

Turkish investments on the continent have also exploded.

Almost non-existent in 2003, they now amount to 6.5 billion dollars.

This boom in economic relations goes hand in hand with intense diplomatic activity.

Recep Erdogan wanted to wake up a sleeping relationship since the demise of the Ottoman Empire. And he spares no effort: at the end of this new tour, he will have visited thirty African countries since coming to power. Turkey's 43rd African Embassy opened in April 2021 in Togo, one of the countries visited. The extension of this network has grown at the same rate as trade. Turkish Airlines is also supporting this dynamic. A new line has just been opened with Luanda, the Angolan capital; the company now serves 60 African cities.

Erdogan would like to double the volume of trade between his country and Africa.

To rebalance the trade of Turkey, oriented especially towards Europe.

And to strengthen its influence on the continent by offering an alternative to traditional interlocutors such as China or France.

The economy is only one facet of the strategic partnership with Africa, a dimension totally interwoven with Turkey's diplomatic and security interests.

Recep Erdogan could offer combat drones to his hosts

Ethiopia, Morocco and Tunisia are already buyers. They are among the appeal products of Turkish trade. With appreciated characteristics that are found for its other export products: they are less expensive than their Western equivalents, and of better quality than the Chinese. In this basket there are also basic necessities very much in demand in countries where food balances are still fragile. Turkey, for example, is the world's leading exporter of flour, the third of pasta, products of which African countries are among the leading buyers. It also sells cement, steel to build the infrastructure that Africa so badly needs, and today it offers to give a boost to theAfrican Union for its supply of anti-Covid-19 vaccine.

Ankara would like to double its trade with Nigeria, its main trading partner in sub-Saharan Africa

But a country where Turkey is still little present.

After having long focused on East Africa, Ethiopia for example absorbs a third of Turkish investments on the continent, Ankara takes care of the west of the continent.

These state visits are part of a global framework supported by other upcoming events.

Thursday and Friday will be held in Istanbul the third Turkey Africa business forum, 54 countries will be represented.

And at the end of the year forty African heads of state are expected this time for the Turkey Africa summit.

► The Chinese economy slowed sharply in the third quarter: annualized growth fell to 4.5%.

The energy crisis and the real estate crisis are starting to make themselves felt badly.

Power outages shut down factories and the fall of Evergrand discouraged purchase or construction projects.

► The automaker Stellantis announces a joint venture in the United States to manufacture lithium batteries.

The project carried out with LG energy solutions should come to fruition within two years.

The group born from the merger between Peugeot and Fiat Chrysler plans to devote a total of 30 billion euros to electrification.