Another student scandal at a hazing ritual 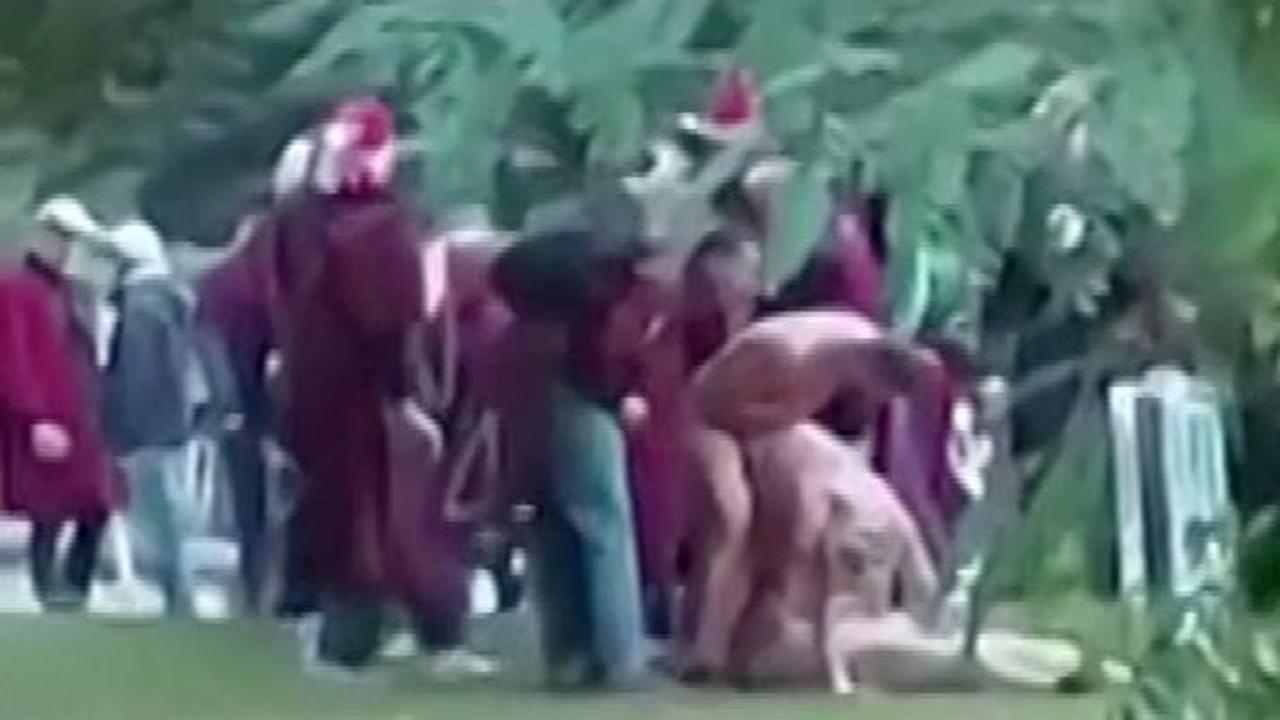 Precisely in the week that the trial for the death of Sanda Dia started, a new hazing scandal surfaced.

Shocked passers-by filmed the scene and posted the footage on social media.

The university has suspended the student club for the time being, the presidium will be called to account today by the vice rector.

This article is from HLN.

At the Cercle de Droit there is no boredom, no boredom. Our shafts are given a nice baptism. They are smeared with semen (...) and five years later they become lawyers or magistrates.

" It is a passage from the anthem of Cercle de Droit: the club that unites law students at the French-speaking university ULB. In the same song they also chant that "

all the girls, even the nuns, dream of holding our cock in their hands

The stanza leaves little to the imagination, and raises eyebrows in light of what happened on Thursday.

This happened during an initiation ritual, in which a handful of 'chosen ones' had to fulfill assignments in order to be allowed to join the student association.

Place of the event: the grassy square opposite the buildings of the Faculty of Law, in the middle of the ULB campus in Ixelles, in broad daylight.

A passer-by filmed everything and posted the images on social media.

In that video you can see how different young people writhe in their nudes against each other.

We see one of them stretched out on the grass, supposedly being orally satisfied by a girl who is bent over him on all fours - the bum pointing upwards.

Behind her is a third student, who grabs her by the hips and thrusts his sex forward suggestively several times.

A dozen members of Cercle de Droit - recognizable by their red cloaks with the letters 'CD' on them - stand in a circle around them laughing and whooping.

Marine Randoux, president of student club Cercle De Droit, does not want to comment for the time being.

Marine Randoux, president of student club Cercle De Droit, does not want to comment for the time being.

The university reacts indignantly after the leaking of the images.

Because the ULB baptismal charter states that 'student clubs commit themselves to respect the moral and physical integrity of the shafts'.

That doesn't seem to have happened here, and so Thursday's christening may still have a tail end for Cercle de Droit.

The student club has been suspended for the time being.

"All their activities have been suspended, and those responsible are expected to meet the vice rector on Monday (today, ed.)," said university spokeswoman Aurélie Rousseaux.

There they will have to answer for what happened during the initiation ritual.

The club also emphasizes that they do not oblige any student to take off their clothes, nor was there any pressure on them to perform those explicit acts. Moreover, they say, the hazing activity took place on private property and there is therefore no question of public indecency. Although the latter can be discussed. The hazing did indeed take place on the campus grounds, but there it happened in broad daylight and at a time when many people were walking past on their way to their home or to class.

It is remarkable that a new hazing scandal is now erupting, because last week the trial started in Hasselt surrounding the death of Sanda Dia. The 20-year-old engineering student died three years ago after an initiation ritual by student club Reuzegom. His death caused a shock wave in Belgium and in recent years almost all universities have developed new, stricter hazing rules that student clubs must adhere to.

For example, a new charter was signed at KU Leuven last week.

This should put an end to humiliating student hazing and also bans shaft sales.

Ghent University has not yet banned the sale of freshmen - who become 'the property' of an older student for a few days and who often have to perform humiliating tasks - but did have the student associations sign a stricter charter at the beginning of this month.

This prohibits, among other things, nudity and excessive drinking.

In Antwerp, UA rector Herman Van Goethem is also asking for a ban on the sale of shafts.

Education alderman Jinnih Beels (Vooruit) announced on Twitter yesterday that the city is preparing a 'Welcome Rituals' trajectory together with students and educational institutions.

A working group has been set up for this purpose, which must draw up a renewed and contemporary hazing policy by May 2022.

It is not yet clear what the consequences will be for Cercle de Droit after Thursday's baptism that got out of hand.

The university will only decide on this after tonight's discussion.

Failure to comply with the baptism charter can in theory lead to a disciplinary sanction, which can range from a warning to a ban.